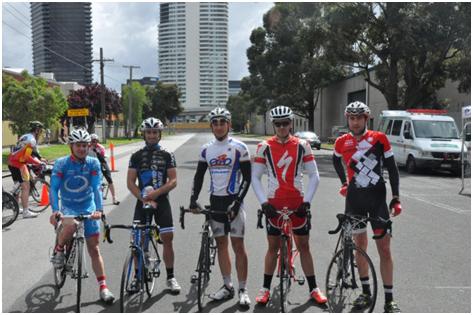 It was a cold dark wet & windy morning and it was touch and go to see if racing would be called off but we took the risk and it paid off as the rain stayed away but the numbers didn’t.

Men’s A Grade had another quality field with ex Australian Road Champion Darren Lapthorne leading the way. It was a great attacking day with the main break of the day getting a 40 second break on the field. Darren Lapthorn and Steve Waite rode a real hard mens race and didn’t care about the ugly conditions and pushed hard in the break. Riders tried to get across with Conan Daley fresh from his Masters podium the day before getting close. Norm Feile & Blasé Bourke both rode strong and pushed the chase bunch.

Eventually the break was caught and another break went immediately this time with Rico Rogers and Club Champ Chris Tymms who was fresh from forgetting his knicks the day before and failing to start the Masters Race.

With two laps to go Lapthorne pulled an absolute monster turn and just about caught the breakaway but still Rico Rogers was too good and made it 2 from 2 to take the win from Chris Tymmes with Jamie Nightingale 3rd with Search 2 Retain nice guy Thomas Donald 4th. Thomas was a little disappointed that his big hitter team mate Charles “Chucky” Howlett wasn’t there to help him. Charles was forced not to start because his girlfriend deemed it to wet and dangerous so he went off on a training ride with her instead.

In Men’s B Grade Leigh Atkins shares his experience..

After a couple of pre-race coffees thanks to the Soul Kitchen, I was amped for the race. The track was finally drying out as we rolled around for the warm up. Unfortunately, a few clouds came through and it began to rain lightly. The secret kind of rain (stealth rain) that doesn’t appear on the radar. Blue skies were on the approach and the decision was made to start racing under control. This lasted for 8 laps and as the track conditions got better, the race was started.

The pace was on straight away with a number of riders letting out their frustration on the pack stringing out the bunch. Everyone was cautious around the corners, but the pace was fierce on the straights. As the race developed, a breakaway developed and held. At some point in time, a couple more riders rode off the front to form a second chasing group but it was hard to tell from the main bunch with mud and water flying in your face.

In the final 3 laps, two groups remained clear with a few key riders trying to reduce the gap but to no avail. As the main bunch shattered on the last lap, the 3 in the lead group sprinted to the line with Kee Meng Ang (Singapore) taking the win followed closely by Lucas Renieris (Hawthorn) and Andrew Heraud (SKCC) coming in 3rd. 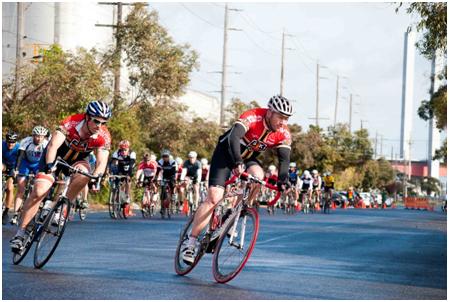 In Men’s C Grade there were some strong boys testing the legs early with Robert Merkel and Ash Abdou looking strong early. Gareth Townsend was looking a million dollars near the front of the bunch for most of the day until a wet corner caused him to slide out and donate some skin to the road. There were to be a couple more minor slide out during the race.

In the end John Mieog pulled out a monster sprint that would have made Pettachi proud to get the win ahead of Ben Robson and SKCC’s Steven Green.

Men’s D Grade had a big field of 40 riders with Steve Bean, Darren Gee & Thomas Weereratne all spending time on the front looking to get away. Everyone kept a close eye on the Columbian sensation Jimenez Alejandro who is more at home in the mountains but has been spotted recently ripping up the North Road ride. Jimenez was on his brand new bike he only got the day before. He rode 210km on it on the Saturday and then backed it up and raced Sunday. In the end this was his undoing because he just didn’t have the legs in the sprint and could only manage 3rd with Simon Whelan taking the win with the fast finishing Brad Erlkson coming second. Brad put in some serious work on the back straight to put himself in great position coming into the last corner. 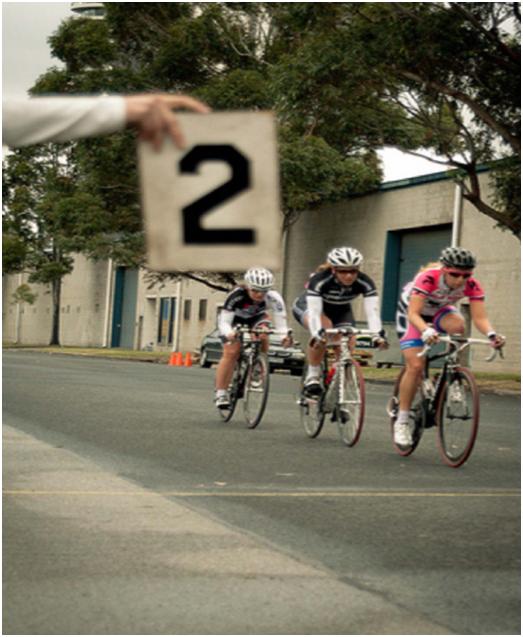 Despite wet roads and gloomy skies, there was some hot racing happening down at Port Melbourne in the women’s A Grade race. Notable on the start line was Superstar Bridie O’Donnell, back fresh from a European summer, who I can imagine wouldn’t have been liking the cooler temps Melbourne had put on! Several of the regulars, including most of the SKCC Women’s Team, were MIA as they were contesting the Aus Masters Road Race in Ballarat.

With tentative roll out for the neutral lap, and some joking about keeping things that way for another few laps, the first attack was launched coming into corner2, with Bec Locke of Prime Estate testing the legs. From there the pace was on with Bridie upping the pace TT style, and several breakaway attempts from all around. 15 minutes in, and fresh from her Aus Masters TT title earlier in the week, Nicole Whitburn (Prime Estate) launched a killer attack. Amy Bradley (Total Rush) was the only one who managed to go with her, and between the 2 of them a gap quickly formed. The apparently retired ‘Speed Queen’ Bec Domange joined after a couple of laps, showing she’s definitely still got what it takes, and with the 3 practicing their TTT skills for the upcoming Honda Tour, the pace was kept high.

An unfortunate incident in the women’s B race had the trio and the chasing bunch under neutral conditions for 2 laps, but once racing was resumed it was back to business.

Despite the tireless efforts of Ingrid Trotter (Vuelta), Tanya Matthewson, Jenni King(Torq) and Bridie, the chase bunch was never able to catch the hard working breakaway, so it was a matter of who was going to lead out the final sprint. With the Goddess of Thunder there, it was an almost certainty for her to win a full on sprint, so Amy attacked before the final corner hoping to get a jump on her. It wasn’t to be, and she was easily overpowered in the closing metres with Nicole taking home the chicken dinner! Amy held on for 2nd, with Bec rounding out the podium in 3rd.

Women’s B Grade was hyped up to be the race of the day when word got around former superstar Gaelene “Super Gee” Snelling had worked out how to unbolt her bike from the roof of her car and make her return to racing. However it was a false start and Super Gee was found asleep behind the Reg desk.  Lisa Byrne (Becoz) was looking in great form until she had a touch of wheels and crashed out. That left 7 tough riders to brave out the early horrible conditions with Lisa Barry taking a great win.

Women’s C Grade was run for the first time in the clubs history and further demonstrated how serious and committed SKCC are about the development and progression of Womens Cycling. It was a good size field with the only omission coming with Team Pleather expected to make their long awaited debut but unfortunately not being sighted. Helen Bean took out the first Women’s C Grade win in fine form just beating the exciting Natalie Young.

A big thanks must go to Turning Point Cycles who in conjunction with Giant provide the pit lane repairs. They had a massive day on Sunday changing 15 punctures.

Also a big thanks goes out to Heath Jackson and the guys from Bikeforce who are helping the C Grade Women with ride marshalling and assistance.  It’s going to be a big summer down at SKCC thanks to Bikeforce.