Tour of the Southwest by Dave Kelly 29 May 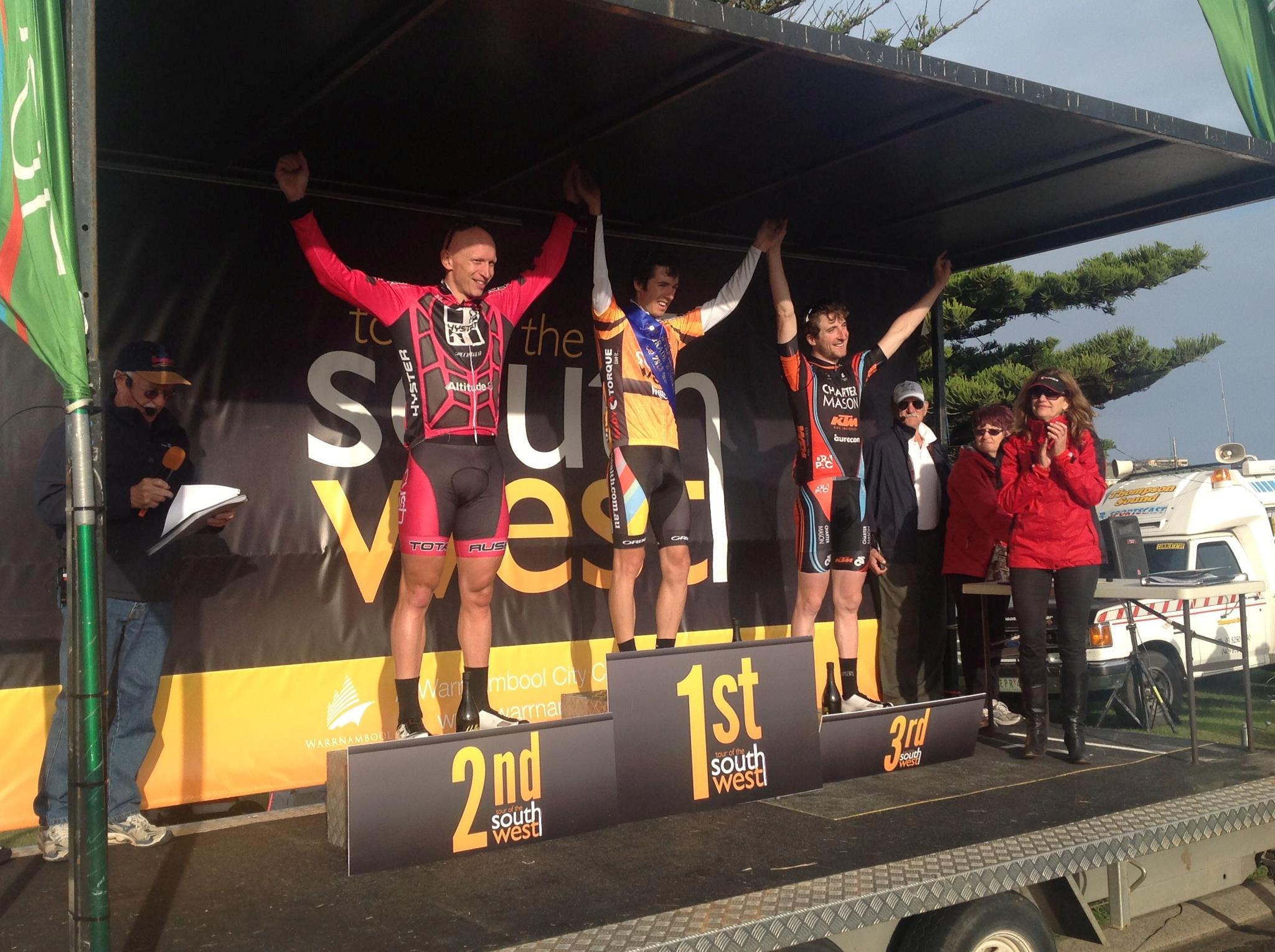 The setting of the Tour of the South West was the picturesque region of Warrnambool, the finishing location for the longest one day bike race in Australia. Though the route for the Tour of the South West did not use any of the roads the “Warny” follows, the distinctive features of the area were to play a pivotal role result of this year’s edition.

Stage 1 for the A grade men was held on Saturday morning, setting off at 10:30am to attack the 102km stage. The Total Rush Men’s and Women’s teams arrived at the Wangoom Reserve at around 9am after negotiating the myriad of road closures in place for the competitors in block 1 completing the stage.

Upon our arrival we were welcomed by the all too familiar winds of the region, these all but turning our tents into sails. Glancing around the warm-up area groups of riders could be seen having in-depth and animated discussions about what the most appropriate wheel combination would be to manage the ferocity of the wind, which was strengthening by the minute. After playing musical wheels for half an hour, final setups were decided on and it was time to test man and machine against not only the opposition but also the conditions.

With the presence of a number of NRS teams, including Search to Retain, Charter Mason Drapac, Target Trek and African Wildlife Safari one could guess how the race was going to take place… FAST AND HARD!! This was compounded no end by the absence of a neutral zone and cross winds slicing through the field like a hot knife through butter. This turned it from being a race of tactics and skill into one of pure survival.

After chasing for the first 5km at over 50km/h, constantly jumping past the wheels of fellow racers that had been “shelled” I had managed reached the front group of a select 20-30 riders out of the field of 110. This was to be the first and final selection of the race and the eventual winner of the stage was to come from this group. The next 2.5 hours ran something like this; cross tail wind, left, cross wind, left, head wind, left, cross head, left, cross tail and repeat. The constant changes made positioning vital and for the times that you found yourself out of position meant some gutter time, grovelling to stay in contact.

With a lap to go Eric Sheppard of Search to Retain went on the attack, followed by a small group of riders. In the closing portion of the race and the end in sight Eric attacked this small group managing to put time into them and remainder of the original front group. Eric eventually took the stage by 16 over second place James Buttler with the remainder of the main bunch filing in over the next minute or two as the combination of wind and hard racing had taken its toll.

The second stage was the time trial (the race of truth) on Saturday afternoon and possibly the most important stage of the weekend. Even though it was a relatively short distance, there was the potential to loose or gain significant time over the competition. The conditions from Stage one had deteriorated somewhat with wind gusts reaching nearly 50km/h. The course followed some of the roads that were in the road race but in reverse. The start was into a head-ish cross, to a straight tail (helping riders reach speeds of around 70km/h) finally finishing into a head wind. The strong winds, particularly the cross wind section, wreaked havoc on some of the more inexperienced and smaller riders with reports filtering back to the warm-up area of some coming to grief after being blown off the road. This didn’t help the confidence of the riders to follow with most of the preferred 80mm front wheels being left in the back of the car in favour for a shallower option. Even the likes of Shane Miller, who is renowned for his deep front wheel was on a tiny 24mm wheel!

The favourites for stage two were Nick Bensley and Nick Squillari. Both riders have been in great form of recent on the TT bike. Neither disappointed taking first (15:58) and second respectively (16:11). I managed a solid third and Eric Sheppard forth with Jason Spencer coming in with fifth, both recording the same time. The time trial didn’t disappoint either and as expected some of the top 10 riders after stage one had gained time whilst others lost time.

The result on GC after Stage 2 was that Eric maintained the lead whilst I moved from ninth into second, 16 seconds behind Eric and Jason moved from sixth to third, 2 seconds behind me. The stage was set for a showdown in the third and final stage of the race the following morning.

The third stage to round out the tour was to be the Criterium on Sunday set around the Warrnambool cemetery. Some would argue that this was a fitting location after two hard stages the day before and the inherent dangers involved in Criterium racing. That morning we awoke to the sound of rain, never an inspiring though to race a Crit on wet roads. As Men’s A grade started in the early afternoon and there was a glimmer hope that the rain would pass and the roads dry out, fingers crossed. Much to our delight this eventuated, enabling the field to race full and give the tour a fitting conclusion.

As with Stage 1, start positioning would be key as the first third of the lap was up a nice little burg with a gradient of about 7%. This would test the heart and mind of all riders and favoured more the climbing cyclist rather that the flatlanders. We were not disappointed off the start either with the pace on right from the gun. Search to Retain had a clear goal in mind and that was to protect the lead of Eric and they did with great effect, controlling the front for the majority of the race. I knew that the lead of 16 seconds that Eric had amassed in the preceding two stages would not be made up during this stage. I changed my focus early in the crit from trying to make up the 16 second deficit to holding onto the slim 2 second lead I had on Jason Spencer.

It was not inconceivable that the slim 2 second advantage I was holding could be over run in the crit, especially with the climb that we had to endure close to 40 times. This now became the race within the race with Jason and I shadow boxing, trying to fox each other in the bunch. With 15 minutes left to race Jason started to make his move, hitting up the climb HARD and stringing out the field into single file. Jason hit the climb lap after lap, about six times in total, and with fatigue well and truly set in, lactic acid increasing with every pedal stroke it seemed to last an eternity. Now was the moment that I had been dreading all race, it was the time to mentally shut the eyes and dig deep into that box of tricks if I wanted to hold onto that second place. With the end in sight, vomit covered knicks and the Total Rush Team on the sides yelling at me to “MOVE UP” I managed to endure Jason’s unrelenting attacks. The final play of the tour was to make sure that no gaps opened between Jason and I. Coming out of the second to last corner Shannon Johnson once again proved how fast he is by opening a gap of 20 meters on the bunch to take out the stage. The relief of crossing the finish line was enormous knowing I had managed to cling onto second place, whether was it was by hook or by crook.

I would like to congratulate (in no particular order) all the riders and teams that made the trip to Warrnambool for the Tour of the South West, the Race Organisers, Race Officials and Cycling Victoria for enabling the Tour of the South West to run. I would especially like to congratulate Eric and Jason on their races; both produced great performances and never yielded right to the end. Last but not least a big thank you to my team mates and all the staff of Total Rush this one was for you, thank you for all your support.