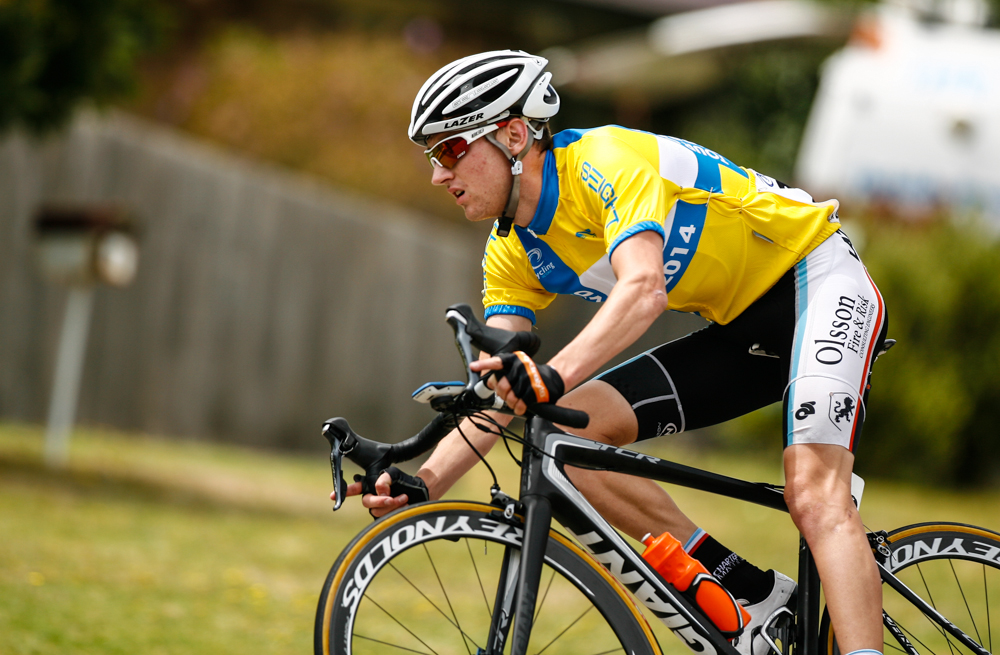 SKCC member and CharterMason Giant rider Sam Crome took out the overall classification at last week’s Tour of East Gippsland. Sam gives us his account below.

On the weekend I lined up to compete in my first Tour of East Gippsland- and indeed my first hit out since the Under 23 Road Nationals.

I came to the race thinking that I had some good form and wanted to get the year off to a good start.

Time Trial
After limited time to get familiar with my brilliant Giant Trinity Time I was keen to see seeing how I would go. I knew at the end of the Time Trial that it was a good one as I gave it everything. A result of 7th –only 7 seconds off my teammate Matt Clark’s win¬¬– was quite surprising and pleasing.

Road Race
After all of the CharterMason Giant Racing riders put in solid efforts in the morning’s Time Trial, we discussed tactics for the afternoon’s Road Race. The plan was for either Connor Murtagh or myself to look for an early break.
In the event there was not break or it was caught we were to lead Raphael Freinenstein out for the Sprint. At about the 10km mark there were a few riders going off the front. Most of the major teams had a rider in it- except for one; CharterMason! When I realised this, I kicked across to the break on the crest of the climb.
There were six of us in the move and when I saw the rest of the bunch sit up across the road, so I knew that was the ‘early break’ done. I also knew I was best placed on GC and thought we would have a pretty good chance of staying away with all the major teams represented in the move. The time gap went out pretty quick and kept on going out. Once we received a time gap of around 4 minutes I knew we would not be caught. Inside the last 10km there was a bit of cat and mouse being played and we saw Angus Morton ride off solo for a fair bit before we caught him around 3km to go. When we turned the corner into the finish I was near the back of the bunch and noticed everyone hesitated. With that I took my chance to try and catch them by surprise and hit them early up the inside. It wasn’t to be as Alistair Donohoe was too fast for me in the finish. But I was still really pleased with second and knew I would be the new GC leader.

Criterium
With only an 18 second lead going in to the last stage and over a minute on offer due to all the intermediate sprints, I knew I had the race far from won. The plan went perfectly in the Criterium as an early move snuck off the front on the first lap. I wasn’t too concerned with the guys in the move, so was happy for them to take a few of the intermediate sprints. They took the first two and then the race came back together. I knew I had to always keep sprinting for the bonus time and was riding on the wheel of my teammate Raphael who was guiding me perfectly through the race. I had a good run at the third sprint and just got over the line to take the 10 bonus seconds on offer. Once I got them I knew I was in a pretty good position. After the last sprint was over our team owner Leigh Parsons gave me the thumbs up as I was unaware how close the others were to me. We crossed the line after the finish and I quickly heard that I had kept the GC lead so I was super pleased to take the overall win for Charter mason Giant Racing.
It’s been a good start to the year and hopefully it’s a sign of good things to come. Massive thanks to my CharterMason Racing teammates and all our great sponsors for helping to make it happen.

Till next time,
Sam Crome.