The Geigerrig race Report By Jenny Macpherson 29 May 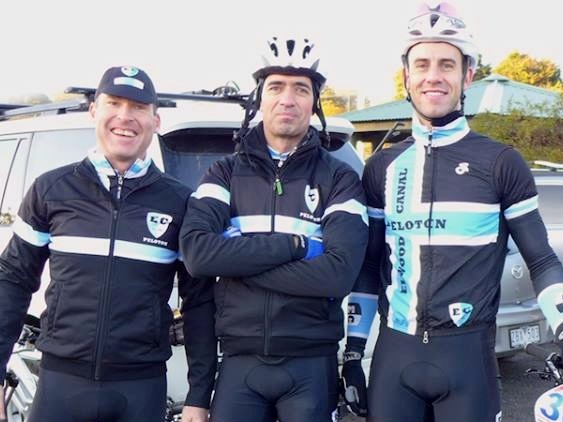 Having done Gran Fondo’s in the past on the road, the thought of doing one on the dirt and on my newly acquired Giant TCX bike was an opportunity I couldn’t resist. However, all past experiences did not come anywhere close to preparing me for what turned out to be such a memorable day at Mt Disappointment!

Arriving at 7am in the morning to a temperature of 4 degrees, I was welcomed with fires and heaters blasting out warmth across the registration area (never seen that at road race before!). Having only ever been to one off road event before, I had no idea of what I should or shouldn’t be doing before the race start… so many questions, what tyre pressure? knee warmers or not? 2 or 3 extra tubes? should I be warming up on the bike? All these things I automatically knew what to do from road racing was completely lost resulting in a bundle of nerves and excitement.

The first 15km was the most challenging part of the 90km course. Around 300 riders, mud, sharp rocks, a nail biting descent and a brutal climb that had many on their feet walking instead of on their pedals clearly sorted out who was racing and who was riding. Considering my novice dirt riding ability, I was content with riding it my own pace and getting through this section unscathed.

For the next 40km, I got to test out my CX skills riding through some beautiful tracks, made the most of the Feed stations supplying nutella & banana sandwiches, killer pythons and coffee (wouldn’t see that out at a road race either!) and enjoyed chatting to people along the way.

When I saw the 35km to go sign, it sparked a reminder that I was actually in a race and the finish line was approaching. I had been eating and drinking regularly and felt like I had plenty of energy in reserve, so with Kath O’Shea in sight I decided it was time to lift the tempo a little. Knowing Kath’s background in MTB was strong, I had no chance of keeping up with her on the descents (she was on her 26″ MTB), although I used the bigger wheels, skinner tyres of the CX bike to my advantage and pegged her back each time on the climbs.

The last 5km was all downhill, so I knew I had to have a pretty sizeable gap on Kath if I was going to have any chance of featuring in the overall women’s result. However, I was only metres in front as we crested the last climb of the day and then watched in awe as Kath disappeared in seconds leaving me to watch her dust clouds settle as I gingerly but gleefully negotiated my way down to the finish.

Congratulations to all the category winners and finishers, and thanks to the Big Hill Events team for having the commitment and motivation to provide such a unique opportunity for road and MTB riders to race and ride together on some pretty spectacular tracks so close to Melbourne… can’t wait for next year!

Meanwhile in the 65KM format
One of a few “Teams of the SKCC” represented at the event, the Elwood Canal Peloton (ECP) fielded a team of three in the 65km course format.

Probably better known for their regular Tuesday and Thursday morning beach road group rides, they have a surprising depth of MTB experience, with Mark Womersley, Alex “The Tractor” Davey and Sam Walcher lining up on 26″ and 29″ MTB’s to take on the muster of CX bikes – a sub-genre that seems to be growing in popularity every year.

The mass start brought on a flurry of speed and activity, as punters were eager to get warm in the fresh 3 degree weather. The conditions were so fresh that there was a bloke standing next to his bike at the start line in a sleeping bag. Resourceful.

Only a few km’s in, the climbing started and was absolutely relentless. A course that would surely suit “The Tractor” after recently finishing 2nd overall at the 3 Peaks event in March. Unfortunately he suffered drive-train problems and numerous flats throughout the day, enabling him to enjoy the brilliant catering and hospitality put on by the team at Big Hill Events. Espresso machine, spare tubes, C02 and sandwiches in the feed zone? You got it.

With about 10km remaining, Sam Walcher found himself pushed on the final climb as he contested the opportunity for 2nd place. He was unable to overcome his challenger in a sprint to the line, and settled for his second 3rd place finish on the MTB this year.