Teams Of The Club – Nacional 29 Aug 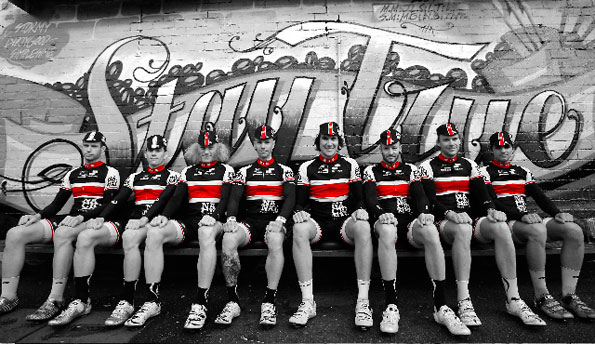 The great thing about the Australian National Road Championships, according to Malachi Moxon, “is that you can just rock up and ride”. Which is what the boys from Nacional did on 10 January this year, a fearsomely hot day on the Buninyong course outside Ballarat.

A spirit of adventure and a stylish approach to the culture of cycling – for team Nacional being serious and having fun on the bike are two sides of the same coin. In the end, Malachi and his compadres weren’t in the 50 finishers out of 133 starters but they did outlast quite a few professionals who got shelled in the frenetic first four laps, and Mark Guirguis made it around an impressive 14 times.

Nacional had its genesis in the training rides associated with Spoke(n), the bike shop previously managed by Malachi for many years, and team Degani, which four of the current team were riding with. Paul Lumicis, co-owner of Syracuse restaurant in the city, was a regular with the Spoke(n) crew. When he was setting up his new venture, Nacional, in Albert Park he approached Malachi, Jarrad Lory Smith and Simon Moody about sponsoring a new team.

Many of the core group had previous high-level sporting experience. Malachi himself is a previous Australian cross-country mountain bike champion and represented Australia. Jarrad played on the Australian beach volley ball pro-tour and lived and played in the US for a while. Lee “Hollywood” Turner played Aussie Rules at club level. The team’s philosophy is presented through its website Stay True – “staying true to your beliefs as a cyclist,” says Malachi. He describes the team as a vehicle for a group of friends who enjoyed riding together and who were competitive in A-grade. “Everyone gets on well together, there are no knobs on the team.” The initial group of four grew to eight and is now 10, ranging in age from early 20s to late 40s. They include Malachi, Jarrad, Mark, Lee, Willaim Rasin-Shaw, Hayden Kerr, Simon Moody, Nick Bensley, Tim McGrath and new “signing” Stuart Hill.

Stuey came sixth in the most recent club criterium championships and won the 35 to 40 age group.  The team’s elegant and distinctive kit was designed by Simon. Plenty of people ask if they can get a set themselves – all are refused; its wrapped up with the team’s identity; you’re either a full-time training and racing member of the team or a sponsor, no one else is allowed to wear it.

A new kit will be out soon, though, to include new sponsor, the nutrition company Winners. Nacional train hard, at least six days a week, and attend ergo sessions at RideWiser with Robert Crowe, who also gives them individual programs. The first year has delivered good results. Nick has won two road races, Malachi won a stage of the Three-Day Tour, the team picked up a win in June in a MTB race at Lysterfield and there have been some excellent placings in the SKCC A-grade crits.

In May, Nick even lined up for an open road race in Wales during an overseas holiday and came eighth. On the program for the team’s second year is the Melbourne to Warrnambool, Tour of Bright, the Nationals again, the crit season and the Adelaide criteriums during the Tour Down Under. There’s even potentially a trip to Italy, where they hope to line up at a few local races.