The sun, sort of shining through the clouds, made for a packed first race day back at SKCC. Over 250 riders across all grades made their summer season debuts, with a crowd to match!

C Grade Women and E Grade Men (48 starters!!!) kicked off proceedings with a 7:45am start. Despite the early morning, Carla Filippa was on song and took out a win, with Anna MacKay and Greta Curran rounding out the podium. Gordon Kenneway got up in E Grade ahead of Adam Chapple who came in 2nd. Cameron Davey, a new SKCC member gives his account of his first race:

Thanks SKCC I had a blast for my first E Grade race experience and the Ridewiser, Total Rush and SKCC combo is a really well oiled machine.
From the moment I arrived it all ran super smoothly and registration was a breeze. I must admit I was a bit nervous not knowing exactly what to expect but when the Ridewiser crew began by giving us some tips during the Latte Laps session, the nervousness started to subside. Rob Crowe and his team helped by throwing in some lighthearted banter and making it heaps of fun.
Once we finished the Latte Laps session and lined up on the start line armed with smiles and cornering techniques, the Total Rush team took over and explained how they would help to provide a safer race while giving pointers all the way around. They did that and also kept a good race vibe going.
After the ride and speaking with the Total Rush riders, there is a heap more I can learn from doing some more E Grade races under their guidance. So I’m looking forward to heading back next week for another hit out. Sundays just got exciting!
Cameron Davey

Cameron Davey has been riding with Total Rush and has just recently become a member of SKCC. Total Rush are a dedicated sponsor of the SKCC Criterium Race Series and when the crew from Total Rush are not supporting members on the race circuit, they are supporting them with excellent bike services and products. Renowned for their bike servicing and bike fitting analysis, Total Rush will ensure you enjoy your ride.

B Grade Women and the much hyped C Grade Men got the second race underway. The Greek National Cyclocross Champion* (*unconfirmed) Costa Chronis (StayTrue Racing) was missing for the first crit of the season, but Chris Mackay (Total Rush) was confident that he could still lay a killer blow for the win. Unfortunately for Chris, the plan didn’t go his way with Chow Ho Lee taking 1st, Ryan Cottrell 2nd and Carl Cubitt 3rd. In Women’s B Grade the competition was strong with 15 starters all capable of taking out the first crit of the season. The pink machine, Verita Stewart was active all day, and ended up 3rd, just short of Ashleigh Hocking (2nd) and Chloe Baggs (1st) taking a strong win.

D Grade Men and B Grade Men were next up as the sun started to make an appearance. 51 starters in D Grade made the racing fast and furious, with Lachlan Stevens and Steve Sutton active, however the cream rose to the top, with Chris Carter taking the chocolates from Vei Phoon (2nd) and Jared McClintock (3rd).
B Grade men was a talent pool with a number of riders coming off strong winter road seasons. The Artisan Boys, including new (podium machine) recruit Jules Fleurus were intent on doing some damage, along with the Team Canard and the new, improved and machine-like Scott Hunter who has been riding continuously with no sleep since April in preparation for this weeks Melbourne to Warrnambool. The moves were going thick and fast but the bunch would take no chances until Jules Fleurus (Artisan), Kris Hopkins (TFM) and Dustin Adderley (Rapha GT) put the hammer down and started to build up a decent lead. With the final 5 laps the breakaway lifted the pace and it was left to Fleurus and Hopkins to race to the line. Hopkins kicked away on the final lap taking the first B Grade Crit of the season, with Fleurus a solid 2nd and Ashley Peat grabbing 3rd.

The finale of the day was Womens A Grade and Mens A Grade, both kicking off at 10:45 for the summer season.
A whopping 57 starters in Mens A Grade- most in extremely tight skinsuits – meant it would be a brutal hour and 3 laps, and thats how it started. With a breakaway the order of the day, riders left little time to exchange pleasantries with the attacks starting on the second lap. Most active in the early attacks was the fake tanned, Chris Lee (Bike Gallery – Lexus of Blackburn) complete with gold chain (adds 3watts). Numerous other riders continued to push for a lead but it wasn’t until the 30 minute mark that a select group got away and worked hard to build up a lead. With most teams represented in the break, the winner would come from the split and thats how it panned out. Shannon Johnson (CharterMason Drapac Development Team) unleashed his brutal sprint (I still think there’s a motorbike under his skinsuit!) to peg back the powerful Duncan Smith and take the win (02 Networks) with Cam McDonald (Bike Gallery – Lexus of Blackburn) launching an impressive sprint to take 3rd.

Womens A Grade was jam-packed with the big names, with teams StayTrue Racing, Total Rush, Bicycle Superstore and LivGiant all represented. Little did many know, there was a former Australian Criterium Champion hiding in the bunch. Watching the time tick down and with 20mins to go, Jenny Macpherson found her wheel in stealth mode and stuck to it as the former champ launched a massive attack down the front straight. Even after 10 years out of the sport, Lizzie Williams still has an impressive turn of speed and is certainly one to watch in upcoming sprint finishes – after she’s blown all those cobwebs out of her racing legs! Clare Morgan of StayTrue Racing showed tremendous strength by stringing the bunch out for the remaining few laps to lead out Club Crit Champ and teammate Jenny Macpherson. However, the ever crafty Bec Domange and Tanya Matthewson (Bicycle Superstore) made a brave attempt to upstage the StayTrue duo with a late charge around the sweeping bend into the final corner. Jenny was able to follow Tanya’s wheel coming into the sprint finish and had enough left in the tank to power past them both and take the 1st crit win of the season. Tanya held onto 2nd place and Melina Bernecker, having a short break in Melbourne before returning to race in America, snatched 3rd.

HOW GOOD ARE CRITS!
Thanks to Ridewiser for the great work with Latte Laps and Total Rush for their fantastic continued support of SKCC Race Series.

See you all next week for Round 2! 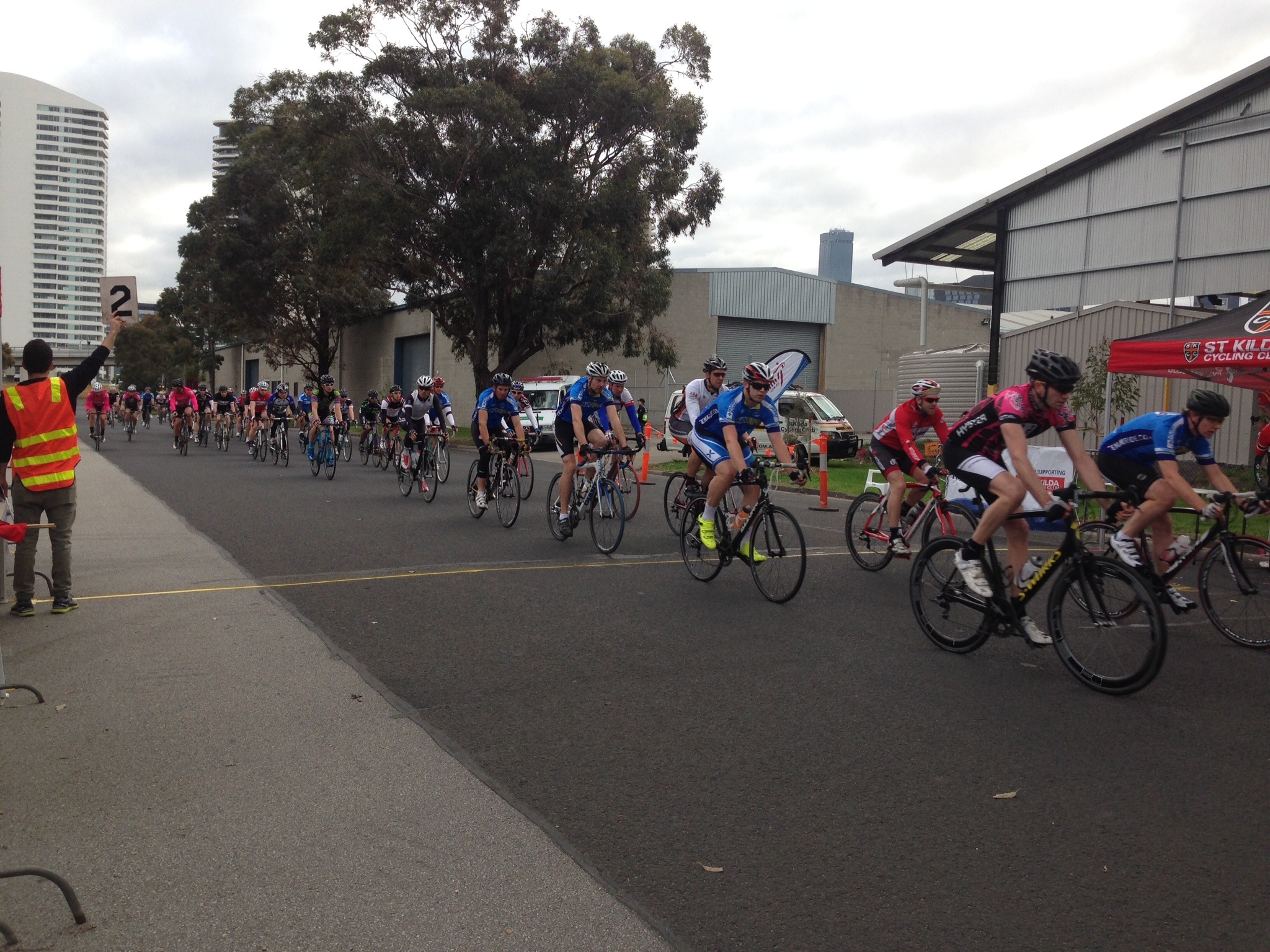 E Grade picking up the pace with 2 laps to go. Photo: Bel Dincer 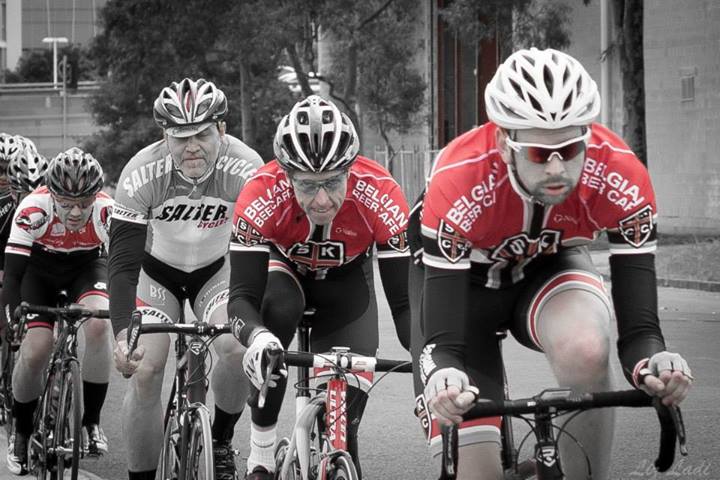 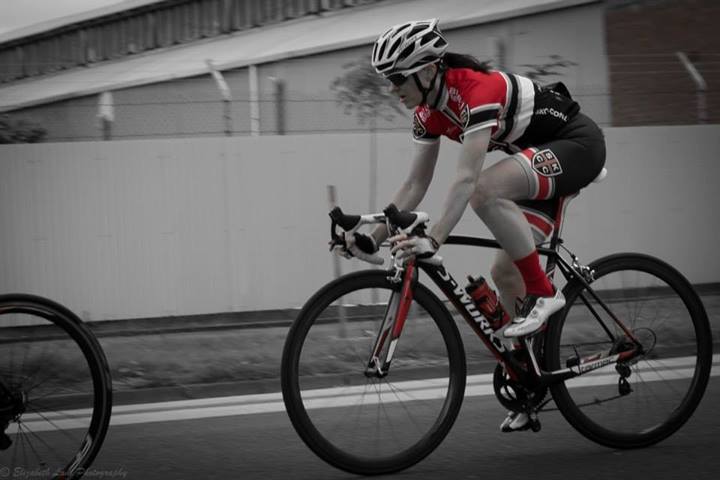 SKCC Vice Pres/ Treasurer obviously doing it easy… back there…. in the bunch. PHOTO: Kirsty Baxter

The decisive Mens A Grade Breakaway. Kudos to Matt Boys (Back Left) and Dave Kelly (Second Back Left) for making it without skinsuits….- PHOTO: Kirsty Baxter 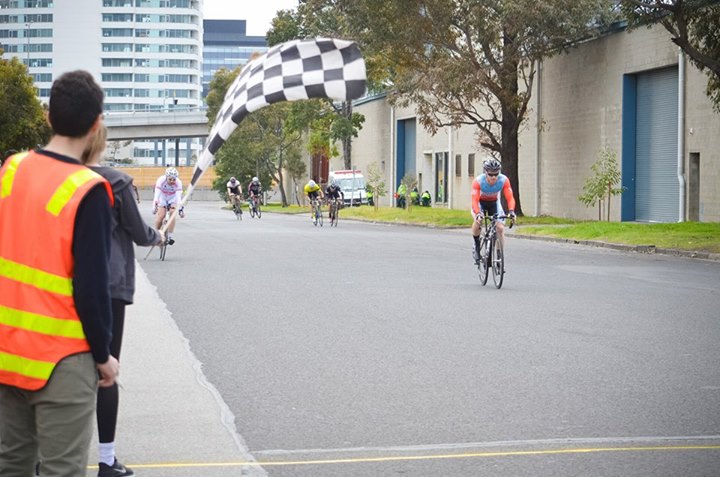