A sunny but cool day greeted a record turnout for the SKCC (World) Road Championships, with a field of 20 lining up for the start of the women’s race.  As well as competing for the title of SKCC Road Champion, Masters 2/3 and Masters 4/5 women were also vying for age group honours.  The first section of the race was under control and a good thing too! The badly scarred road was a bit of a surprise to those of us who have raced this circuit before and crosswinds gave us a hint of the challenge we were to face as the race played out over following 3 laps. 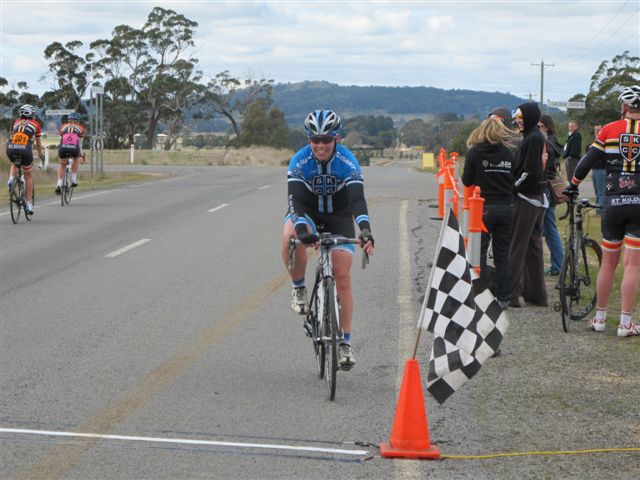 It didn’t take long for the attacks to begin. Bridget Officer launched proceedings but was quickly brought back by Justyna Lubkowski.  Clearly the xosize girls would need to be marked closely!  It wasn’t an overly hilly course, but it was expected that Miranda Griffiths would take advantage of a steep section half way around the circuit to make her attack.  When the bunch didn’t react quickly enough she got away on the rise.  Amy Bradley, Tanya Matthewson and Justyna Lubkowski, keen to bring back the break, were vocal in their encouragement to organise a paceline for the chase.  They were soon joined by Nadine Le Mescam, Cristine Foster, Alison Raaymakers and Marlena Klaic.  The girls put in solid turns and could see Miranda up the road.  By the second half of lap 3 it was clear we were now racing for 2nd and 3rd.  As we neared the last climb, the back of the bunch found a renewed energy to fight it out in the sprint.  It was a well deserved win to Miranda Griffiths who raced solo for 50 kms, her team mate Bridget Officer in second place, and Nicole Justice in third.  The Masters 2/3 category was dominated by SKCC Giant with Jodie Batchelor proving too strong in the sprint for Justyna Lubkowski and Cristine Foster and the Masters 4/5 title was claimed by Fiona Carden.

Karen headed to Canberra on the weekend to compete in the Canberra edition of the Australian duathlon series (5km run/30km ride/2.5km run).
The race start was split up, with females under 50 going off 4 minutes before the guys under 50. The girls set a cracking pace at the start, but I was determined to  race my own race and not get caught up in the frantic start. It paid off, as a few of the front runners started to tire, I was able to reel a few in. Coming out of T1 and onto the bike I was in 6th place.

The bike leg was 3 laps of an undulating course with a slight head wind in one direction. The course was  hillier than I expected, which was to my advantage. I could see where the girls in front of me were and I slowly picked them off. I was able to push the hills and head wind hard and really capitalise on the tail wind. By the second lap I had made up 3 places and was feeling strong so kept on powering along to catch the girl in 2nd place by the start of the 3rd lap. By the end of the 3rd lap I had caught first place and we came into T2 together.

The Canberra local was too strong on the last run and was able to take the overall female win. I came in 2nd female and won my age group. This was a good result considering I couldn’t train all week due to an infected blister on my little toe and my foot not fitting into any shoes until the Friday. And I figured if my foot could fit in my shoe I should be right race.

Other places the Team could be seen:

Jodie: could be seen training at Cycling-Inform Indoor Training Sessions and Beach Rd/Frankston area.
Lisa: was training on Beach road and Kew Blvd.
Alison was the Thursday ride coordinator, joined by Justyna playing the role of gatekeeper.  The ride was well attended and partcipants were really pleased with the agenda for the ride and the follow-up email from Alison with pointers on bunch riding and rolling turns.

Karen managed a training session at Albert on Saturday before heading to Canberra.