Pop Stewart Handicap
It was a perfect day for a bike race; blue skies and little wind.  I’ll be honest, I don’t love handicaps, but they are good training.

Joining me in the 16min bunch was fellow SKCC chick Eliza Bergin. 16 mins was called up, we pushed off and rolled steady turns.  I was happy to play a part in the effort.  My memory is vague but maybe three-quarters of the way into the 1st lap the 14 min group went past and we surged up, it got a bit messy.  I rolled a couple of turns and knew that I wouldn’t be able to hold that pace, decided to sit in.

Michael Sparke was unhappy to have passengers and attempted to shell the back of the bunch several times.  I should have been paying more attention, I tried to chase back on but couldn’t do it.

So I rolled on, eventually with some others who had been dropped, and then more kms on my own.  I knew that there were still faster bunches behind me, but wasn’t certain that I’d be able to hang onto them.  A lap and a half on your own is not fun but I wanted to finish.

As a fast bunch went past I managed to get onto the back of it, I think I probably stayed there for half a lap, they were moving well, I was sitting too close to the back and getting in the way, with a hill approaching I knew I was about to get dropped.  I enjoyed the scenery until the finish line.

So there it is; my perspective on the Pop Stewart Handicap at Kyneton. (by Justyna Lubkowski) 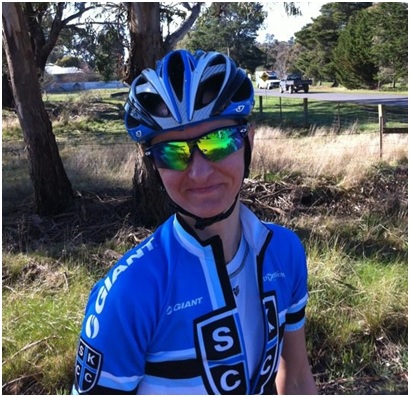 Women’s Criterium – Casey Fields
Blackburn hosted their first Women’s criterium at Casey Fields. They are trying to make this a regular feature on their race calendar when they are racing at Casey Fields. There were 11 women that competed in this first event including Jodie Batchelor from the SKCC/Giant team plus other SKCC members Amy Bradley and Grace Phang.
The women’s race was 35 minutes plus 2 laps. The race was on the bottom circuit turning at the top of the small climb each lap as the juniors were racing on the small front loop. However for the last 2 laps the women had the full course. 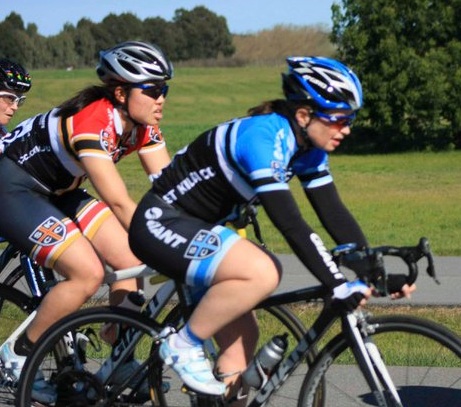 A few of the ladies struggled with the pace as the field split into a few groups, however the lead group had 7 riders. Everyone was watching Carly Williams (CCCC) and Amy, as they were setting the pace and looked like they were working together. However all of the leading 7 riders were still together when it came to the final lap. This resulting in the pace dropping right off and the field rode around 4 wide using the full width on the circuit. The sprint was started by Carly with Amy on her wheel but young Chloe Baggs from Blackburn a track rider and W15 State criterium champion powered past her with Hannah Bush (Footscray) also a track rider following closely. Final placings were Chloe, Hannah, Jodie and Emma Lyall (CCCC).

Places the team could be seen training this week –
Lisa did some training at Kew and the Dandenongs.
Justyna has been training in and around Melbourne.
Jodie was training around Frankston and commissaired at the Rob Vernon Memorial on Sunday.
Karen could be seen on the burbs ride Thursday night, Kew blvd Saturday and finished the week off with a loop from Richmond/Lillydale/Mt Evelyn/Monbulk/Emerald/Ferntree Gully/Richmond.
Alison this week has been training at Kew, Beach Rd, and some quality time with her wind trainer.