This week there was lots of racing with the SKCC Trophy Race and the Tour of Geelong/Vic Open Road Championships. SKCC Trophy Race This year Giant sponsored the SKCC Trophy Race and although the numbers were low in women’s A grade due to the Tour of Geelong the girls still raced hard with the team sponsors on the side lines. There were only 8 women in A grade, 4 from the SKCC/Giant team (Karen, Lisa, Justyna and Jodie), 2010 team member Eliza Bergin, Carma Watson back from a break, plus Grace and Marlena from the SKCC Development Squad stepping up from B grade. Due to the reduced numbers the race was shortened from 90km to 60km, so 2 laps of the course. 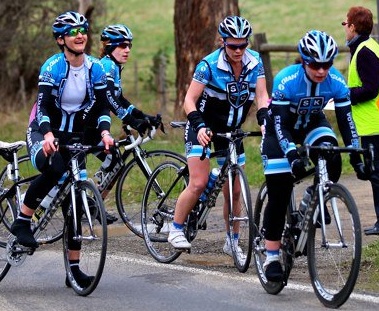 The pace was constant through most of the race, however Karen wanting redemption on the course after the 3 Day Tour went on attack 25km into the first lap up the climb on the turn into Dons Rd. Karen was out the front for about 8km before being reeled in, the lift in pace resulted in Eliza loosing contact with the bunch. The bunch was working well together but we were caught by men’s D grade in Lancefield. With D grade then not going on with it we had to lay off the pace as we were not allowed to re-overtake the bunch and we certainly did not want to get to the sprint with them just ahead. There was a bit of mixed emotions in the bunch, some happy to rest the legs before the final few km but others wanting to attack up the road. Once the guys got up the road a bit we continued our race. 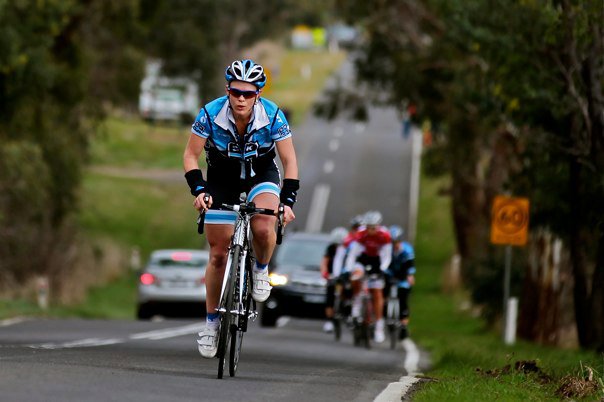 Karen up the road on lap 1 – photo Adrian Vlok

On the turn up Dons Rd the bunch broke, 4 rides upfront were Karen, Justyna, Jodie and Carma. With a steady tempo we gradually pulled away from the 3 chasers. Then at 3km to go Karen jumped and was going to the line solo. With Jodie and Jus not wanting to risk Carma taking the win from the team the pace dropped a bit with Karen getting closer to line. With the pace dropping the 3 chases were almost back on, so Jus got to the front to lift the pace and Jodie grabbing her wheel. Around the final bend for the finish we could see that Karen was starting to tire. Jus was on the front pulling a big turn, Jodie kicked for the final sprint but could not quite catch Karen. A fantastic result for the SKCC/Giant team taking 1st, 2nd and 3rd placings.

Thank you to Giant for sponsoring the race and all the SKCC members that showed there support running the race. 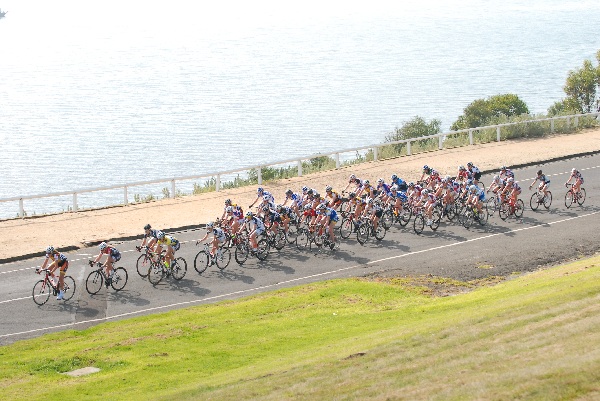 The race was 20 laps and the pace was on until about 7 laps to go, it was only at this point were chatting in the bunch could be heard. The field had shrunk by then and unfortunately Grace was no longer there. Jodie and Jus were still in the race and gave each other a few words of encouragement. Then it was on again. The next 3 laps seemed to shoot by and we were getting 4 laps to go before I knew it. The crowd was building throughout the race and lots of calls of move up were being made by coaches on the side lines. Of course with everyone being told to move up the pace lifted again. The sound of the bell for the final lap strung the field out, but with everyone wanting a good position going into the last corner up the climb all the riders swarmed again. The sprint was won by Loren ROWNEY (Bundaberg Sugar) from Jessica MUNDY (Team SASI Cycling) and third Grace SULZBERGER (Pure Tasmania & Deloitte).

It was great after the racing seeing Alison from the team had come down to cheer us on. And of course Jus, Jodie, Grace, Alison, Stephanie Ives and support crew found a local cafe and enjoyed the sun over coffee.

Other racing by the team – Karen raced her first duathlon of the season on the Sunday. After a slow start in the first run, she got moving on the bike and finished with a strong run to take to the win in her age group and finished 2nd female overall.

Places the team could be seen training this week – Lisa did some training at Kew plus a few trips out to Kinglake. Justyna has been training in and around Melbourne. Jodie was training on Beach Rd.