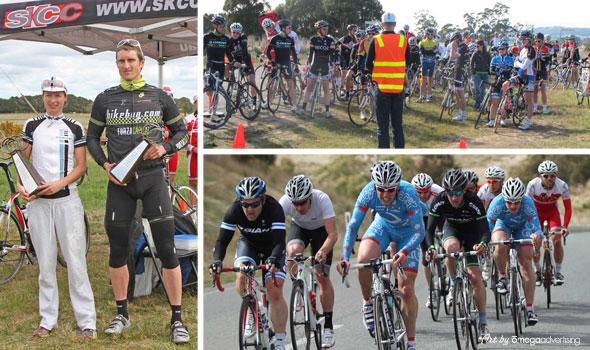 Crisp and fine conditions greeted a record 81 competitors (60 Men, 1 Junior and 20 Women) at Woodend for the SKCC (World) Road Cycling Club Championships. The 24.77km ‘big mans’ course was probably going to favour the ‘small guys’ as a brisk westerly wind picked up just as proceedings kicked off at 10am. The wind was always going to send many into the gutter and with plenty of potholes to keep riders on their toes it was going to be fitting test of physical and mental stamina, and was bound to weed out the weak to find the 2011 Mens and Womens SKCC Club Champion.

First away for the four lap (~100km) journey was mens made up of Elite and Masters 1, Masters 2/3 and Masters 4/5. As expected after a short control distance the strong riders hit the gas and blew the bunch apart, sending many to the gutter on a course which always seems to have a headwind, no matter what direction you ride in. The first lap saw a couple of crashes, broken wheels and gaps form in the bunch. After almost 37 minutes it was Mark Guirguis who drove 29 riders across the line for the first time separated by just 4.7 seconds.

No carnage for the women on the first lap of their three lap journey. Miranda Griffiths crossed the line after 44 minutes with a handy 8 second lead over the rest of the field. Tucked in nicely with the womens main bunch was Adam McGillivay the only junior brave enough to contest this course, a certain winner whatever the outcome.

Lap two of the mens race saw a breakaway of 10 riders form and they crossed the line 25 seconds ahead of the main bunch after a 37 minute lap. Notable absentees in the breakaway were Wade Wallace (O2 Networks) and Lee Turner (Sole Devotion), in form riders and recent podium winners at the SKCC Trophy Race.  These guys were probably content as they had team riders Duncan Smith (O2 Networks) and Nick (Jesus) Bensley (Sole Devotion) up the road in the breakaway. The road side book had Duncan Smith with the best odds while Adrian Vlok, Commissaire, Club President, Timer and Commentator had his money on Brad Davies.

Miranda Griffiths completed the second (bell) lap after just 42 minutes extending he solo breakaway lead over the main field to a minute and five seconds. Miranda’s blistering speed in the difficult conditions caught the bunch by surprise and plenty of riders were looking to others to do the work at the front. Junior (17) rider Adam McGillvray called it a day after lap two, finishing with a respectable average speed of 32.6 km/h taking out the junior crown.

Lap three of the mens race saw Duncan Smith driving the breakaway bunch of just eight riders across the line four and half minutes ahead of the main field, who now seemed resigned to the fact the beak was gone, judging by their relaxed lap time of 41 minutes.

The mens finish was going to come down to a sprint finish from the breakaway group. Duncan Smith went early leading Aaron Salisbury and Brad Davies up the hill. Aaron pulled out of the draft, gave one more kick to cross the line as 2011 SKCC Mens Club Champion, just 0.567 seconds ahead of Duncan and 2.399 seconds to Brad in third place. Aaron’s wining time was two hours 28 minutes and 24 seconds, averaging just over 40 km/h.  Aaron, Duncan and Brad also took out their category for Masters 2/3 while Peter Bolton (14th overall) won Masters 4/5, followed by Tim McGrath (21st overall) and Jack Carecos (30th overall) coming in 3rd. Great effort from Jack, who was out there for almost three hours. Fastest lap time of the day went to Duncan Smith who clocked 36m:37.200s.

As riders mingled for a debrief and confab they enjoyed a marvellous spread organised by master-chef, Womens Director, Registration Desk Manager Super G. Thanks to Mylaps for lending the club a timing system. All the results can be found on their website here.

Check out all the pictures from the day at the SKCC gallery here.