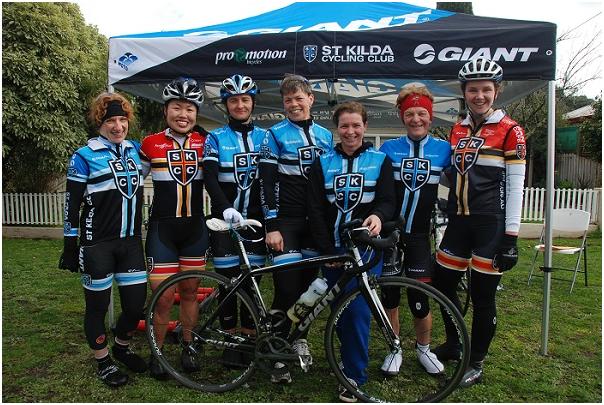 After an inspiring time trial placed Cadel Evans in the yellow jersey two SKCC/Giant teams and one SKCC Development Squad team were fired up and ready to take on the Victorian Club Team Time Trial Championships in Buninyong.

The team TT champs were held on a 50km out and back, tough undulating course that had some great tail winds on the downhill sections and headwinds for the mainly uphill return journey. At least the rain had stopped before the women started.

SKCC Masters Team
The SKCC Women’s Masters team headed out strongly and passed the Brunswick team at about 15km. A couple of kilometres further and they passed one of the CCCC riders that had been dropped from her group. Realising that the CCCC team in front was down to 2 riders we lifted the pace a little, and by the turn around we calculated we had pulled back about 30 seconds from CCCC. But we were unprepared for the strength of the head wind on the return journey. Rolling short turns and making sure we stuck together we hoped to catch CCCC but soon they were out of sight. CCCC held on for the win, SKCC/Giant 2nd and Brunswick 3rd.

Masters team together – photos courtesy of CV and David Heatley

SKCC Elite Women’s Teams
Unfortunately both the elite teams were down to 2 riders before the start due to injuries. This meant that both riders could start, but must finish together as the time is taken on the second rider.

Justyna Lubkowski says: “What can I say about the elite Team TT?  In only my second race back from injury I felt daunted at the start line. Our team of 2 starters, myself and Pip Read, had to finish with 2.

We were passed by CCCC1 not too long after the start. Counting Stephanie Ives, Nicole Whitburn & Bec Domange in the team, no wonder  they were flying !

The first hill on the course set the pattern for the rest of the race, I spent 50kms getting dropped on every hill and watching Pip riding 300m up the road, or on her wheel on the flatter or downhill sections. There was great sportswomanship on the course from other teams/competitors that encouraged me to bridge across to my team mate.

We caught CCCC2 at the turning point.  The headwind caught me off guard and I struggled to stay on Pip’s wheel.  The next 25kms were a slow grind to the finish and I was most relieved to cross the line.

Congratulations to Pip on the bronze medal, my contribution was not getting off the bike. Well done to Von Micich and Grace Phang for completing their first elite Team TT.

The team time trial builds great camaraderie and part of that team was the support provided by Gaelene, David and Fran. They were the there with tent, drinks, cheer squad, follow cars and mechanical assistance. So a big thanks from the teams to our support crew.