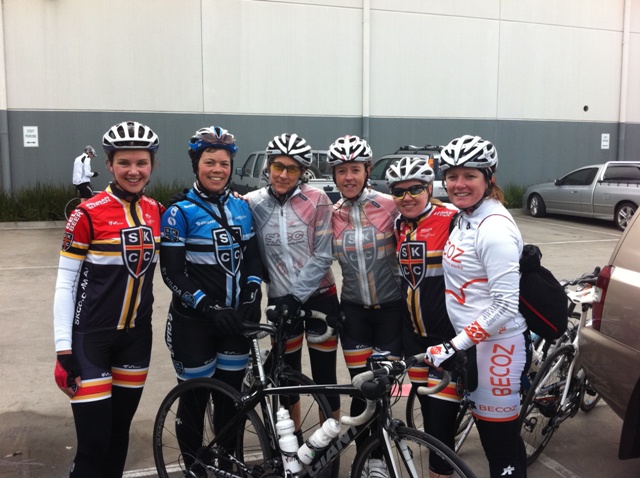 It was the last night in the mountains for the TDF, but the next morning those that could wake and make it to the Northern Combine Kermesse were racing.

The still grey misty sky eventually cleared to a beautiful sunny morning for the women at National Boulevard. It was great to see so many ladies out on the course and supporting the other grades from the side lines before/after events.

E-Grade consisted of 6 riders: Fi Carden, Claire Homsey, Michelle McMahon, Lisa Byrne, Von Micich and a junior male in yellow jersey (just what we hope Cadel will be in by the end of TDF).

E grade kept a steady pace with the ladies sharing the lead, till about halfway when Fi put the hammer down and lost Claire who got caught unawares on her first race back post knee injury. Fi put in a lot of work on the front and as the last lap came around, Michelle slipped up alongside her in the downhill tail wind finish.

Von jumped on Michelle’s wheel with Lisa following as the two ladies on front were neck and neck. Michelle pulled forward past Fi and Von seized the opportunity to launch into the final sprint, pulling away from the group to a solo win. Michelle kept the pace on to take 2nd and Lisa crossed the line followed by Fi. Claire rolled in soon after.

Alison Raaymakers competed in D Grade, along with a few other women from other clubs, and Justyna Lubkowski, Nadine le Mescam and Eliza Bergin started in C Grade along with a few familiar faces that raced at the 3 day tour in the women’s grades.