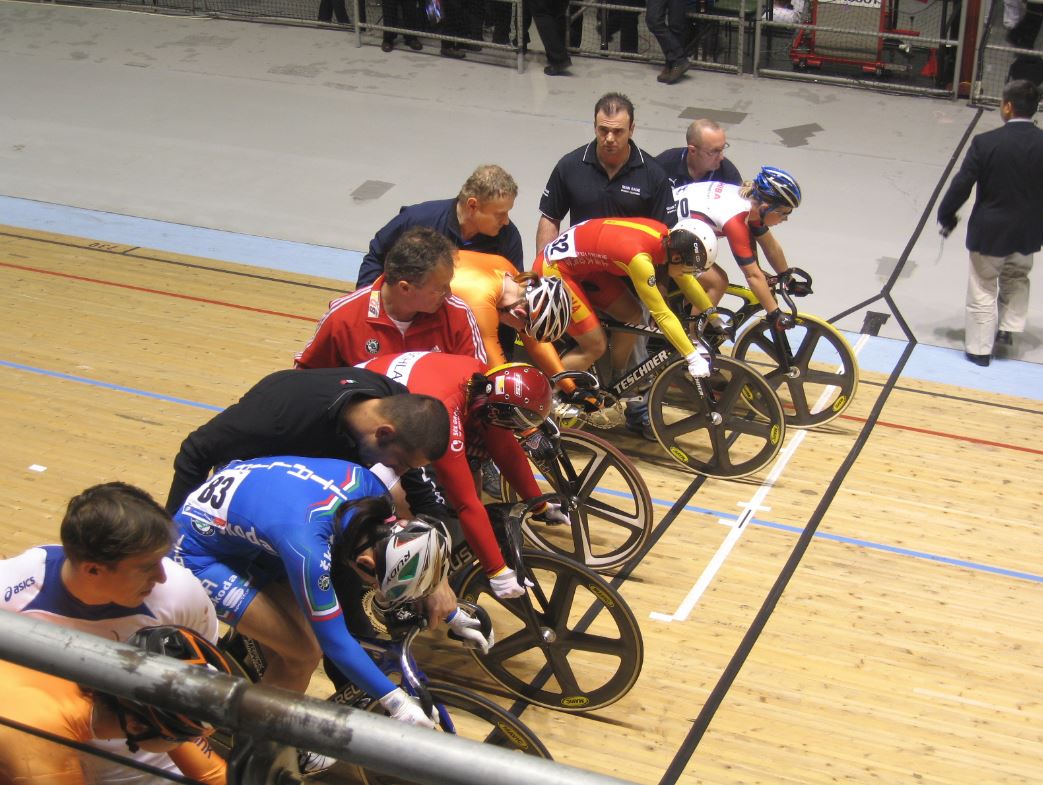 This weekend SKCC goes track racing at Disc. It’s the final night of the winter series and its back again; Keirin Racing.

If you have something on Saturday evening, cancel it. Come and watch the world’s best SKCC track riders fight it out on the track (DISC– Darebin Rd in Northcote). Racing starts at 4.30pm and spectator entry is free. Support your SKCC track riders.
Keirin Racing requires riders to line up across the track waiting for a motorbike to come through on the bottom of the track. Once the motorbike goes through underneath the riders the starter gun sounds. It’s a sprint for the riders to get on the back of the motorbike with the first three positions behind the motor preferred. Once the motorbike pulls off with 2.5 laps to go, its speed, tactics and out smarting the other riders to get to the finish line first.

Above – Samantha Sutton, one of our more experienced SKCC Women track riders explains to the other riders some tactically challengers during track racing to be aware of. Samantha went on to say, “Track racing can be won and lost in a matter of seconds and you need to be fully engaged in the race and what’s going on around you”.

The SKCC track have reserved the No.1 position again this coming season, but will find need to lift another levelif they want to have any chance of getting that top position again. Last year Brunswick and many other clubs entered numerous teams to ensure that had every chance of getting to the finals. SKCC entered one team in this category and look at the results. Well done SKCC.

This year however, teams across many clubs are expected to be very competitive and well trained. In the past other clubs have not trained much in preparation for the titles. Most clubs have begun to form teams and training for the titles is well under-way meaning SKCC will have to try harder this year if they are to retain the title.

If you’re interested in track riding and want to have a try at it, there is a scheduled “Come and Try Day” with Cycling Victoria on the 22nd September (Details from Cycling Victoria here) or come along to the next scheduled training session at Disc on the 21st September.