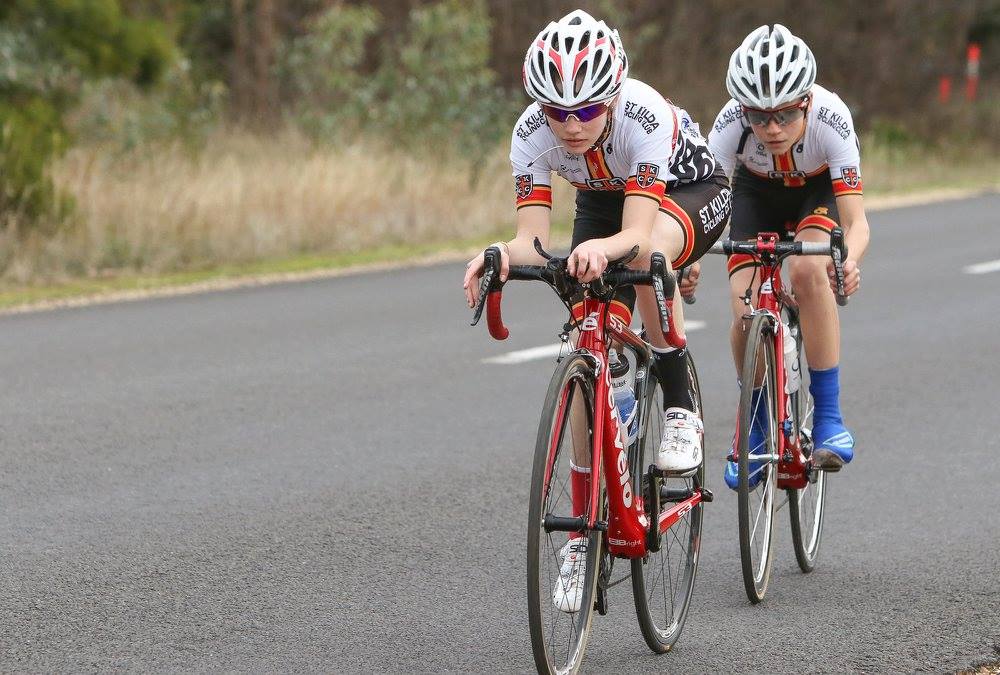 On Sunday, 28th June, all of the cycling clubs in Victoria were invited to participate in the Victorian Cycling Club Championships, which takes the form of age-category team time trials (TTT).

SKCC member, Sarah Dam shares her view from the cockpit of her TT bike, and we also get to hear from her TTT teammate Sarah Grove, as well as some words from SKCC Junior, Hamish Webber.

Sarah Dam – a tale from the Elite Women’s Race:

“Winter road racing, for me, conjurers up images of brutal side winds, drizzle and bone penetrating cold but this couldn’t have been further from the weather that welcomed us to Bendigo, with temperatures in the low teens, very low winds and sunshine glimpsing through the trees. 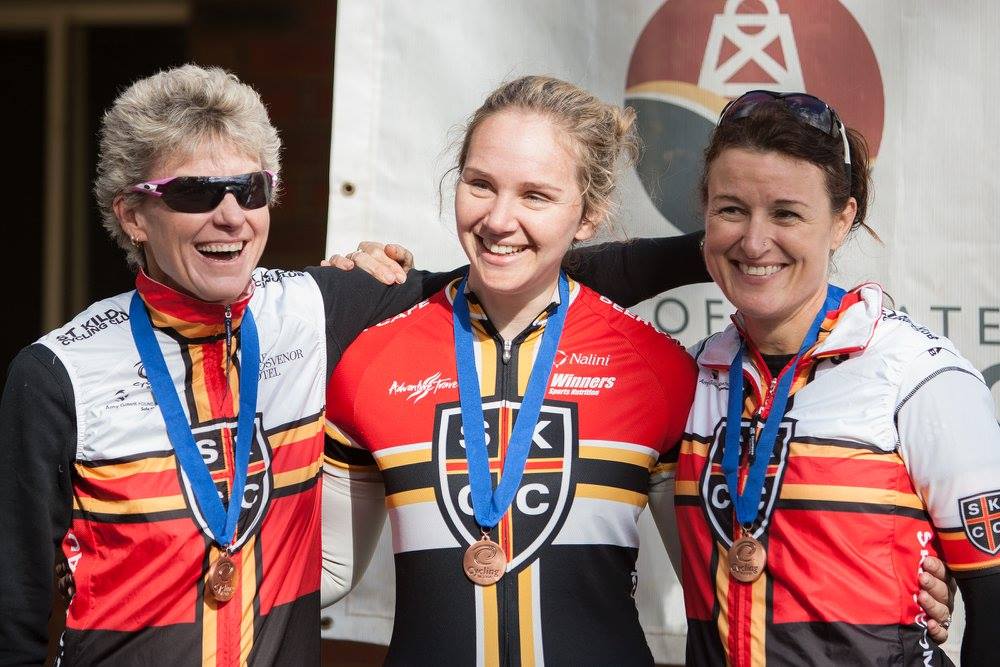 I almost didn’t make it to the start, as I fumbled the pump valve and managed to let most of the air out of my rear tire. It was only after some furious pumping that I dashed to the start line with shoe covers in my pocket, gloves still in the car and missing my gels.

I would have to do without gloves or shoe covers, and luckily my team mate had a spare gel, which would come in handy later on. After a quick “very sorry” from me, and a friendly scolding from the official for nearly being late to our 3 minute check in, we were locked in!

We were able to have a held start, and in the rush I have no idea who as holding me up as the clock counted down. ‘3-2-1-GO!’ Any nerves I might have had were left on the start line. The first thing that I realised about the course is that none of it was flat, and the second was that we had either been sent the wrong way at the first corner, or they had changed the course!

I had to put this behind me as I buried myself to hang on to my strong teamies. We reach the 15km mark and the first turn around with an average of 36.7km/h, and it was then on for another 15km up the hill to the second turn-around. The numbers told the story: I was struggling to stay on, and with 28km down, I had that sick feeling in my stomach as I knew that keeping our trio together on the climbs was costing us precious seconds.

I told them to go (2 of 3 racers need to finish for the clock to stop).  In training we had said if you are dropped keep chasing: who knows what might happen up the road, and you, or even your bike might still be needed. I took a big breath, and kept riding as hard as I could. Approaching the second turn around, I saw my team still going strong, and was glad I hadn’t lost too much time behind them.

Coming back down the hill obviously felt a lot easier and I was starting to actually enjoy the ride, with the words of Stu Mackenzie in my mind “never stop pedalling”.

We passed the junction where I thought we were being wrongly directed, and we were sent back towards the start/finish; with just 34km down, we knew that we would be done in 7km. Giving everything to the finish line saw Grove and Mortley cross in 1:10:31.5 with me behind, but still giving it everything I could.

We would have to wait for a while to get the results of the other elite women’s teams as one had started over 20 minutes late.

After waiting nervously for presentations we were announced as the winners in our category.

While cooling down, Gaelene came to ask how far we had ridden, we told her we had only ridden 41.2 (of the advertised 50km), and I was worried she would tell us that we had in fact been misdirected.  As it turns out they had changed the course at the last minute, but none of our teams had been notified.  We had followed the marshalls and luckily completed the new course. 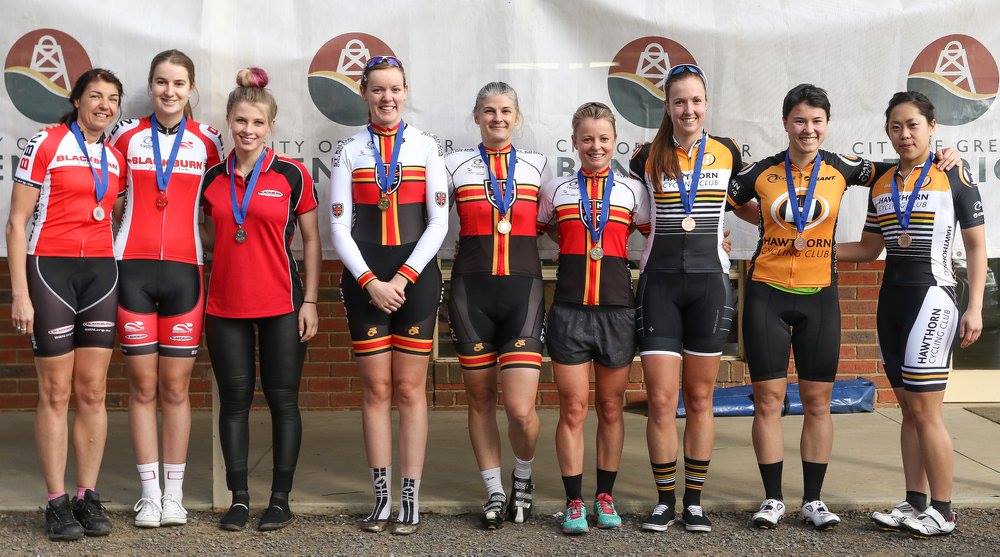 Our elite men and masters women had not been so lucky.  At the 35km junction, they had thought that they were to go straight (the original map had 3 turn around points), and they kept going, and had to be chased by officials which saw them losing lots of time, adding nearly 4km extra.

Despite the error in the route, our master’s women (Paula Fleming, Dale Maizels, Veronica Micich) still secured bronze with a time of 01:12:11.0, and their average speed shows they would have been heading for a time very close to 1 hour and gold by a few minutes.  Ever the professionals, they lodged their unsuccessful dispute, but were still full of smiles by the time presentations came around.

Elite Men – not so lucky…

The Elite men (Shane Miller, Sam Gifford, Adrian Booth) suffered a similar fate, losing minutes in the wrong direction, but still coming fourth despite also having 1 fewer than the allowed 4 riders. Cycling Victoria admitted their error, but were unable to change the result.

We could have had 5 gold medal winning teams and a clean sweep in all categories entered had the correct information been communicated, but sometimes that’s racing… 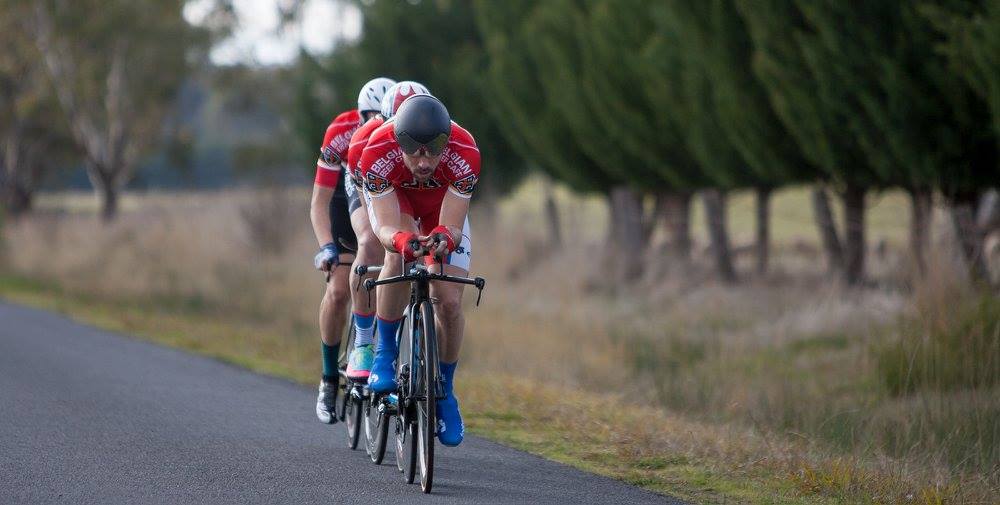 With the relocation of this year’s State team time-trial to Bendigo, we weren’t really sure what the course was going to be like, or what the conditions would bring up. Upon arriving to the start line, we were delighted to be greeted with light winds and a chilly day, which was perfect for racing!

Our team consisted of three JM19 riders: Kallum Parlevliet, Kelland O’Brien, me and Carter Turnbull, who is a bottom age JM17 riding up an age group to fill our team.

With bikes and numbers all sorted, we began our warm up, but that was abruptly interrupted when Kelland’s bike started playing up – bit of drama! Kal and I tried to do a rushed fix so we could get him on the start line and after tinkering with it for ten minutes we were able to get it in running condition. Phew!

Once on the start line, the nerves were overpowered by the overwhelming cold temperature. We started our 50km journey at a pretty reasonable pace with everyone pulling turns well. The older boys were pulling longer turns on the front in an effort to keep our younger rider Carter as fresh as possible so we could keep the four of us together for as long as possible.

All was going well until around 10km into our race a couple bumps in the road threw Kelland’s chain off the big ring, and no matter how hard he tried (whilst riding at warp speed) and repeated attempts, the chain wouldn’t jump back up, and he couldn’t hang on – so much for Kal and my bike mechanic work!

Now it was just down to the three of us. This meant that keeping Carter as fresh as possible was super important, as three riders had to finish. In an effort to do this, Kal and I were taking longer turns on the front. Approximately 20km in we passed the Blackburn team, which meant we had closed down the 2 minute gap and had secured gold.

We still pushed on for what we thought was the final 30km, however after turning into the final straight with still 12km to go, we crossed the finish line. We were puzzled, as the distance had been told to us as 50km, yet we had only completed 41km. But we weren’t complaining, as we had left it all out on the road and were pretty stuffed, which would have made the extra 9km hard to complete!

It was a great effort by the whole team, especially Carter as a bottom age JM17 (riding on restricted gears). Kal and I were especially pleased, as in the previous three years we had come second every time! The course was great, and we are looking forward to next year and defending our title. 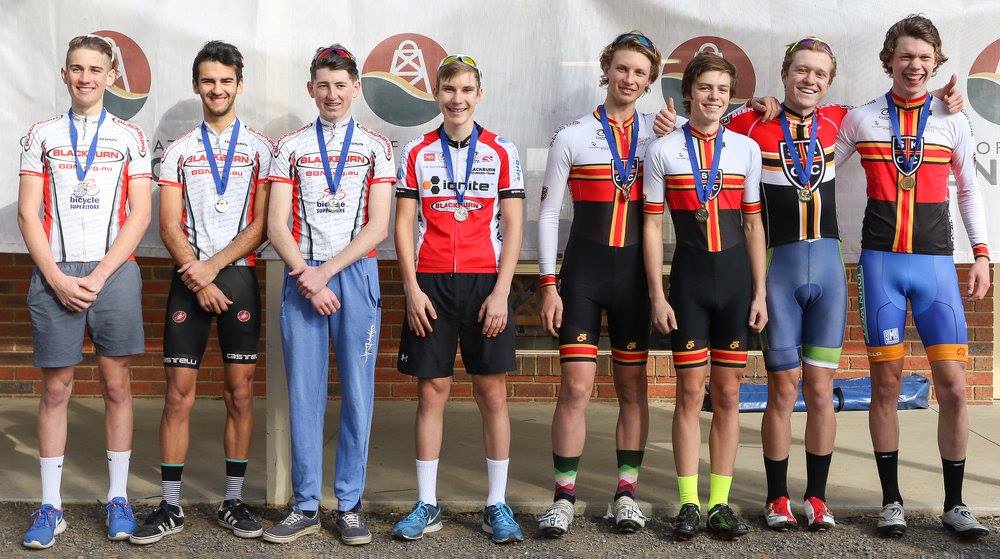 On the day Brunswick won the overall Club Champs due to their huge numbers (15 teams and 4 wins) Full results – http://www.vic.cycling.org.au/vicclubteams#0_2769B0

“Next year I will definitely be putting my hand up again and I would love to see many more SKCC members out for this amazing event, who knows we could even win the overall prize!”