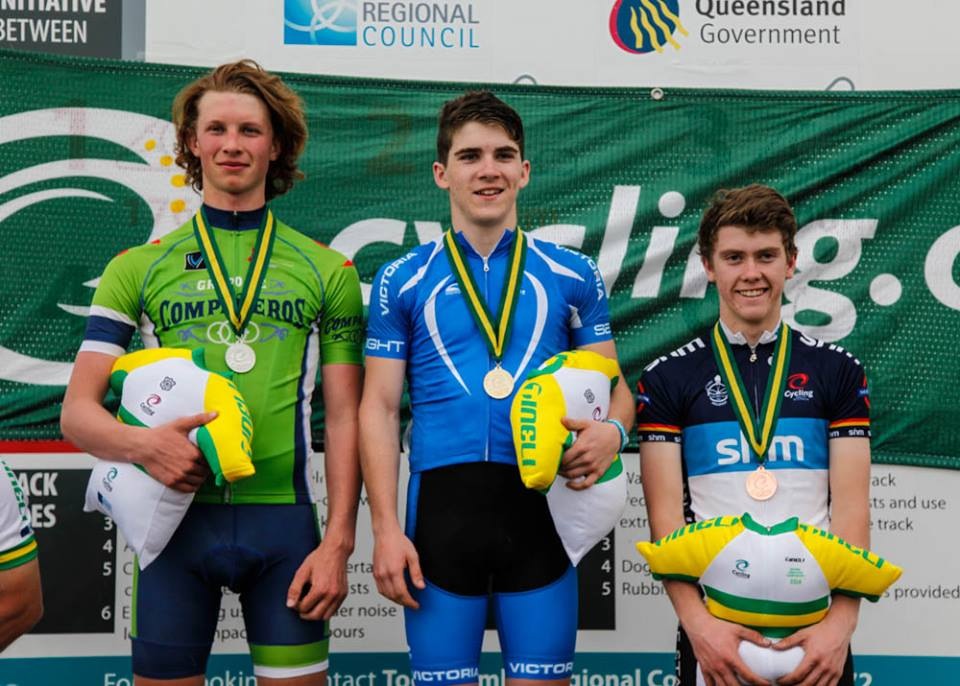 The Australian Junior Road Championships were held in Toowoomba from Friday September 12 to Sunday 14. Three juniors from St Kilda competed with Carter Turnball selected for the state team in under 15s and Hamish Webber and Kallum Parlevliet both travelling with the junior development squad “Grupo De Compañeros”.

The Individual Time Trial was conducted on the Friday with the U15 boys over 10Km and the U17 over 15Km. Carter finished 23rd after getting it all wrong at the turn around. Kallum and Hamish finished 13th and 34th of 73 starters, both improving on their state times.

Saturday had the road race with Carter designated to work for the state team; he finished 33rd over the 34Km course. The U17 race was conducted over 70Km with 5 laps of a 9km loop and a challenging 12km out and back section. The peloton wouldn’t let anyone get away until lap 3 when three Victorians broke away. With only one rider in the Big-V, the peloton may have thought they would work together however by the time they realised, the break was a minute up the road. As the other state squads started to work, the Victorian squad, with assistance from Grupo De Compañeros, neutralised all attacks policing the front of the peloton.

As the field headed for home, more concerted efforts were made, and Cam Scott from NSW, a name you will all become familiar with, single-handedly bought the break back to 15 seconds. At this time the break was reduced to 2 as they hit some short but sharp climbs 7km from home. In the sprint Godfrey Slattery (BBN) took out the Gold with Kallum Parlevliet (SKCC) taking the silver.

The criteriums on Sunday were raced aggressively, however in the JM17 race, the Victorian team ensured that no one got more than 10 seconds, as they marked every move. Unfortunately our SKCC riders weren’t able to capitalise on their great rides but they all represented the club and themselves in admirable fashion.

Results are available at metarace.com.au.