With the commencement of daylight saving the SKCC criterium season kicked off in full swing. The first crit race of the season saw fantastic numbers in the women’s races with SKCC now offering Women’s A, B & C grades! The women’s races have been extended with A grade now racing for 45 minutes plus 3 laps.

Justyna, Alison, Hannah and Jodie from SKCC Giant Women’s team met at Cafe Racer for pre-race coffee and rode to the start line together. Women’s A grade had 20 starters and a good turn out from both the Prime Estate and T.D.T BikeForce Race women’s teams. This week, three SKCC Giant team members lined up on the start line – Justyna, Alison and Hannah. Jodie supported the team from the side lines, Lisa did a great job on the registration desk and Karen competed in another duathalon.

The pace started early in the race with Kate Finegan (T.D.T BikeForce Race) getting an early solo break. This strung the field out and Alison Raaymakers (SKCC/Giant) looked to be the main chaser with the bunch hot on her wheel.

Once Kate was bought back into the fold, a notable breakaway was formed with all the teams represented including Justyna from SKCC.  The non-team racers were keen not to let this one go and Carly Williams and Ingrid Trotter worked hard to bring the break back.

With the girls not content to sit in and roll around, Kate went on the attack again. This time she was bought back fairly quickly, only for Alison to then counter attack. The bunch was attentive and quick to chase. The race ended with a bunch sprint – Nicole Whitburn (Prime Estate) with her killer kick winning the race followed by Kate and Nicole’s team mate Rebecca Locke. 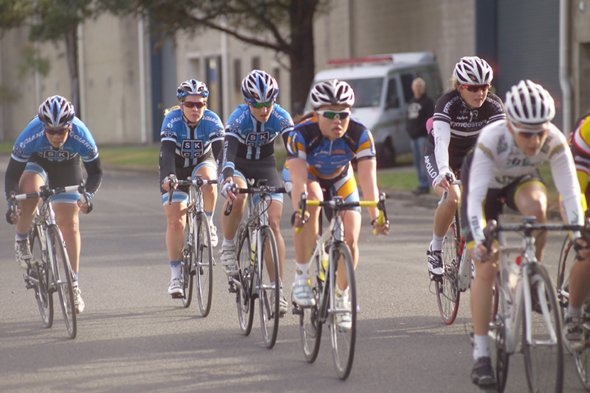 Alison starting to launch her attack through the finishing straight. . (Photo courtesy of Robbie Moore) 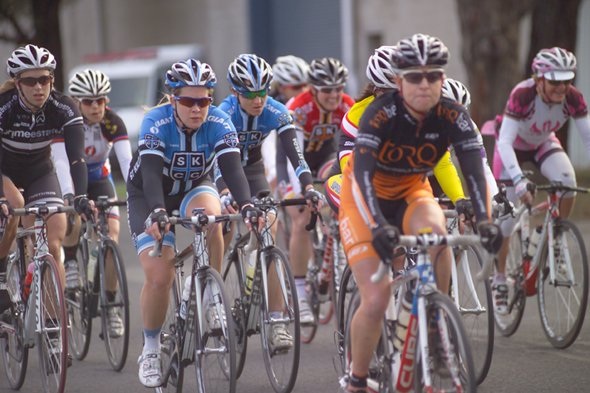 Hannah and Justyna in A grade women’s field. (Photo courtesy of Robbie Moore)

It was also good to see two of the SKCC Development Squad ladies step up to A grade after racing B grade last criterium season. Well done Grace and Nadine!

Australian Masters National Road Championships
Three of SKCC Giant team will be racing at the Australian Masters National Road Championships this week. Jodie and Alison are contesting all three races (criterium, time trial and road race) and are in the same age group (WMAS3). Justyna will be contesting the road race next Sunday in WMAS2. Best wishes to all the team and SKCC members competing.