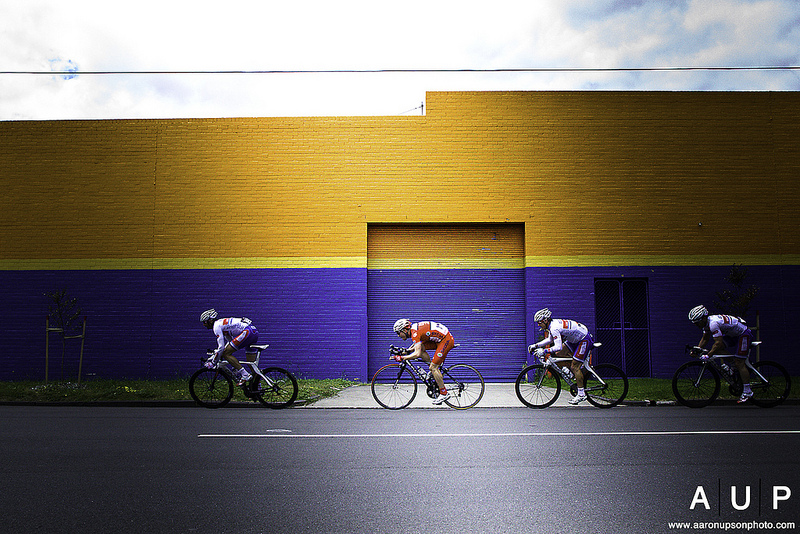 Crit season is firmly in swing, and what a season it is. Different winners are popping up each week, even an international made his mark in Mens A Grade on Sunday.
The 13 starters in E Grade braved some light drizzle and got warmed up fast with Daniel Liptak taking the win ahead of Steven Sutcliffe. C Grade Women had a small field this week but that didn’t stop Greta Curran putting the hammer down and getting the win, ahead of Samantha Sutton, 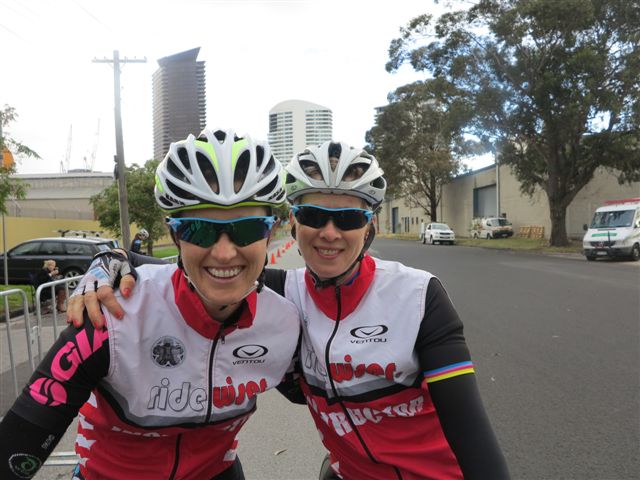 Women’s B & C Grade Ride Marshals: Left – Clare Morgan – CEO of her own famous Twitter Ride and on the right Hannah Vine – who some have said will rival Greg Henderson in the Hell Ride sprints this summer.

Next up featured C Grade Men and B Grade Women. C Grade Men has been an open affair this year with a number of different riders getting on the podium. Pete Canny (Total Rush) was back racing and looking good when the pace was on early. A few riders tried to get free throughout the race, but to no avail. Greek Champion* Costa Chronis (StayTrue Giant) was back to the summer crits for the first time and was looking tops. As the race wore on Chris McKay (Total Rush) tried his luck with a solo break, but was bought back in when the sprinters decided they wanted the win. Michael Popkiss produced an impressive display taking out the win and his second podium this summer. Riley Terrens took second and Ryan Cottrell rounded out the podium taking third.
B Grade Women had a strong 11 riders with all started able to get the win. Carla Filippa flexed some serious muscle to take the win ahead of Brooke Anderson in a spring racing floral number from Lululemon with Liz Joiner taking out third. 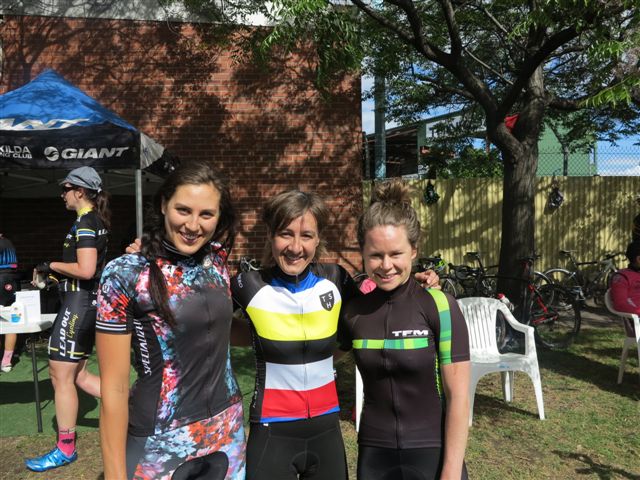 A large crowd gathered for the 9:30 start of B and D Grade Mens race. D Grade Men had a number of strong riders in the 52 person field, including a celebrity chef! With a conservative field, no one was allowed to get too far off the front, despite a couple of attempts. As the pace increased with 3 to go, the field was strung out before coming back together before the final lap. Shule Going again showed the field who was boss winning by 3 bike lengths, backing up his similar win in E Grade last week. Dave Hogan took second and Jeremy Stenning third. Shule could thank teammate Steve Dardaganis for his positioning, with Steve woking hard before ending up having a meeting with the road in the lead up to the final corner. But like a true champ he got up and stayed around to watch the remaining races.

B Grade Men had 40 starters with about 32 of them from Team Artisan/BV Sport. The Artisan boys recently lost podium machine Jules Fleurus to A Grade so team testing was on for a new leader. James Callahan, Derek Walker (the latter fined $585 for hairy legs) were back racing and in top form as was newly promoted Matt Newton. As the race wore on the pace increased with Brett “Kelletini” Kellett (Bike Gallery-Lexus of Blackburn) and Sam Watson (Zoom Racing) featuring in multiple moves. With arguably the loudest crowd at a finish in recent memory, Dimitri La Fleur – who could very well be an international DJ with that name – took out the win ahead of Paul Adler (Velobourne-Giant) and Ewyn Carter.

The final races of the day was Womens and Mens A Grade. It didn’t take long for both grades to heat up with multiple riders attempting to force a breakaway.
Womens A Grade despite only 12 starters registered one of the strongest fields so far this season and it didnt take long for them to show why. The field pushed a high pace with multiple breakaway attempts throughout the early stages being unsuccessful, until new Bike Gallery-Lexus of Blackburn recruit Lizzie Williams decided enough was enough and rode herself away from the field. Incredibly, Williams’ lead increased to almost half a lap leading into the bell lap, resulting in a terrific solo win. Second was taken by SKCC Club Champion Jenny Macpherson (StayTrue Giant) with Bridie O’Donnell (Total Rush) taking out third. 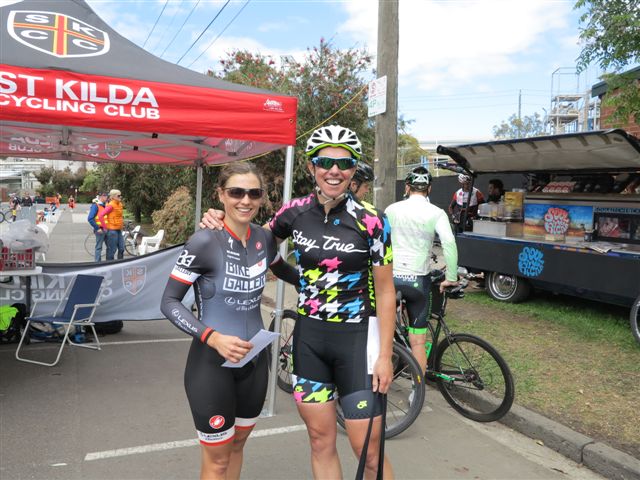 54 starters lined up for Mens A Grade including the usual teams O2, StayTrue, Bike Gallery-Lexus of Blackburn, BikeBug and a small team called Search2Retain. The race played out in typical fashion, with a solid tempo being set from the start with Neil Robinson (Total Rush) again the instigator. As the wind picked up, breakaways tried to form, however with no cohesion in any of them, they were quickly swept up up the bunch. In the last ten minutes Stu Hill (StayTrue Giant) was joined by BikeBug but again, the move was bought back. 02 Racing, as they often do, timed their run almost to perfection with a leadout to unleash Club Champion David Loakes to the line, however he was caught by flying Frenchman Mathieu Delaroziere in the last hundred metres leaving Loakes to claim second. Search2Retain’s Alistair Donohoe taking out third. 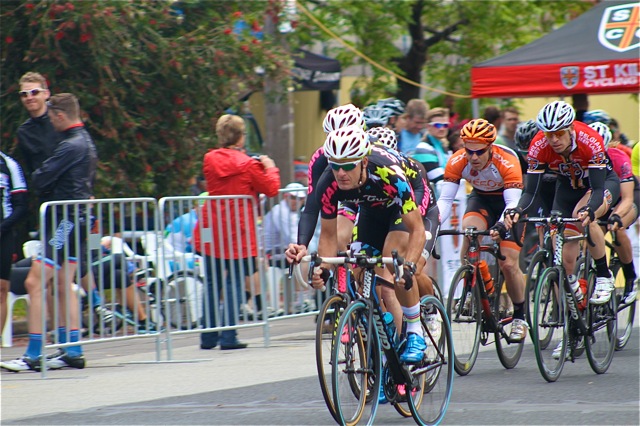 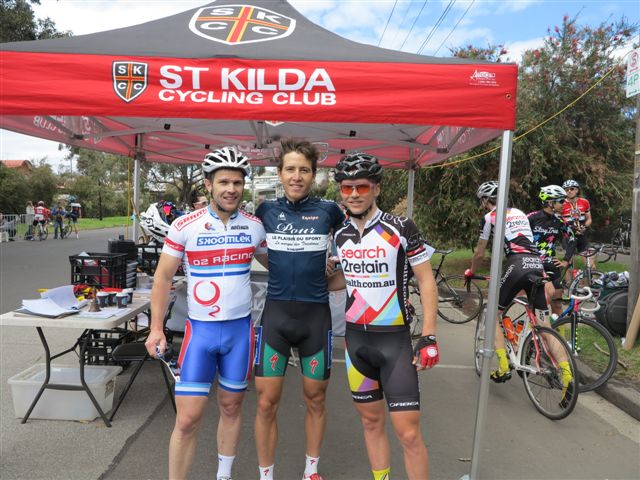 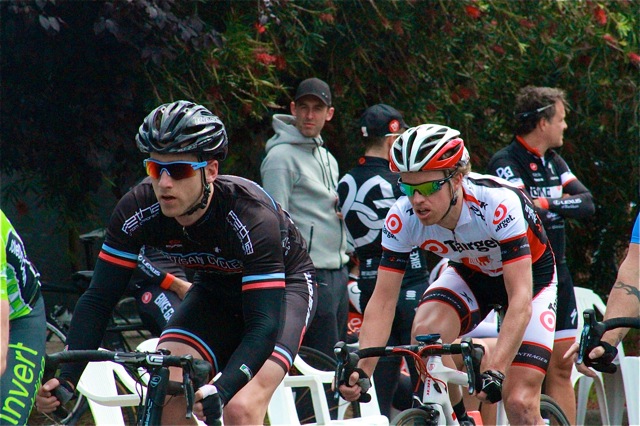