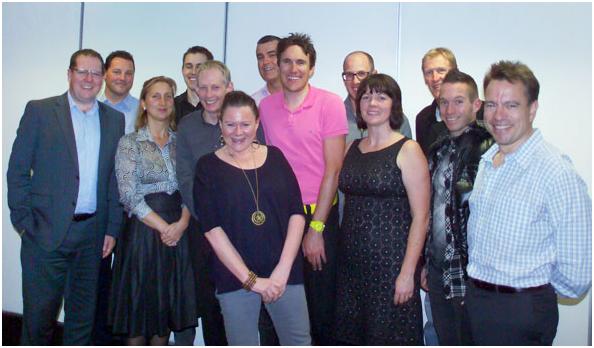 Last week SKCC held its AGM at the Urban in St Kilda where over 30 members came along to hear how the club travelled over the last 12 months and to appoint a new Committee to see out a new set of challenges for the next 12 months.

The club now has a new President and Treasurer after two extremely successful years that saw a partnership only rivalled by the golden years of Hawke and Keating; President Adrian Volk who gave a moving speech on the night, has stepped down and moved into the Race Directors role. Adrian has been replaced by Anthony Seipolt who has had two strong years as Treasurer and comes into the role with zest, excitement and enthusiasm. Anthony is a great operator and a passionate SKCC member.

Gaelene Snelling continues her role as Vice President and Women’s Director where she will continue to push for Women’s World Cycling domination. Her goal is to have 99% women members!

New to the Committee is Rick Horvat as Treasurer, Peter Hood in Sponsorship, Matt Pieterse as the new MTB Director with John Kelly and Alex Johnston as General Committee members.

The club is always looking for members to help in sub-committees and for their ideas and feedback.