SKCC at the Tour of Canberra 18 May 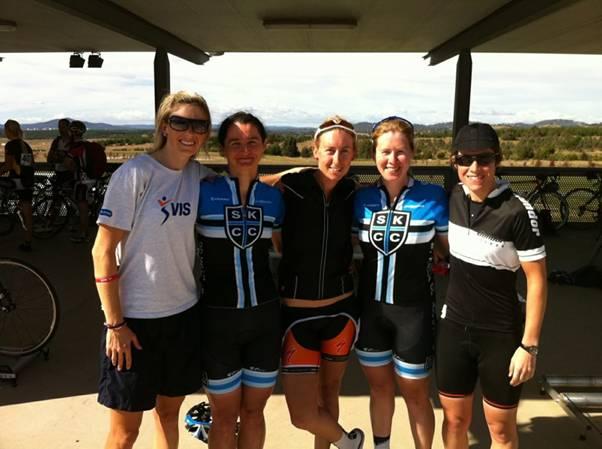 7 of SKCC’s Elite Women Riders headed up to Canberra the weekend before last to race in Round #2 of the National Road Series. The ‘Loop Canberra Tour’ consisted of 4 stages over 3 days, and was set to be a challenging race on Canberra’s Rough and Hilly Roads! All stages other than the TT had very generous time bonuses on offer for top 6 placings which would make the final GC come down to the wire.

Stage 1 was a Criterium around the purpose built Stromlo Crit Course. The superfast hot mix was a pleasure to ride on, and it was a fast tactical race with all teams wanting the win & time bonuses. Everything stayed together in the end and it came down to a bunch kick, with my Bundaberg Sugar team mate Loren Rowney taking the teams first NRS Stage Win + the Sprint Jersey! All SKCC girls survived in the bunch, with Jo Hogan (VIS) scoring a Top 10 result.

Stage 2 was 109kms over 2 loops of an out and back course going over Urriara Crossing and up to Brindibilla. Basically all up and down, and heading back out for the 2nd lap knowing what was ahead was rather hard! A bit of a mix up with Sprint and QOM signs made things difficult out on the road, however Jo managed to secure the QOM Jersey, and everyone made it through the tough race. Bundaberg Sugar tried to defend the Leaders jersey, however Loren got boxed in for the sprint and the Jersey moved to local Canberrian Miffy Galloway.

A couple of very short hours later and we were saddling back up and getting on the Rollers to warm up for Stage 3, a 20km TT. With extremely stiff legs, there was a lot of moaning going on, but everyone got on with the job at hand and did the best they could. Whilst some smoked the TT, others crept, and some used it for a recovery spin. Another local girl Beck Wiasak won by almost 1 minute, and put a good chunk of time in to the main GC Contenders who were all within a few seconds of each other leading in to the final stage. Bundy girl Loren was within striking distance, and Jo had moved in to 5th overall after her 3rd place in the TT! The final stage was going to be an interesting one.

Stage 4 was an 80km Out and Back, again over Urriara Crossing and out to a climb called ‘The Cotter’. I struggled to find my legs on the climbs as the GC girls mixed it up, and here’s where I’d like to give a big thank you to Jules and John – Team XOSIZE Actives support guys. I spent a fair bit of time going back and forth through the convoy today, and their encouragement helped a lot! In the end the decisive move happened at the top of Mt McDonald where Tasmanian Grace Sulzberger and the VIS’s Kendelle Hodges got away. Grace then attacked Kendelle on the 3 Sisters Climb and managed to solo away for the win. Loren took out the bunch sprint for 2nd, which secured her 5th overall. Jo took out the QOM and 6th on GC, XOSIZE’s Miranda and Bridget put in awesome performances and were 12th & 13th respectively. I came in 16th and Justyna 23rd, both of us happy to improve on last years race, and Tanya Matthewson (20th) & Hannah ‘Montana’ Vine (28th) completed their first ever NRS Tours!

Next stop on the Women’s NRS Calendar is back to Canberra in July, and from reports on previous years, we’ll be racing in below 0 temps which should be a – fun? – challenge!

If you’re like me and love to read race reports, check out the different perspectives here: