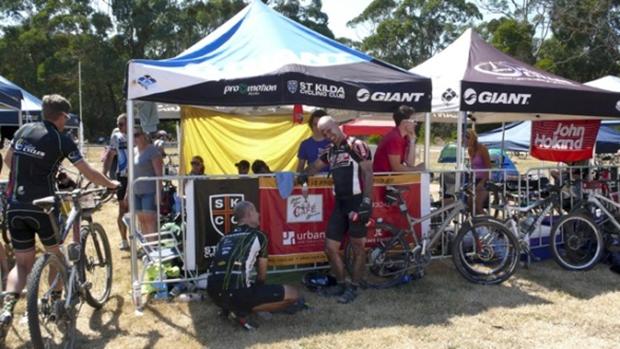 This is the big one. Arguably not the toughest race in the state but it is the one everyone wants to do, and a field of over 1600 riders, 800 for the 100km and 800 for the 50km (including many from interstate) confirms it. This year the 100km had a new course, starting and finishing at the inland town of Forrest rather than at sea level at Apollo Bay. Whilst the overall vertical gain is similar, the new course is a different animal. Previously the first 50km was dictated by a series of relentless forest track climbs – this year the technical trails began much sooner.

In years gone by this race had occasionally been plagued by extremely muddy conditions, especially on the original stretch deep in the Otway rainforest, but this year saw a very hot, humid and dusty day greet the riders. For those who entered the 100 race, at least 5 hours of struggle against nature awaited. The first 10km of the race is on bitumen, followed shortly after by a high speed dirt road section that quickly churned up a blizzard of blinding dust. By 20km in, an almost unrideable sandy climb had the bunch scattered like troops on the beaches at Normandy.

After a frenetic start, the race quickly turns into a lonely personal battle against the forest. Much of the singletrack at Forrest is mentally tough. Narrow trails are usually built to follow the easiest route through difficult terrain, but here several trails follow a difficult route through easy terrain, looping around trees and rocks, just for the fun of it. When you aren’t feeling great, this stuff plays with your head, and you have to keep winning the mental battle as much as the physical one. Sometimes you succeed, and sometimes you don’t.

Many who have raced this event have had the experience of feeling absolutely spent –frequently even before the half way mark! By 70km, the end can’t come soon enough, and by the final water point bottles have been refilled so many times most have lost count. The new course saves some of the best trail for last though, and with the kilometres slowly ticking down, flicking through the flowing berms and jumps in the fern tree gullies almost erases the pain.

Unlike a road racing, where the differences in ability between the pros and the rest of us can sometimes be cunningly reduced to just a few tantalising km/h, an off road event like this shows just how wide the chasm really is. The 100km race was won in under four and a half hours, with many in the field taking nearly double that long, and even hardened club racers finishing nearly an hour behind the pointy end.

Congratulations to all our members who gave either of the races a shot on the day. A huge thanks must go to club secretary Yvonne Dolphin for her help with the club tent, team lunch and taking the shots for this article. An ice cold recovery drink never looked so good! See you again next year Forrest!

CLUB RESULTS
Apologies if we missed anyone on this list!