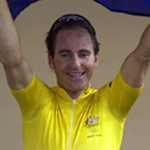 Lucky for the 6000 spectators who were trackside at Sydney’s Dunc Gray Velodrome on Thursday night, September 21, 2000 – for those glued to television screens around the nation, the excitement and sheer joy of a famous Australian sporting achievement in the making was almost as intense.

Scott McGrory and his partner Brett Aitken had moved to a near unassailable lead in the madison. They were ahead of 13 other nations in the final and just had to stay upright in the hurly burly chaos of the dying laps to collect Australia’s only cycling gold medal of the 2000 Olympics.

For Scott, who’d suffered the personal tragedy of losing an infant son only months earlier, it was vindication and payoff for years of hard work and competition at the highest level, including selection for the 1988 Seoul Olympics when he was18 years old. By 2000 he was one of the top madison riders in the world. But it was a close call – to ensure selection for Sydney at the world championships in 1999, Scott rode the last 50 laps on his own after a heavy fall brought down Aitken.

One of the most successful European six-day racers of his generation, Scott was an incredible all-rounder and went on to win track and road races for his professional teams, Team Jayco Caravans in Australia and then Gerolsteiner and Mapei on the European pro circuit. Scott was with the legendary Italian outfit when it folded prematurely in 2002 in the wake of Stefano Garzelli’s sanction for drug use.

Today, based in Bendigo, he is a track cycling coach for the Victorian Institute of Sport, a training consultant and reports on cycling for Fox Sports News – see him reporting from the Tour de France and follow him on Twitter