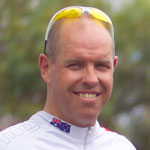 Being an average all-round sportsman through high school, it was only after becoming inspired by the television coverage of the 1988 Seoul Olympics and learning to ‘ride every day’ that Robert began a fascinating life journey through cycling.

Eventful career experiences ranged from winning dual 1991 Australian Road Championships to a World Masters Title in 2002; dizzy downers of bone-crushing crashes to an Order of Australia Medal; puncturing in an Olympic final in 1992 – and then surviving court battles to Paralympic Gold in 2004.

Since 1996 pro-cycling retirement, Robert has pursued a career vision in psychology for health and fitness, studying psychology and consulting in mental health. His model mentor role has evolved further as athlete-advisor for Sydney’s Olympic Games, Anti-Drug Campaign AOC speaker, Olympic sports commentator, and World Record tandem-pilot for Kieran Modra, Athens 2004. Currently, Rob directs the ever-popular Ridewiser cycling programs based in Melbourne, Australia, aiming to educate for cycling as a way of life and alleviation of community illness and obesity.