Well what a day Saturday 2nd February turned out to be

The day started out with twelve committed SKCC track riders rolling up to race event well before the racing started (well almost, Tim rocked up just as the race started), and not forgetting one committed coach Shane Kelly ensuring we were all ready and set-up for our races.
With rollers out, chairs marked, the teams commence their off track warm-up in preparation for the big day. This was the day that would say it all. Today would be the day that would show how well they have trained, how well they were prepared to take on some of the biggest and most dedicated track riding clubs in the state.

Clubs like Preston, Brunswick, Carnegie, Blackburn, Northcote, Hawthorn, Ballarat to name a few are big clubs of track. SKCC while a large club has only a small committed team of trackies. This year was its second year of attendance at this state level event, yet the team wasn’t intimidated by the pressure from the other clubs and remained focused throughout the year with base training leading into race training. Last year SKCC came home with an 80% win/medal rate from the races they entered. This was a very good result for the first year at track racing at this level and it certainly made the other clubs sit up a look at what a committed team can achieve in a short period of time.

2013 was seen to be a tough year. The big track clubs started training early in the season and were clocking some fast times. They had also entered large numbers of riders, one club entered almost 50riders.

First event was the team sprint. For the men the teams were made up of three men and they raced for three laps. For the ladies it was two riders for two laps. From the times recorded by each team they would then proceed to the finals. Fastest two would fight it out for gold and silver, next two fastest would ride off for bronze. From qualifying rounds, SKCC had all four sprint teams in the finals. Two of the teams were riding for gold and two for bronze. Results from these exhilarating races “on the edge of your seat stuff” was the two teams riding for bronze were both SKCC. Both SKCC team one and two had both qualified for the bronze ride off. How do you coach a team to win when you are coaching both teams? Results were :

– Ladies – silver, an amazing effort for the girls and to miss gold by the smallest of margins
– Men’s 135y+ – Gold – an amazing race, the team managed to ride away from two of the fastest teams Brunswick could assemble this year. Brunswick falling back, getting silver and bronze in this category. Bad luck Brunswick and well done guys this was truly an amazing effort and goes to show what can be achieved when the team is committed and everything just goes right on the day
– Men’s open – Team 1 bronze, a fantastic effort from a relative “new to track riders” team
– Men’s open – team 2, unfortunately just missed out on bronze and were pushed out of the medals by the smallest of margins by team one from SKCC 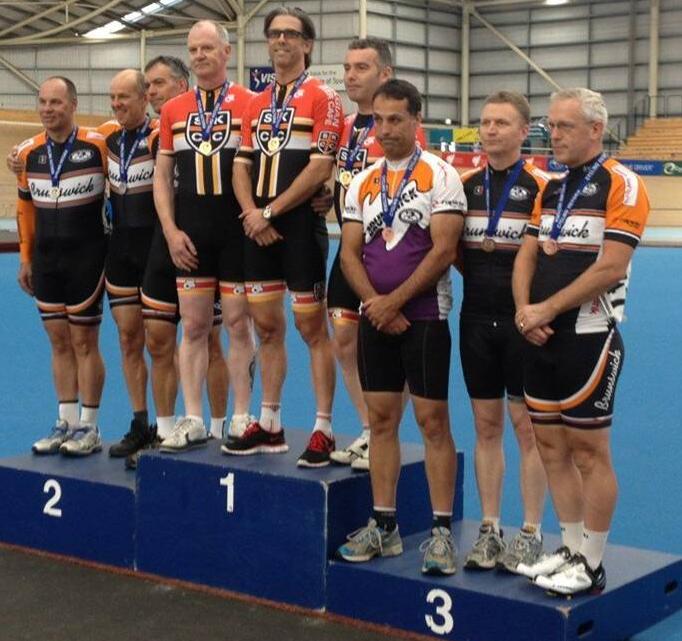 From the morning session we moved into the afternoon session for the pursuits. SKCC assembled three teams for these events. One from the ladies and two for the men. Once again all three teams qualified for the finals.

– Ladies – gold, the girls road away from the other team and actually caught them before the finish so the race was stopped and the gold went to SKCC. Congratulations ladies
– Men’s 108y+ – silver, great effort from a newly formed team
– Men’s open – 4th place, just missed out on bronze. An outstanding effort. 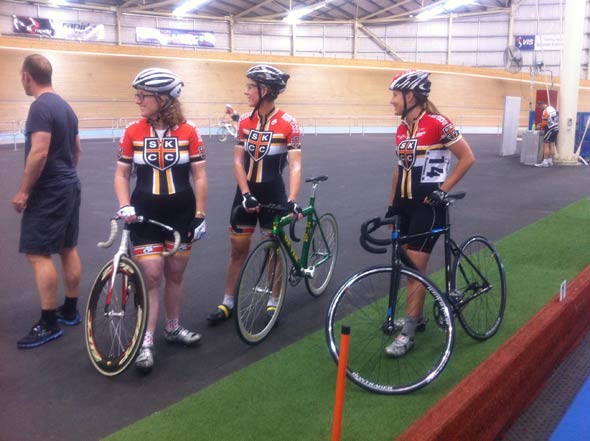 Summary
Seven teams, coming home with 2 x gold, 2 x silver, 1 x bronze and 2 x 4th places, and smiles on everyone faces. Your got to be proud of that result
On the way out after racing some CV Officials spoke to us and complimented all the team on their professionalism, team work, we stuck together in one area and didn’t move around, we were always punctual to the starts and extremely well organised. CV said they were proud of SKCC for their conduct at the event.

On the 16-17th CV is holding the Victorian Masters Track Championships. Anyone who falls into the masters category should enter to race this weekend. Once you enter please let Ray Box know what event you have entered so he can look-out for you during this weekend

On behalf of the SKCC Track team we would like to thank all our supporters, partners, parents, Carolyn (Luke’s mother for the photos), etc who have put up with us this past year with all our late night training. It’s all paid off and now we look forward to next year. Training for the 2014 titles will commence in a few months, the plan is to have a short break and then get back into it and be ready to bring home, GOLD, GOLD, GOLD

THE END No, just the beginning.