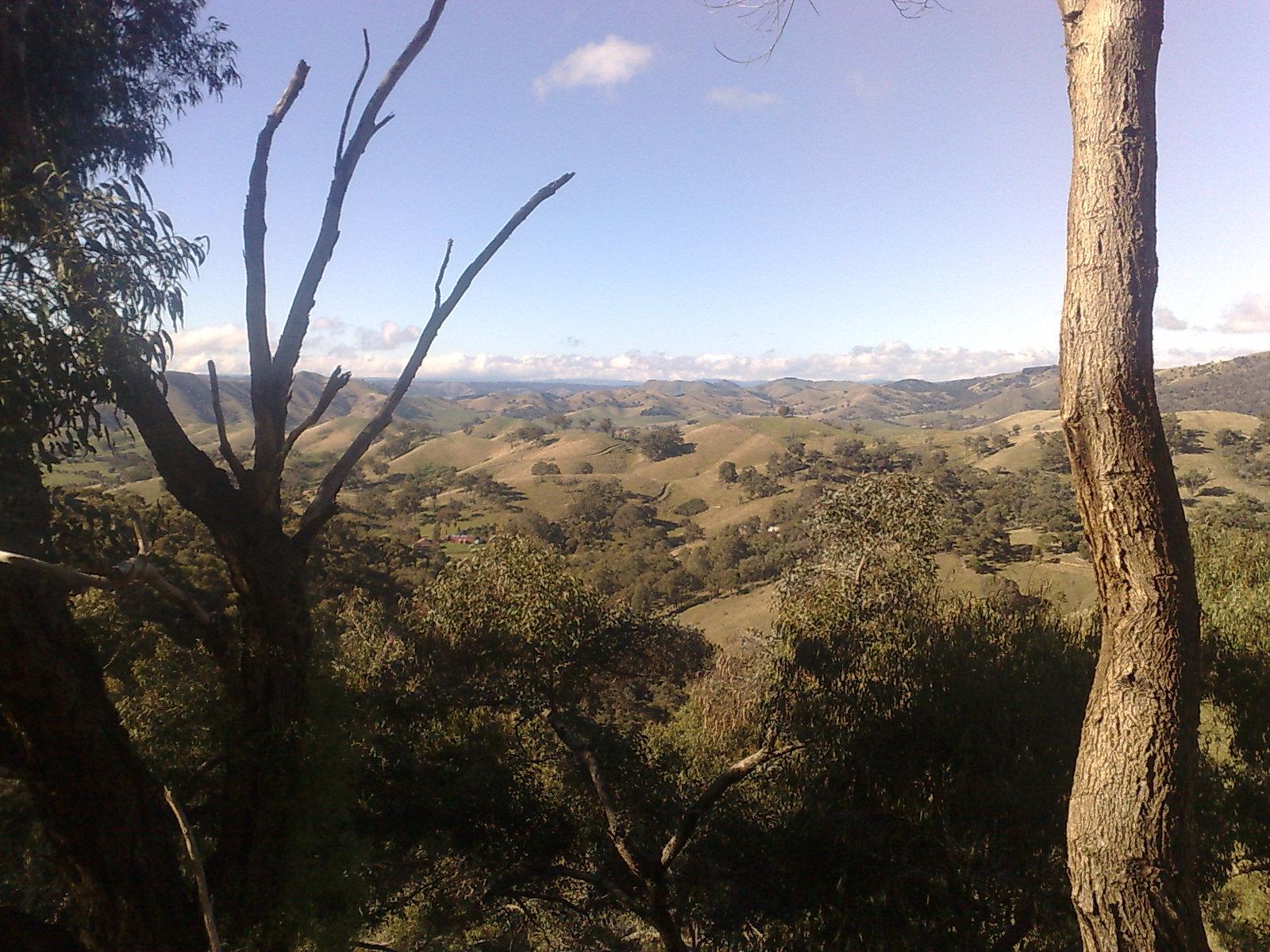 Picture: The view from the top of Murchison Gap – a devil in disguise

With a name like Preston Mountain Classic, you know you’re in for a serious day on the bike. As the 20-minute bunch gathered at the start line, Amma rallied the troops with the sound advice “Let’s stick together girls, take turns on the front and keep the 10 minute group away”. All the riders agreed and with the sound of the horn, off we went.

A blistering pace was set by Nonie Carr (Brunswick CC) and Nicole McNamara (Bendigo CC) which saw the group begin to blow apart. The initial group of 8 soon became 6 as the pace continued to rise with the ever present threat of the 10 minute bunch catching us. We soon settled into a rolling pace-line with all girls equally taking a pull at the front until Flowerdale and the arrival of Break O Day Road.

This gradual 10km climb looks innocent enough on paper but after sitting on 38+kph for the first 12 kilometres, the toll was beginning to show. The group of 6 blew apart, leaving only 3 riders at the top of the climb – Carolyn Fraser (Hawthorn CC), Jamie Leigh Edwards (Geelong CC) and Marlena Klaic (SKCC).  “How far back are the other girls” and “Can we afford to wait for them?” – Important questions in a handicap race where you’re balancing numbers with speed and climbing. After one last look back from Jamie Leigh and being unable to see the girls, it was decided we would push on and hopefully they would catch us on the descent.  So the three girls settled into a brisk pace taking rolling turns at the front, constantly wondering how many minutes we still had on the 10-minute group. Were they going to catch us? Had the scratch group and 10-minute group morphed into one enormously fast peloton that was going to mow us down any minute now? What we would have given for a race radio to know what was behind – it was truly a fox and hound race.  All we could do was continue working harder than we’ve ever worked before, ignore the lactic acid beginning to creep into the legs and convince ourselves that maybe, just maybe, we would be able to hold them off.

At the 50km mark, Carolyn looked behind and saw the follow car pulling over. Our hearts sank as we imagined the worst – we were about to be caught.  “Ride girls, ride faster” we yelled to each other as panic set in. We soon realised that the follow car had pulled over to allow non-bicycle traffic to pass. We breathed a collective sigh of relief and agreed we couldn’t afford to relax for even a second. Finally, at the 60km mark the follow vehicle reported on the megaphone that they had no reception so didn’t know how far back the other bunches were, but it was most likely we were safe.  What did that mean? Were they 5 minutes behind or 10 minutes? How many were in the bunch? How fast were they going? With names like Kendelle Hodges, Miranda Griffiths and Stephanie Ives breathing down your neck, there’s never a moment believing you might win the race. You’re just pumping your legs like an automaton, praying and hoping for a miracle.

At the 65km mark, Jamie asked about the finish. Was it a tough climb? How long and how steep was it? Having done a recce of the finish the week before, there was a moment of indecision – is it better to say “Ahhh, it’s nothing. Just a blip. You’ll be right.” Or, tell her that “It’s a 2km climb that looks like Baw Baw, feels like Everest and may result in haemorrhaging of the lungs.” Maybe somewhere in-between? “Well Jamie, it’s about 1.75km at 8% but it’s over before you know it. Watch out for the road camber but you’ll be right buddy.” After a moment of silence, Jamie ominously said “Well ladies, it’s been a pleasure riding with you and I’ll see you at the top”.  Feeling like we’d just come through 2 hours of hell together, the camaraderie was too strong to let anyone drop off. “Jamie, take the wheel and we’ll all get up together – first, second and third”.  And so it was. The three girls made their way up the last climb, pouring every last bit of energy into the final 2km. With calls from spectators “Don’t look back – go, go, go” and “You’re nearly there”, we started to believe it. We were going to make it. As I got out of the saddle, grimacing with pain, I was willing myself to pick up the pace. In my mind, I could hear my coach telling me to “dance on the pedals”. Coming around the last bend I saw it – the chequered flag. With a final burst, I was over the finish line and realised I’d done it. I’d won the Preston Mountain Classic and my first trophy ever.

Thanks to Michelle McMahon, Grace Phang, Coach Matt Rafferty and Mark Hutchison for braving the elements the week before the race to do a recce of the course.

Thanks to the SKCC women’s development squad, Lisa Byrne, the women’s dev squad co-ordinator and Gaelene Snelling, the Women’s Director. The support, camaraderie and training / racing opportunities are what makes SKCC the best club for women. 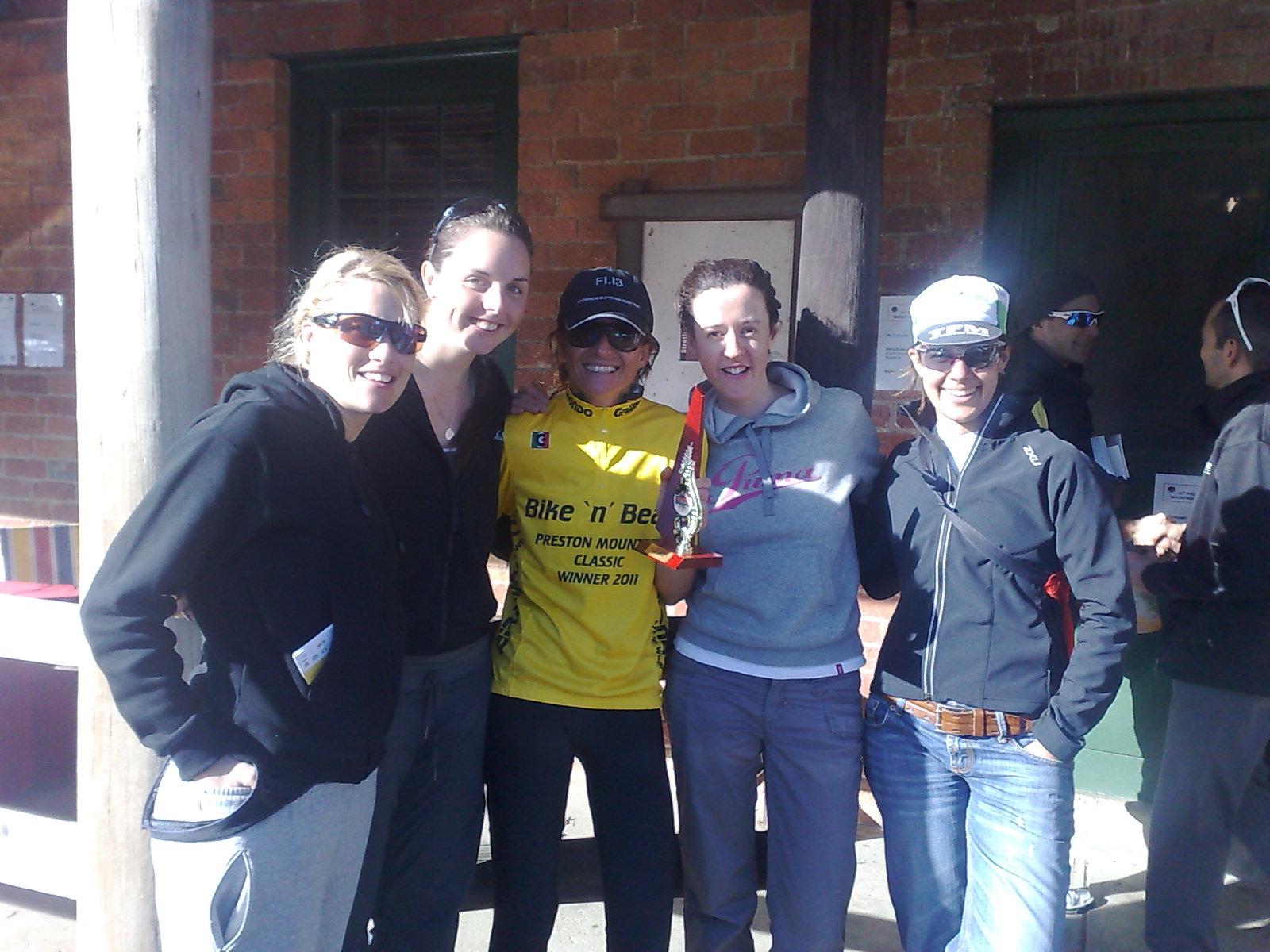