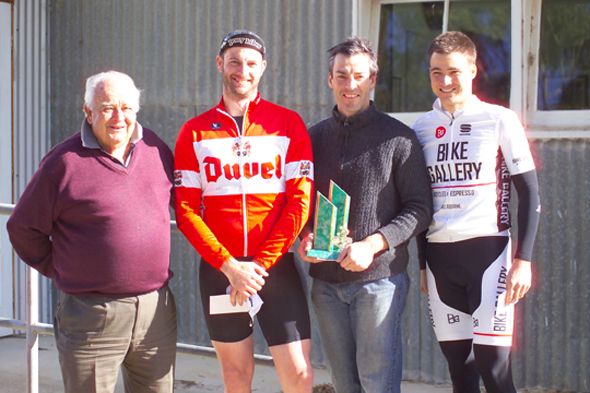 The John Sewell Handicap, held at Balliang was greeted with sunshine and a nice breeze that would work to the advantage of the stronger groups.

The handicap consisted of three laps of 25km circuit.  The circuit was pretty much flat apart from two short climbs, the second of which being about 500m @ 7%. The highlight of the course though was a 3km gravel road which was into a stiff northerly.  Some 70 riders were split into 8 groups with limit being given a 24 minute start on scratch.

The 6 minute group worked really strongly from the start, unfortunately a little too strongly, with 3 members of the group losing contact half way through the first lap. With just 6 riders remaining in the group, Ex-Machina member Michael Brown took charge providing plenty of “Stuey O’Grady like” leadership and encouragement to keep the group working extremely smoothly throughout the duration of the race. Michael provided a great example of why calm encouragement in handicaps works far better than angry threats.

Despite the limited numbers, the 6 minute group used a track turn strategy through the gravel road section to catch what looked like a merger of the 9, 12 and 15 minute groups consisting of 15+ riders by the end of second lap.

Our group caught a large bunch at the end of lap 2, though there were still more riders up the road. A number of riders from this group joined the effort to maintain the pace, including Michael Sparke and Robert Merkel among others. Although the level of cohesion deteriorated initially after the catch, we managed to keep things moving in the knowledge that Scratch could not be far behind.

The final time up the short climb successfully whittled our group down to about ten riders and we set about working better turns to increase our chances of staying ahead of Scratch, but was still two minutes down on the front of the race as we turned onto the gravel section for the last time.

Some big turns from Heath Jackson, Richard Longmire, Robert Merkell, Michael Brown and others (sorry you know who you are) had all but eroded the time gap by the end of the 3km of gravel and the two remaining limit riders were caught with about 4km to go. But to their credit, they contributed to the pace making straight away into the stiff northerly for the final few km before the turn.

After 75km of racing, a remaining group of about 10 riders sprinted for the line with Richard Longmire showing a great kick and going on to win ahead of Steve Duggan with Wes Cordingley third.

As it turned out, we held off Scratch by just metres as Ross Mueller taking out Fastest Time only seconds after our bunch crossed the line.

Thanks to Brunswick CC, the volunteers and our six minute group for a great day out.

As a side note, the Northern Combine is in desperate need of volunteers for the remainder of the season so if you enjoy road racing, please contribute as best you can.