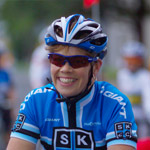 I’m a 40 something, mother of two who returned to recreational cycling for fitness and weight loss in 2006 and, despite the mountains between St Kilda and Black Rock, remembered how much I enjoyed it! My first race was late 2007 after participating in an SKCC Coffee Crit (now known as Latte Laps) session with Rob Crowe. Completely hooked!

Cycling Since:
Childhood (with a couple of long breaks in the middle), competitively since late 2007.
Hobbies off the Bike:
Hobbies? Who has time for them when you’re a working mum and cyclist? I do enjoy travel, cooking, team sports and textile crafts when I get the time though.
Favourite racing/cycling memory:
Standing on the start line of an SKCC Crit and realising the company I was keeping- past & present members of both Austalian & British National teams; champions,pro’s and the girls I have coffee with. I’m still amazed at finding myself riding with these stars !

Finishing Hell of the West without having to resort to walking up the hill!