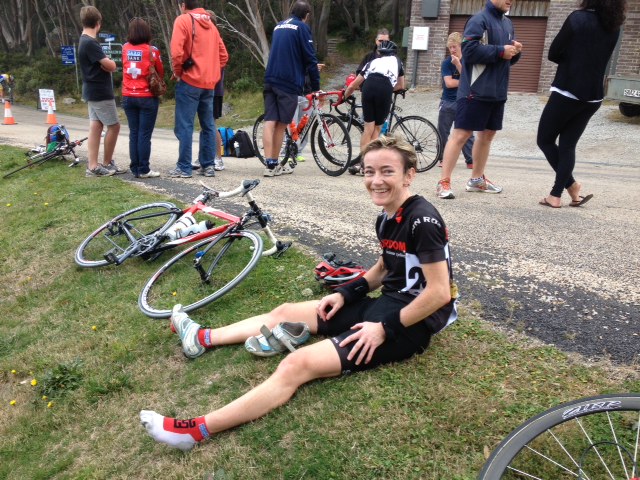 I didn’t plan on racing Baw Baw this year…..but a few drinks with fellow SKCC members at the club champs after party and a bit of gentle persuasion and I was entered !

Mt Baw Baw, like all mountains, deserves a cyclist’s utmost respect, but the fortunate truth is that I love to climb ! I’ve climbed Baw Baw twice in the last twelve months so I knew what I was in for. Fellow SKCC member and friend, Renee Nutbean agreed to be my support crew for the race and her encouragement and support proved invaluable.

Before I knew it, I was nervously lining up at the start of the Baw Baw Classic with a large group of elite women cyclists!!
Not used to racing, I was concerned about being dropped early and doing the whole thing by myself (as happened last year, after choking on my energy bar!).
The mood of the bunch seemed calm and ‘friendly’ and my fitness level allowed me to stay with them. Renee did a stellar job with a smooth exchange at the feeding zone but I struggled to get the bottles out of my musette (they make it look so easy on TV) and I lost ground to the bunch. But I do believe they ‘sat up’ and waited for me to rejoin?!!

As we reached Vesper Hill, the lead group took off but I let them go, choosing to keep my own rhythm, so as not to ‘pop’ before the final 6km.
As I started my ascent of the mountain I passed men and women who had gone before me and offered words of encouragement. The real battle is between you and the mountain. During the last 4km my quads and left foot began to cramp and I was relegated to climbing in the saddle, repeatedly counting to 100, just to concentrate on something else. I “sprinted” the last 500m to the finish to be 2nd placed C grade woman (in faster times than Women’s B grade and a faster time than I did last year).
Mt Baw Baw and I are at peace with each other once more…….until next time.

Thanks to SKCC’s support and recognition. Special thanks to Alison McCormack for convincing me I could do it, to Gaelene Snelling for her ‘good luck text’ the morning of the race, to Alison Raaymakers and Justyna Lubkowski for their encouragement on the day, and most of all to Renee Nutbean for her support throughout the entire day. I couldn’t have done it without her.

An epic day all round; creating memories that last a life time!