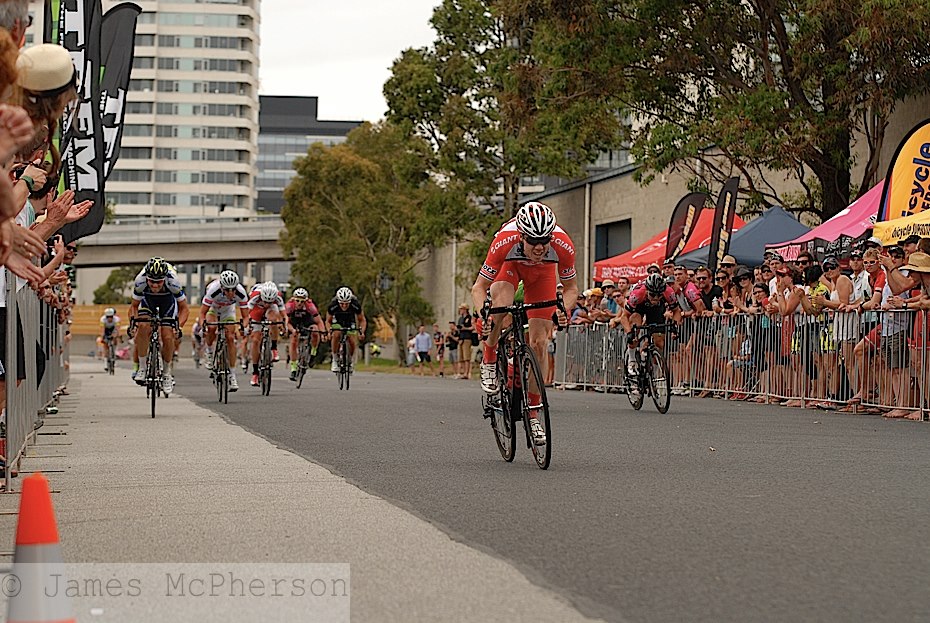 Not long after the sun rose last Sunday, White Street South Melbourne was a hive of activity as barricades and tents went up in tandem creating the back drop for a day of very hot action at the inaugural Melbourne Criterium Sprint Championships.

The full day program saw over 500 people participate in conditions that became increasingly testing as the day progressed. By the time the Elite Women hit the start line the temperature had crept into the high 30’s with a hot headwind down the back straight making for thirsty work.

The Elite Women’s race showcased the talents of the big names as the attacks kept coming lap after lap. Whilst Jenny McPherson and Nicole Whitburn traded blows for most of the sprint primes, others launched solo attacks in between, but nothing seemed to stick until a Bridie O’Donnell power play resulted in a a group of about 20 forming a break that many spectators thought would stay away however the chase bunch was not in a sit up kind of mood and several laps later the bunch was as one.

The final dash to the chequered flag saw Nicole Whitburn defiantly hang on for a narrow win from Chloe McConville who kept charging right to the line. Miranda Griffiths wasn’t too far behind with Kate Finegan and Jenny McPherson rounding out the top 5. 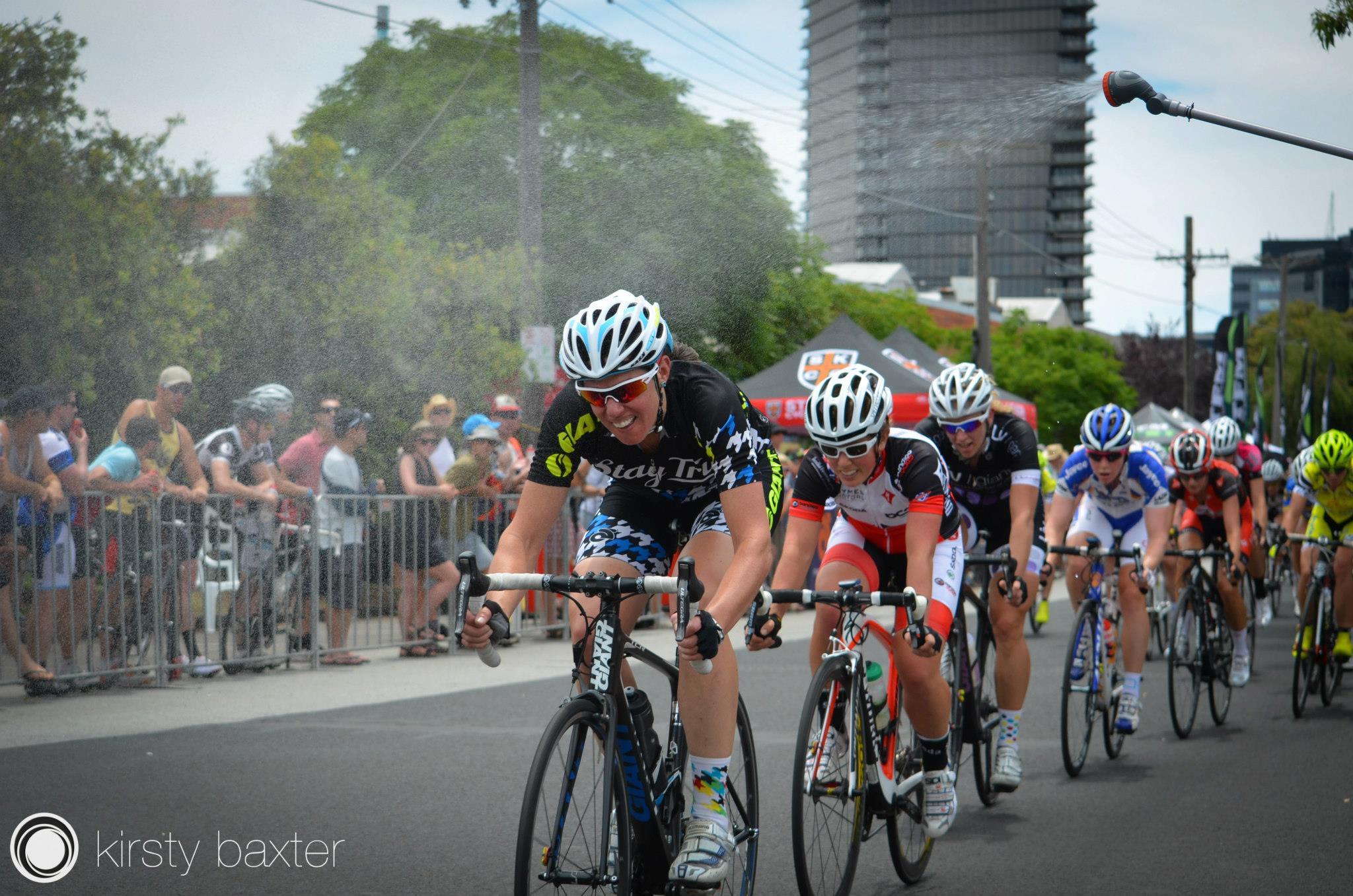 Nobody wanted to avoid getting wet as the temperature kept climbing

The Elite Men’s race started with several attacks consisting of several riders with each attempt being brought back to the bunch with what looked like a minimum of fuss, this was until Greg Henderson and Pat Lane found themselves not only isolated from the chasing pack, but steadily increasing the time gap.

Lap after lap the pair would roll down the main straight, and lap after lap Matt Keenan would announce that they were increasing their lead to the point where they were only 13 seconds shy of catching the rest of the field. In doing so, Hendy kept picking up sprint prime wins but eventually the the body language started to change as the sheer weight of their effort coupled with the heat began to take its toll. On the main straight, the crowd became more vocal as it became apparent that the bunch was hunting them down. Soon after, Hendy was all alone on the track and the cheering crowd knew it was only a matter of time before he would be swallowed up by the marauding pack. He and Pat had put on a great show, one that will not be forgotten for some time.

As the sign went up for 5 laps to go it became all about position and it was Drapac that proved to be the best drilled team setting up Tom Palmer for the line honors victory with Mitch Docker picking up second place, and Shannon Johnson just getting the better of Rico Rogers for third. Koen de Kort came in behind Rico for 5th spot. 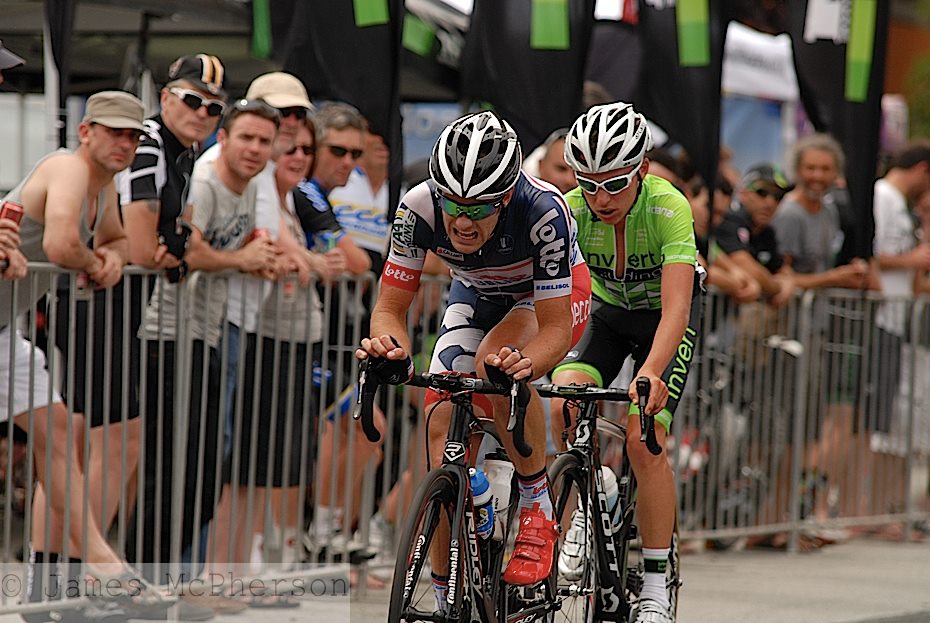 Greg Henderson and Pat Lane in the hurt box

And so concluded a huge day for the club.  A massive thanks must go out to all the members that volunteered their services for this event and in doing so ensured it could not only happen, but happen so successfully.

Full results for all the races are available here at Cycling Tips our event Media partner.