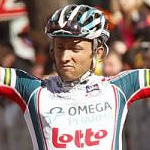 28 June, 2010: As he rolled alone across the line in Marina di Carrara on stage 6 of the 2010 Giro d’Italia, his arms spread in the victory salute, Matt Lloyd cemented his growing reputation as another brilliant Australian export to the world of European pro cycling. Check out Matthew’s site!

Already Matt is one of SKCC’s most illustrious members – yet at 28, the age when pure talent and hard experience begins to mature into a winning edge for the best riders, his future is beginning to look very exciting.  The best, surely, is yet to come.

The former national ice hockey champion (in 1996) made the switch to cycling 10 years ago and graduated in rapid succession through the Victorian Institute of Sport, the South Australia-AIS squad and – after getting noticed for making the podium in the 2006 Baby Giro d’Italia – into the ProTour ranks with Belgian team Silence-Lotto.

In his second season, he wore the Australian green and gold after winning the national road championships in January 2008.

Now the team has morphed into Omega Pharma-Lotto and Matt has established himself as someone good for the Classics. Yet his stage win and green climbing jersey at the 2010 Giro, and past exploits at the Tour and the Vuelta,suggest he’s one for the grand tours as well.

Every year in the off-season, Matt makes a star appearance on the sidelines during the club’s crit racing, and at club functions. Here’s hoping he bring more glory home to talk about from this year’s Tour de France.