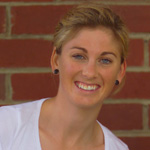 July 2010: A couple of years ago Joanne Hogan was still just riding her bicycle for fun – now she’s thinking of Olympic selection.

A former elite distance runner who represented Queensland in cross country – when her work as a nurse took her north between 2003 and 2006 –  Jo had plenty of cycling inspiration at home growing up in Melbourne.

Both parents have been competitive cyclists; her dad Gerard finishing among other races the 1996 Melbourne to Warrnambool and her mum Jennifer competing at state level. Not to forget brother Ashleigh, also a handy competitive bike rider.

But it was only in 2008 that Jo decided to get serious and approached Stuart McKenzie to coach her. Since then its been a fast track through the Total Rush and Prime Estate teams and into a Victorian Institute of Sport scholarship for 2010.

This year, the 28-year-old has hit a winning streak as training, experience and talent has started coming together. Jo has won the Tour of Canberra, the Creswick Handicap, The Teschner Grand Prix and is currently winning the National Road Cycling Series.

As a trained emergency nurse, Jo is now working part-time for Royal Melbourne’s aged-care so she can spend more time training and preparing for racing.

“I’ve got a competitive nature, I have a desire to set myself goals and achieve those goals,” she said.

Those goals now include winning the national championships in January, a professional contract in Europe and even national selection for the 2012 London Olympics.