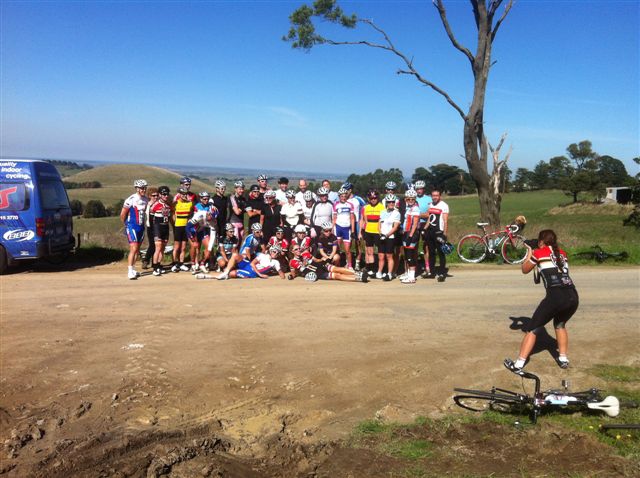 I will begin by saying, WOW, what an amazing experience!!!! 40 People, mostly strangers, but all with one thing in common, we love to ride!
This aging body of mine was about to take part in a new type of challenge. Somewhere I haven’t been before, let alone ridden and the longest ride prior to Inverloch for me was 103km and the highest climb ever being Yarra St along the Kew Boulevard. SO Bring it on!!

Now, when you decide to enter into an event and within the title there is a word that says “Challenger”, don’t take it lightly. The SKCC Ridewiser Inverloch Challenger Camp 2013 was certainly that.

On Friday 19th April after a 2hrs 15mins drive, we arrive at the RACV resort Inverloch, the weather outlook for the weekend looking good but for our introductory ride of 25km, that was looking grim, dark clouds in the distance and the wind was at its coast side best, windy, wild and the rain was imminent!!!

Before every ride, we would gather for a briefing about the ride an d plans for that day with Rob Crowe, Australian Champion and 2 time Olympian (I can still hear Rob saying “That’s right, did I mention I’m a 2 time Olympic Champion, but it’s not all about me!), and his team of Ridewiser instructors, oh and not to forget Leanne, our support van driver, our savour if we had a breakdown or basically needed a timeout off the bike.

It is now Saturday and 135km day is on the training program : hills, dirt and descents! My initial thoughts were, ok, worst case scenario I get in the van, no stress, but amazingly my legs were strong, no fatigue and I loved what I was feeling. “Oh, downhills, where have you been all my life. How much fun was this, scary at times but OMG so awesome”. At the end, 135km done, how chuffed was I. Now down to the ocean for a recovery dip with the boys in their speedos and a special mention to Reece for her displaying a sexy way to wear her lycra knicks!!!

So to Sunday, an 80km day, with a few TT’s thrown in (time trials that is) one with a partner and the other in a team of six and with some long rolling hills to get through as well!. No clouds, sunny, light winds, the perfect day! So we head along the coastal road into Wonthaggi to venture into more hills. It took some time to warm up but surprisingly the legs are unscathed from the day before, it must have been from that fresh ocean dip.

I think the locals were in shock to see so many people riding in lycra, they appeared to be fascinated and kept on watching us until we were out of sight. At one of our breaks in the town, Reece was stopped by a pensioner (wanted to have a friendly chat and curious what we were doing and who we were) on her motorised buggy before hitting the accelerator to continue onto her journey along the footpath. We had to laugh.
A highlight from our TT day (time trail day) were the cow bells, beautifully performed by Lizzy G and her assistant (sorry not sure who it was as we were flying by so fast) as we descended in pairs for about 7km down into a beautiful, green lush valley. The gorgeous colours of autumn had lined the streets of this tiny town called Kongwak.

It was then onto the long straight stretch of road at the base in the valley for our 10km team time trial back into Inverloch and home to the RACV resort.

I have to say, the rides were so professionally organised, with regular stops every so often to refuel, stretch and with great demonstrations and instructions on descending, cornering (at 0kmph) and climbing.

The beautiful inlet views of Inverloch, to the rolling hills of Poowong, to the smell of cow manure , the scenery was absolutely breathtaking, having a holiday house in Venus Bay, (the next township from Inverloch),I had never visited this part of the world before but i will definitely be back, bike and all.

Thank you to Rob, Leanne, Lizzy G, Andy McG, Matty M, (the Ridewiser instructor team) and their assistant leaders, Danny Cohen and Paul Adler (Velobourne Giant), to Kat Haggart for the lift to Inverloch and home again, and my 10km team TT crew, Kat, Reece, Karen, Megan, Lee and Lizzy G. It was fast, furious and soooo much fun…What a way to end the weekend!

To anyone that missed out this year, get on board for the Challenger Camp for 2014! One thing is for sure, I am already looking forward to booking my spot for next year!