What a week!
Established in 2009, the Honda Hybrid Women’s Tour runs as the support event to the Jayco Herald Sun Tour and, this year, was incorporated into the Women’s National Road Series.
Justyna and Alison from SKCC/Giant were joined by SKCC girls Marlena Klaic, Pip Read and new member Heidi Buntrock to form the SKCC team, under the administration of Team Manager Extraordinaire, Super G.

Day 1 saw us lining up for 7 laps of the flat and fast, 6 km, Lake Wendouree (Ballarat) circuit.  Being the first stage, we had anticipated some twitchiness in the bunch as riders settled in for the week of racing, and the first lap did not disappoint.  Unflagged street furniture  proved challenging and lead to a crash-marred stage.  SKCC team members successfully avoided the early crashes,  although the bunch was well split by then with only Heidi  remaining in the lead group .  Sitting  in an impressive position coming into the final kilometre she too had an unfortunate encounter, clipping a witches hat  and coming down.  Fortunately she was able to roll through and finish the stage.   Given the number of riders affected by crashes,  Commissaires made the decision to  give almost all riders bunch time.  Placings:  Sue Forsyth (Team SiS – NSW), Chloe McConville (VIS Womens Road Team), Loren Rowney (Bundaberg Sugar)
Day 2 we headed to the purpose built criterium circuit at Belmont Common (Geelong) for a fast & furious 40 laps of the winding 1 km circuit.  They went out hard from the gun, first lappings occurring after 6 laps, and more than ½ the bunch were pulled off the course by 20 laps. The remaining 20 riders  put on  a first class exhibition of criterium racing. Nearing the last 3 laps, many riders were brought down in a crash just over the start/finish line, including Nicole Whitburn and Melina Bernecker.  Both were able to continue after a lap out, Nicole missing the back of her knicks and Melina yet to learn that her frame was cracked.  The stage saw Loren ROWNEY (Bundaberg Sugar) cross the line in first place, followed by Sue FORSYTH (Team SiS – NSW) and Emma LAWSON (Pure Tasmania & Deloitte).
Day 3 brought a 13km out & back Team Time Trial on the rolling hills between Drysdale and Portarlington. The team was looking forward to working together in the Team Time Trial, and it was likely to be a stage free of drama.  We travelled to Drysdale to recce the course.  Pip, Heidi, Justyna and Marlena didn’t mind the somewhat lumpy course, Alison with her known well known preference for the other side of the hill had a somewhat different opinion of the course to the rest of the team.
We got going from a held start (notably Rochelle Gilmore on duty to set Justyna off the line). Pip dropped her chain on the start line, but was able to pedal it back on and catch the rest of the team.  Justyna, Heidi and Pip crossed the line together, stopping the clock at 22:26 putting us in 10th position for the stage, only 2:08 outside Suzuki/Trek’s winning time.  Marlena and Alison rolled in a minute or so behind.   2nd place to VIS (Kendelle Hodges, Lisa Jacobs, and Chloe McConville) and Team SASI (Sinead Noonan, Rebecca Werner and Jess Mundy) into 3rd. 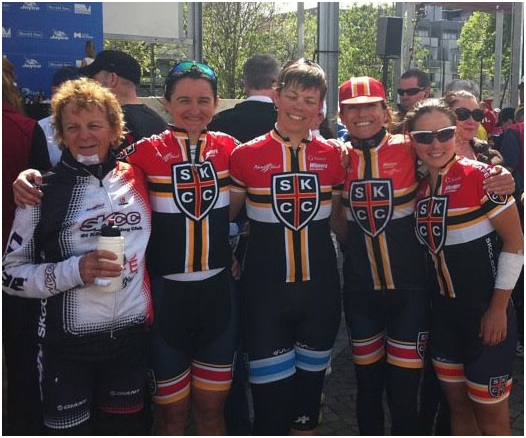 Day 4 we faced the Col d’Arthurs challenge.  Feeling very pro; sharing both start and finish lines with the boys racing JHST; racing with police escort & rolling road closures; friends stopped in cars along the route; the beep, beep, beep, vroom! as scout motor bikes raced past to attend to the next intersection; familiar faces amongst the neutral support; Thank you to all the SKCC supporters on the climb (SKCC girls, the Rapha encampment, Michael Ibrahim of Soul Kitchen at SRAM corner)…thank goodness no mankinis for our race!  Placings:  Lisa Jacobs (VIS), Natalia Boyarskaya (Russian National Team), Miranda Griffiths (XOSize).  Pip 30th, Justyna 38th, Heidi 39th, Marlena 53rd, Alison not last!! 🙂
Day 5 it was the carnival atmosphere of Lygon St and the fast hot dog circuit.  Stakes were high for this stage with only seconds separating the GC contenders.  The Tour was clearly taking a toll with 5 DNS at the start of the stage.  There was quite a crowd already gathered for the women’s race, with supporters lining the streets.   After a fast control lap, we got the gun and there was no taking it easy after 4 days of racing!  Splits occurred quickly, with the SKCC girls hanging on through every gut-wrenching hot-dog turn (3 per lap for 18 laps), sometimes the only thing standing between holding on and letting go was hearing your name called by the familiar voices on the barriers.   Marlena & Alison hung in there for as long as they could before being caught by race leaders at about lap 6 or 7 – oxygen deprivation during the race makes it difficult for the brain to keep track of some details.  It was a relief to get the bell for the final lap, Heidi in 38th place, Justyna in 39th place.  On returning to the team tent we found Pip bandaged but still smiling, she had come unstuck near one of the pedestrian crossing points.   Placings:  Kendelle Hodges (VIS), Venera Absaliyamova (Russian National Team), Loren Rowney (Bundaberg Sugar).
Overall: 1st  Loren Rowney (we’re confident she’s on her way to pro contract!!), 2nd Lisa Jacobs (immediately onto plane for a MTB race in Malaysia), 3rd Allison Rice.  Lisa also took out QOM, and Loren Rowney cleaned up U23 & sprint jerseys. The Russians too had a successful tour, taking home the team classification.
A pleasing 10th place for SKCC in the teams classification.  All succeeded, learned, grew & finished the tour.  Team camaraderie was in abundance,  learning about team classifications, point calculations, convoys, TTT starting order…there was exhaustion both physical & emotional.  Despite short races, the excitement, travelling and long days took their toll.
A special mention to Amy Bradley and her part in helping Loren Rowney win the Tour, and finishing 16th on GC herself – well done Amy.
A huge thanks to our Team Manager Gaelene, mwah!!!  Thanks to our friends and families for their support during this tour.  Looking forward to doing it all again next year.
Australian Masters Games – Jodie Batchelor
After the Masters National Road Championships Jodie headed over to Adelaide to compete in the XIII Australian Masters Games. Jodie was in form after coming off Nationals with 3 Silver medals, at the Games she competed in 4 events, 2 road and 2 track and won Gold in all events
The first race was the Time Trial held in Willunga, 17km over an undulating course and finishing at the top of the 3km climb. It was a cold and wet day, and just as Jodie started the rain bucketed down. Jodie decided that it good motivation to get the race over quicker and passed for 1 minute rider just outside the first km. Jodie recorded the second fastest women’s time of the day.

Jodie ready to start the TT. Photo: Cycling-Inform
The Road Race was held on the Time Trial course with WMAS3 only getting 2 laps – 34km. The pace was on from the start with Sam Boag from SA setting the pace. Sam was soon joined by Jodie and Fran Medina (Bendigo). Within 800 meters the 3 had a gap that they continued to build on. About half way up the climb on the first lap we were still together and Fran called out ‘roos!’. There were 4 kangaroos including a Joey on the road side of the fence rather unsure what us cyclists were up to. As one kangaroo took a bound towards the road we all left right, not sure who was more scared, anyway we safely passed but shortly after Sam took the front setting the pace and Fran just could not quite hold on. At the top of the climb Sam and Jodie were clear with Fran on her own chasing to stay in the medals, the rest of the bunch were working together as they were all club mates. Jodie and Sam continued to roll turns, almost at the top of the last climb Jodie kicked and held off Sam off to take the win. Sam second and Fran third.

Photo 1: Jodie and Sam lap 1. Photo 2: Jodie finishing the sprint for the win. Photos from Cycling-Inform
Next was the track events. Jodie rode her TCR Advance Giant road bike on the track, they were allowing this for just the individual timed events – 500m track TT and 2000m pursuit. First was the 500m TT where Jodie was the only one on a road bike in the group and was not able to start in the gate as the frame was too small. So with a hand held start Jodie did not get off too well but settled into the race and again took the win over Sheree from SA and Fran taking the bronze.
Jodie’s last event was the 2km pursuit with first round qualifying to see who got to ride for Gold/Silver and Bronze/4th. Jodie posted the fastest qualifying time and caught the order rider on the track in lap 3 of 12. In the final Jodie rode slightly faster and again caught her opponent towards the end of the distance which ended the race. Jodie 1st, Sheree  2nd and Fran 3rd. 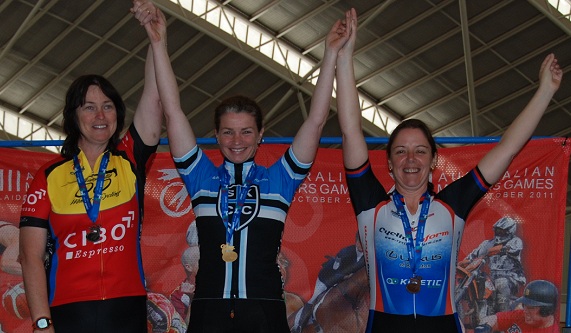