This week Hannah, Justyna and Jodie from the SKCC/Giant team contested the first in the four race series sponsored by BikeForce. With some big prize money and points for the series up for grabs, the fast girls were enticed to the start line with Jenny MacPherson, Nicole Whitburn and Bec Domange all there to contest.

With some fast sprinters in the race the aim was to make a break stick to avoid a bunch sprint. As soon as the scooter left the course after the first lap, the pace was on, set by Amy Bradley . Jodie was active at the start of the race getting in a few little breaks and creating a break but none of these were successful.

The race saw constant attacks throughout with everyone keen to have a go.  Hannah did a fair bit of work to cover some attacks by Jenny MacPherson and the hard working Bec Domange, who seemed to make it into every break there was.  Again these breaks were reeled back in after some hard work.

Carly Williams put in a number of big attacks throughout the race, never giving up but again none of them stuck. Towards the end of the race Justyna attacked with a final last attempt and her solo break lasted over 2 laps. But the girls were given the ‘3 laps to go’ board and the bunch pulled her back in as the speed increased ready for the final sprint. So a bunch sprint ended the day with Amma Griffiths giving Bec Domange a super lead out but Jenny was too strong taking the win over Nicole with Bec third. 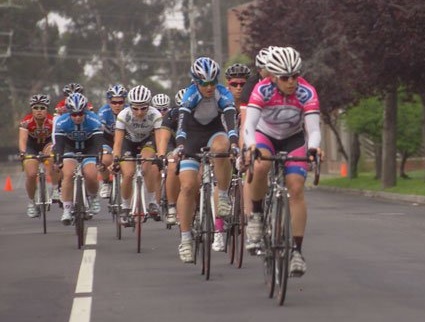 Carly on the front, the day’s most aggressive rider.