A Grade Men was a plethora of talent this week, with some international cyclists coming down to get their legs warmed up for the upcoming summer events. Shannon Johnson (CharterMason Drapac Development Team) has kindly taken the time to pen his race report for the A Grade Men below. The sprint Points were taken out by 02 Networks strongman Duncan Smith, with StayTrue Giants Stu Hill taking a solid second and Brian Darby taking third.
Shannon Johnson showed 3 crits in one weekend wasn’t a big deal (WHAAAT!?) by winning the overall, with 02 Networks Duncan Smith second and Baku Cycling Projects Rico Rogers third. 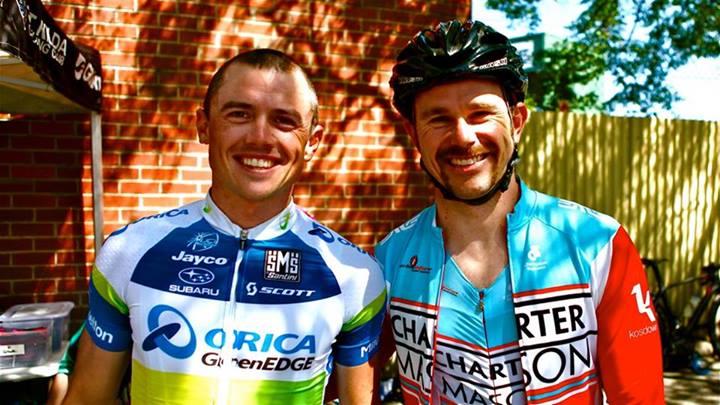 Gerro and SJ-
Shannon looks like he probably should go back to his motorbike days with that Movember mustache… solid.

I actually wasn’t expecting too much of my legs as I had done double crit races the day before, and they were quite a bit harder than I’d like leaving me feeling heavy and a bit on the tender side.
On top of that I almost didn’t make it to the races, not far from home I got a flat, having to make a quick return trip home to swap wheels. So much for an easy spin into town to try convince my legs to cooperate. Then add in a red light every few minutes making me later and later with each one, it was starting to look more and more like it was going to be a training ride/race just trying to hang in the pelo and not get spat out.
Finally I arrive get pinned up and take a five second breather with around five minutes to spare. Having a quick look around it was clear that it wasn’t going to be an easy day with the usual strong guys and fast finishers all out to offer their hurt in the sunshine. It was great to quickly catch up with one of Australia’s most humble and down to earth, and possibly most successful cyclist Gerro. A quick little story is that he and I use to race mini bikes together prior to his knee injury. I was fortunate and had great support and more often than not beat him, oh how the tables have turned. Maybe I should have done my knee too…Haha. But it’s always great to see him taking time out to give back to the sport and support the races that kicked off his career. Chapeau mate.

The race started with the usual attacks with nothing really sticking, it didn’t take long for a bit of fatigue to set in with a few riders dropping wheels so I thought my best chance to is try get in a break as I didn’t think I’d have the speed to beat Rico as my legs were lacking a bit of zap. I got in a group of four riders and we got a little gap, happy riding turns the gap grew until I think a few riders weren’t happy to have me in the move and it got shut down. Counter attack launched and the same thing again, break pulled back. I had one last attempt to get away with a hand full of riders but it was shut down. So it was inevitable that a bunch kick was on the cards, usually my preferred finish but I was thinking it wasn’t going to be my day. I honestly wasn’t feeling good.

With two laps to go there was a lot of movement in the pelo and I managed to get a great spot in behind Total Rush power monster Neil Robinson putting me around 7th or 8th wheel. On the start of the bell lap the pace was fast, helped by a tail wind down the back straight I knew the last two turns might be a chance for me to roll the dice. But O2s Duncan Smith whacked it, and with his speed I couldn’t afford to let him have a big gap so I too went full gas into the last turn. I managed to roll up alongside him on the exit and only had half a bullet left, I pulled the trigger bit into the stem and hoped to not see any wheels coming past. Sometimes you roll the dice and get lucky; this was one of those days. 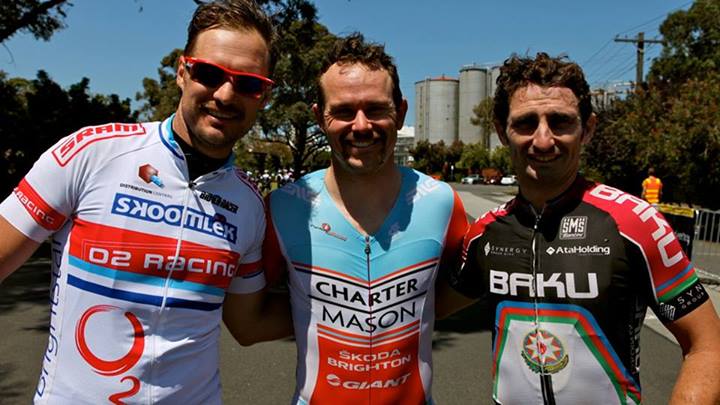 A Grade – Women put on a show, as usual, with all the hitters out and chasing victory. Unfortunately, and has been the case for a long time, Nicole Whitburn was not racing to make friends. “Black Caviar” despite losing to SKCC’s own J-MAC on the pinnacle of bike races “The Hot Lap” on The Bike Lane showed no mercy and won both the Sprint Points and the Race in great fashion. She is certainly looking strong for the upcoming Tour of Bright. Lisa Hanley (Hampton Cycles) came through for a strong second , with Penny Brown (Total Rush-Hyster) coming in third overall.
Lisa Hanley also took out second in the Points standings, a top effort. Jessica Lane from Cycles Galleria, came in third for the sprint points. 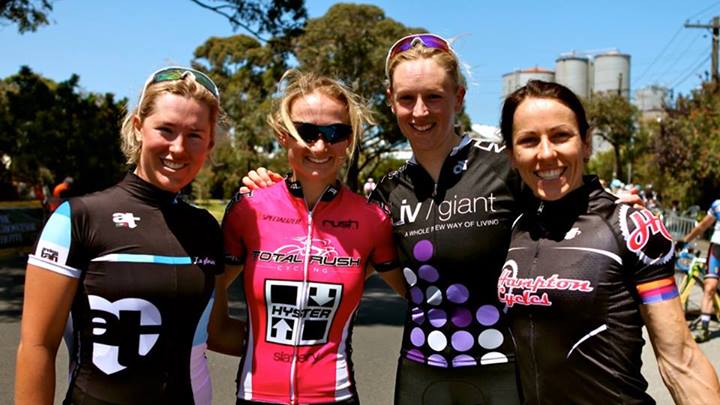 B Grade – Men, Dan Pickering (Artisan/BV Sport) made a strong case to join some of his teammates in A Grade, with a second win for the season in brilliant fashion. Ashley Peat and Erik Holt completed the podium with second and third respectively. Holt, following up from this podium a couple of week ago.
Pickering also came third in the Sprint Points competition just being edged out by Paul Jones and fastman Lynton Zawadzki (Canard).

Nicky St Clair was off to a flyer with her new team winning Women’s B Grade, putting her in contention for an A Grade berth in the near future. Annie Mollison took out another second to go with her result from October. No doubt Annie will grace that top step very soon!

C Grade Men put on a spectacle with a competitive race in both Sprint Points and final standings. Michael Popkiss just keeps showing his form, taking out the Sprint Points. However, that was as far as Michael would get, with Ryan Cotterell, annoyed at missing out on the Sprint Points win (he casually came second) giving the field a don’t argue and taking the win ahead of a very impressive Ee ler Wee and Gordon Kenneway taking third, backing up from his D Grade win a couple of weeks ago.

In Mens D Grade, Shule Going went BANG again and got another win for the season. I could be wrong but I believe that is 3 wins from three starts at SKCC, and the big New Zealander is heading on up, splitting up the Hydralyte team…. could this have devastating effects?! Broder Lackmann took out second place with Matthew McKimm rounding out the podium with a strong sprint for third.

E Grade had the early start to the day, but that didn’t stop them from getting stuck into the racing spirit with David Gardiner taking the win and Ian Russell taking second! 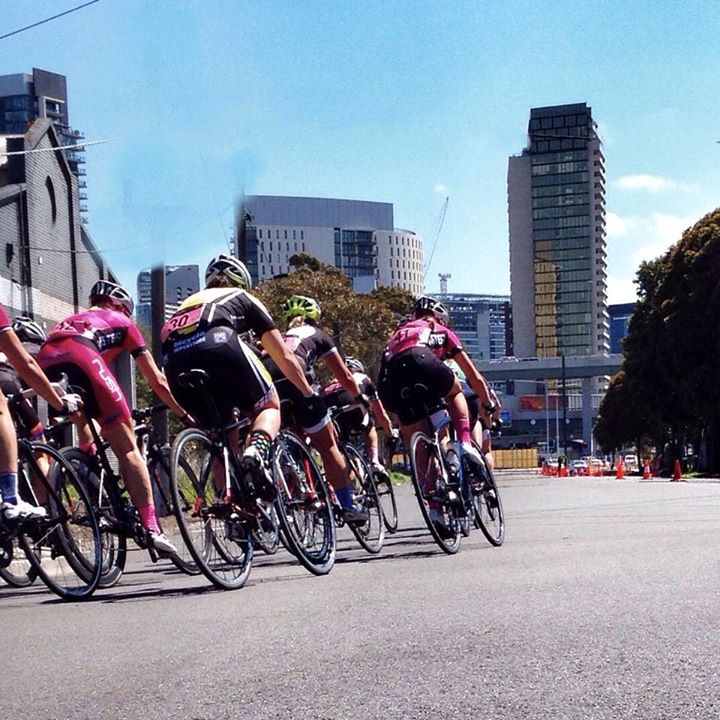 Great photo from the SKCC Pres of the girls HOOOOKING around corner 3. 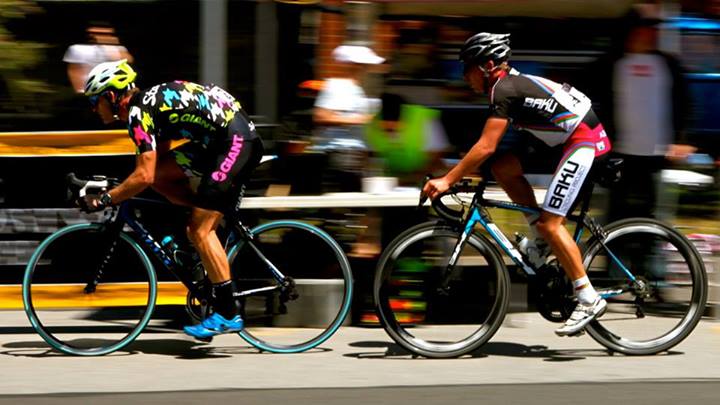 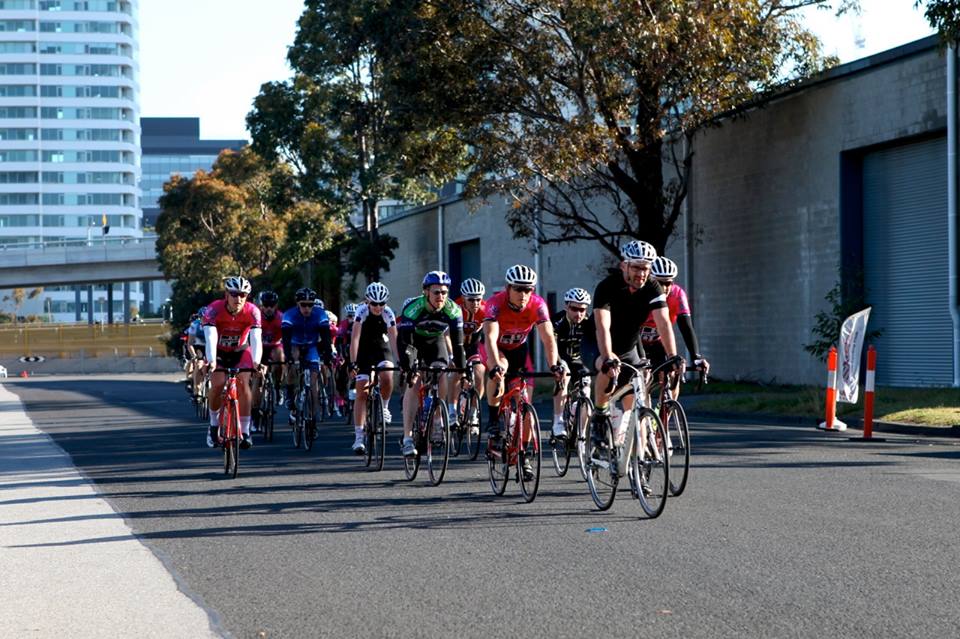 Total Rush (All the Pink!) have a massive presence in all grades down at SKCC. 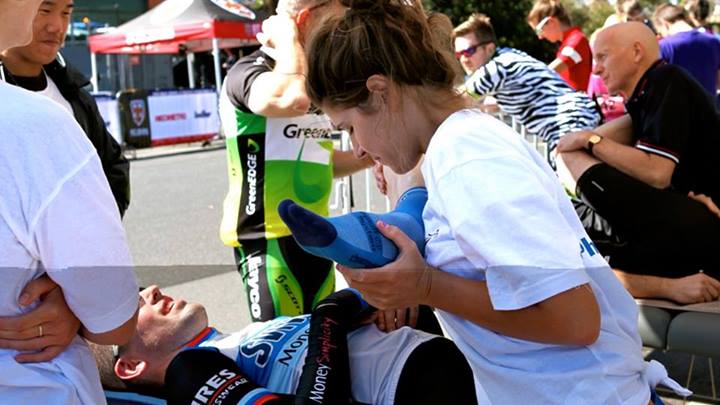 The team down at PhysioHealth are always around to help you get ready or relax after OR before a race!!! Contact them here!