With SKCC being the largest Cycling Club in Australia, it is bursting at the Chamois with remarkable people. We hope you enjoy getting to know these wonderful members that help make the club what it is today, by showcasing individuals that perhaps you have met, or would like to hear more about.

This week’s member interview is with Rob Crowe, interviewed by Martyn Taylor. 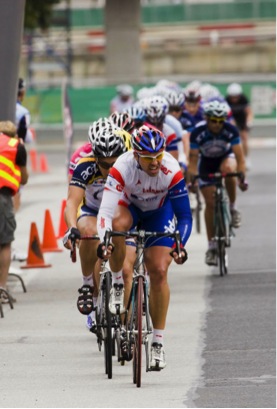 Rob Crowe in action at the SKCC Criterium races: On the front controlling the A-Grade Peloton

MT: Hi Rob, Tell us a bit about how you got into cycling and your career.

RC: The Seoul Olympics coverage in 1988 is where the inspiration came from.  There was not a lot of coverage in the media back then in cycling, not the same degree of technology as there is today, and recreational riding was not as big as it is today. You’d  pick up information and knowledge from reading magazines, a bit in the news; I learned pretty quickly that to be any good, I had to learn to ride nearly every day.

Out of High school or University, the average rider would train 3-4 days a week, but to be very good, I learnt I had to ride 6 days a week. I went from Club level to Olympic level in 2 years.

MT: What are your favourite accomplishments?

RC: I was lucky enough to race the Australian Road Championships on home turf when it was run in Gembrook.  Also getting the double by winning the TT Gold medal that year.

Not too many people know I won the Amateur Tour of Austria in 1991.There was no newspaper or media coverage of it.  I was in the Yellow Jersey for 5 days and received a government grant for winning the Tour.

Going to the Athens Olympics in 2004 and winning a gold medal was a highlight- being a pilot on a tandem bike with a blind rider.  Riding in the Barcelona1992 Olympics as part of the Team Time trial squad was another highlight where I had to ride with a flat tyre: that’s the glory and the adversity of cycling!

MT: How has Cycling changed?

RC: The knowledge and awareness of cycling, television coverage, the interest in the sport; growth used to be through the competition level, now it’s through recreational and “Challenge” riders.

On Beach road in Melbourne, in the ‘90’s and early 2000’s, bunches used to be small, and made up of registered racing cyclists of 6-12 riders normally.  Melbourne is now a Mecca for bunch rides in the world; it used to be Belgium when I was first riding, and bunches would get up to near 200.  Here, bunches aren’t considered large now unless they’re up around 80 riders.

MT: What’s your involvement with SKCC?

RC: I’ve been a member for 10 years.  I run Ridewiser which provides indoor and on-road/roadside training services.
I am the Road Training Advisor for the Club where there are 12 annually run training rides: There are also “one-on-one” written customized training schedules that riders can have prepared.
During the Criterium season, there are “Latte Laps”: 3 skills sessions to learn cornering bike handling and Crit racing skills.  They are held before the Crit racing and benefit not only the novice but even A Grade riders, improving their riding skills. 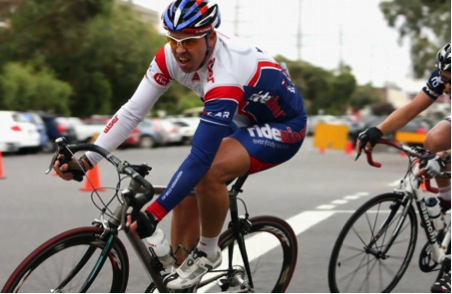 Latte Laps skills sessions will have you cornering like a Pro

MT:  What makes SKCC such a great club?

RC:  The growth in cycling has also transcended down to clubs as well, which includes- Road/Cx/ Track/Mountain bike.
SKCC have systematically tried to keep irons in the fire and develop them, particularly in the last 1/2 decade.

The Club started with a Sunday morning criterium race base which has then grown to cater for Challenge rider interests/ Recreational cyclists/Track/Mountain/Road Northern Combine.

The Club has a diverse riding Calendar: It’s no surprise to me that this club has won awards for innovation in developing new concepts and e.g. bringing me in to offer advice to the club within its networks: Riders can now access very knowledgeable people and advice by joining a club, where as when I started, as you earned your stripes- you may or may not have gained more access to good advice and people.  These resources can be accessed through the SKCC communications platforms: The Club web site/Social media and newsletter, including services Ridewiser offers.

MT:  What is one thing people wouldn’t know about you?

RC: The Ridewiser theme and motif: Looking at it, you would think it is about riding “wiser” in cycling.  I came from an Olympic Sports Career, then gained a tertiary qualification in counseling and practiced in that field, then went back into the cycling business with Ridewiser.

There was a counseling saying: “Learn to ride the journey of your life wisely”.
This was then applied at Ridewiser…. “Ridewiser is symbolic of using cycling as another way of life”, is probably the best way to put it. (So when you’re doing in-door training, or when you learn about skills on the road, there’s a safety and health element to the lesson rather than just getting fit). It’s a whole story. That’s where the motif of a balance man in a chain ring fits in- probably what people don’t realize.

MT: What’s your favourite food?
RC: There are a few people who will know this: dark coloured black and gold fruit cake. 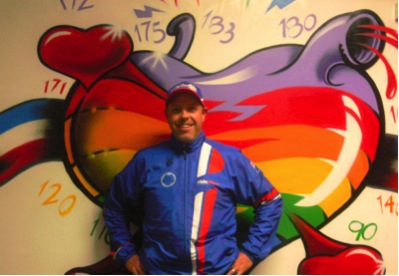