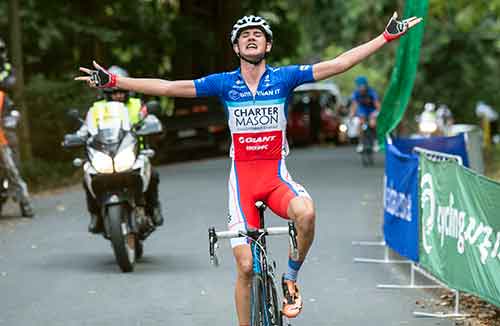 CharterMason Giant (powered by Brennan IT) have completed yet another successful tour in the Cycling Australia National Road Series.

This time the team moved just a relatively small distance from Toowoomba to the Battle on the Border, an event based around the Tweed Coast.

Stage One saw the riders take on the 123km from Tweed Heads to the Mt Warning car park. It’s a notorious and brutal finish with the final slopes rising to over 27 degrees. As one rider remarked “It’s a climb of truth, there’s no real lead out, no draft, just the climb…”

The team worked tirelessly to ensure that the bunch was pretty much all together as they hit the base of Mt Warning, with our youngest rider, 18 year old Keagan Girdlestone in the mix.

Keagan was surrounded by a sea of Avanti riders and decided to ride at the front and keep the pace up, and await their inevitable attacks.

The attacks never came. Keagan’s high tempo, followed by an audacious attack up the steepest part of the climb saw him put seasoned NRS champions in the shade as they one by one fell away, unable to match his pace. Keagan won Stage One by eight seconds, with places 2 through 5 filled by Avanti riders who he had seen off.

It was Keagan’s first ever NRS stage win, and placed the leader’s yellow jersey upon his shoulder.

Stage Two was always going to be a massive challenge. A long 177km stage with 3 King of the Mountains climbs and two sprint bonuses.

On paper this alone was a challenge. It was made even tougher when the CharterMason lads were caught up in a crash that brought four of our riders down including the leader Keagan Girdlestone. After team DS Damo Harris and mechanic Lewis Kerr arrived on scene they were able to get Keagan underway on a spare bike.

Unfortunately, Nic Katsonis- winner of the young riders’ jersey at last year’s Tour of Tasmania- was unable to continue as his injuries- a pretty solid face plant- ruled him out. Kegan was forced to stop shortly after when he discovered a buckle on his shoe had broken. An application of gaffa tape saw him back in the peloton.

After a calamitous start to the stage, limiting losses to just a few bonus sprints saw Keagan rest that evening with a narrow one second lead.

Stage Three started in Murwillumbah with 157km ahead. This was not to be our day, with fatigue and injury playing a role. Damo Harris would later describe the days as a “back foot, front foot, back foot repeat sort of day..”

Despite a valiant chase towards the end, Avanti’s Joe Cooper was able to get away and stay away and take the stage by 1:09 and with it the leader’s jersey.

Stage Four, the first of a double stage day, was a short individual time trial of just 9.93km leaving the Murwillumbah Showgrounds. After getting in the spirit of things at the Showgrounds, where they warmed up in a cattle shed, the lads went one by one with Ben Hill the top CMGRT finisher in 7th. Keagan Girdlestone lost a little time to Pat Bevin and was shuffled down to third on GC.

The Fifth and final stage saw a dominant and clinical performance from CharterMason Giant around the 1.37km crit course in Murwillumbah. An early break saw Raph Freinstein working away at the front and he was joined by Branxton Bulldog Josh Taylor and they remained in the break for much of the race.

With Avanti whipping up the pace, the break was eventually caught and a brief pause from the peloton inspired Ben Hill to launch an attack and another rider followed. They worked together for a few laps until Ben went solo for five raucous laps towards the end where he took a popular and noisy crowd win just in front of a raging peloton.

It was yet another inspiring win from the Canberra local Hill, who now has two NRS stage wins in 2015, both from never-say-die late solo attacks.

Team mate Josh Taylor showed the early break had not fatigued him too much, by rolling home third to cap off a very successful Battle on the Border.

Video coverage:
– The finish line (thanks to Oliver’s Racing)

Leigh Parsons, team owner:
It is amazing to have someone as passionate as Damo Harris running the team and I want to say “Mate you are an inspiration to me and everyone else around this team.” After Mt Warning I said “I hope Keagan one was hugging you saying thanks for all your hard work, as without you he most certainly would not have achieved the results he has to date…”

Speaking of Keagan, I was pinching myself when I realised that had beat all of the best riders in Australia to win his first NRS stage.

It was a massive thing for us to defend the jersey against the likes of Paddy Bevin and Joe Cooper. Their TT talents were always going to make things tough for us, but we went down fighting.

I was up there for the final stage with the team and I just love watching Ben Hill do what he does best; attacking late and holding off the entire Avanti train riding full gas for a sensational win. Amazing to hear the whole crowd screaming encouragement for the last two laps.”

Damo Harris, Directeur Sportif:
“I thought we would be close to the front pre race, but the way these blokes ride for each other- it’s unbelievable. They don’t care which one of them wins… as long as we win. Stage Two was such a character builder for the boys, we lost a rider to a crash where four of us went down and still managed to hang on to the leaders jersey by the slimmest margin.”

“Despite not winning the GC, we are happy with young rider and KOM jerseys and we’ve maintained our lead in the NRS points aggregate. Bring on the rest of the season!”

Stage One Winner Keagan Girdlestone, post stage win:
“I’m still shaking a bit! Wow…wow…wow!! Did this just happen? My first NRS win! Most amazing feeling in the world! Charter Mason Racing boys killed it to get me where I needed to be! Well and truly over the moon!”

Stage Five winner, Ben Hill:
“So happy to finish the first half of the Aussie season on the top step. Nice to add another win for CharterMason Giant Racing”

Battle on the Border 2015 results: