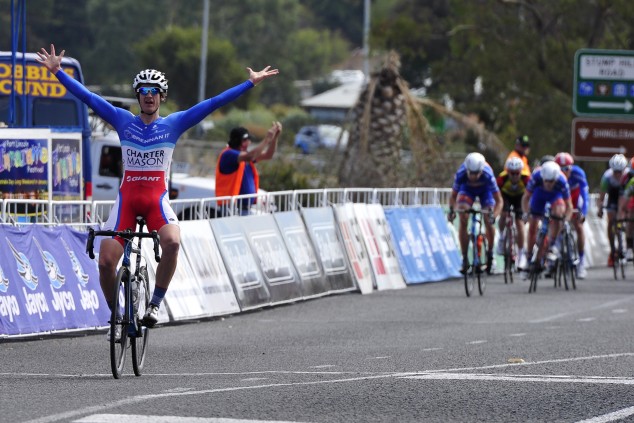 Charter Mason Giant Racing Team (powered by Brennan IT) have come away from the Tour of Adelaide satisfied after the close knit squad of Dan Fitter, Ryan MacAnally, Raph Freienstein, Nic Katsonis, Scott Bowden, Sam Crome and Ben Hill took a stage win and the event sprint jersey. With sponsor Kieser Training in attendance via their Director Tim Dettmann who took on physio duties, the boys were physically and mentally well primed and keen to continue their great early season form coming off the Tour of Perth where the team won three of the four stages.While Avanti Racing took the majority of wins in Adelaide, CMGRT showed that they will be the other team to beat in 2015 and will not be over-awed or intimidated by the presence of long time dominant squads. The ever aggressive form of Ben Hill was rewarded with a brave and determined solo win on stage three. Ben joined the team late in 2014 and has shown a willingness to attack and attack “beyond reason…” His on-bike talent and relentlessly positive attitude has not just added a powerhouse rider to the team, but his sense of humour and team spirit helps the boys work as one and have fun to boot. Ben Hill: “It felt good to throw my hands in the air again! I just want to say thanks to CharterMason Giant Racing team for backing me. Winning stage three was great and on today’s final stage Raph (Freienstein) and I gave it everything. While we were caught with a lap to go, it was good for the team to go for the win, and it was nice to be rewarded with the Most Aggressive jersey and Sprint jersey after what was another hard day in the break…” For team DS, Damo Harris, the team is shaping up nicely after two NRS rounds. “In 2014 it took us half the year to secure four stage wins. This year we’ve won four of the eight stages on offer. It’s important to be out of the gate aggressively and make other teams chase. We’ll just keep doing what we’re doing! I’m really happy with our team dynamic and the way the boys want to ride together and for each other.”  “As far as the final stage was concerned, they gave it everything; they were in every move and that guy Ben Hill..! He was off the charts and it was a just reward for him to get Sprint Jersey on the last stage and the Most Aggressive.”

The NRS now moves to the east coast with the Tour of Toowoomba kicking off in Queensland on the 21st through 24th May followed closely by the Battle on the Border 29th- 31st May.