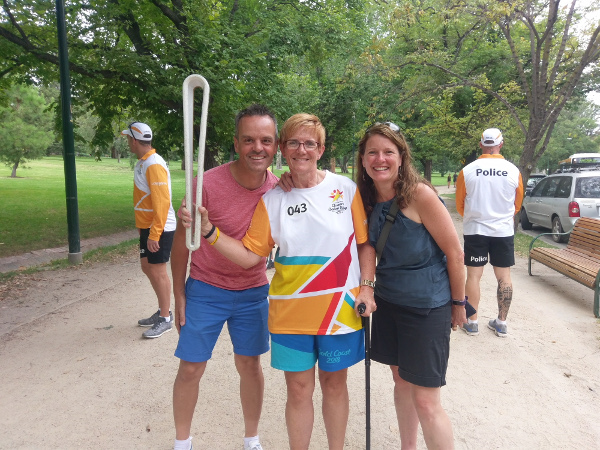 A few months ago I received a letter telling me that I was to be one of the 3800 people chosen to carry the Queen’s Baton in the relay that was going around Australia on a 70 day trip to the opening of the Commonwealth Games on the Gold Coast. I felt very honoured to be offered a chance to do this. To me carrying the Baton in this relay made me feel that I was part of a legacy for these games in Australia as a symbol of tying the community together. There are people of every gender, religion and colour regardless of their ability or disability taking part.

So on Saturday the 9th of February I along with 9 others met at the Observatory at the Botanical Gardens. From there we were put on a bus to Government house (even though it was 100m away!), through very tight security and met with the Governor Linda Dessau and her husband. We were then taken to our points along the route where we would receive the Baton. My position was as the 3rd person to carry it from Government house. First was Nicole Livingston (Olympic swimmer), who passed it on to Dylan Alcott (Paralympic tennis/basketballer) and then on to me. As I walked my whole 250m it was an awesome feeling, with 8 police officers surrounding me and a chaperone at least I was going to be safe on The Tan!! It was also great to have Lisa Byrne and Ernie Arriagada there and we were even able to sneak in a few pictures! I then passed it on to a young woman named Tess, an actress who is now based in the USA but was once on Home and Away!
We then all walked down to the Melbourne Uni Boat Shed along the Yarra where Kim Brennan (nee Crow – Olympic rower) took the Baton for a trip down the Yarra!

Everyone involved was so excited to be a part of it and the logistics to the entire event was incredible. It will definitely be something that I will remember the rest of my life! My classification and my event may not be part of the actual games but at least I was able to take part in even just a small way!