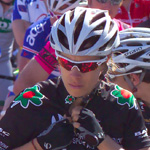 Having put aside her career as a doctor for the moment to give it everything she can as an elite athlete, Bridie O’Donnell has a clear goal: “to win a world championship,” she says. At the same time, the last 12 months as a neo-pro for the Italian Team Valdarno in her mid-30s has given her new understanding, “that the process is as important as the result”. Bridie has cycling’s highest peaks in sight, but she knows, “you don’t win bike races all that often”.

Not that she wouldn’t know what winning was like, looking at her palmares – as an amateur and professional cyclist, and before that first as a rower and then an ironman triathlete.

Having been inspired by the rowing discipline at the Sydney Olympics, Bridie moved from her home town Brisbane to seek out coaching support in Melbourne. She won plenty of events as a sculler but, “five years of cold mornings and calloused hands later I returned to a sport that had always been easier than the others – cycling.”

In 2006, after good placings in the Hawaii, Austrian and Busselton Ironman events, she used the outstanding strength of her bike leg to apply for the AIS National Talent ID and Development program, designed to find elite time trial cyclists. “It meant spending the next 12 months specialising my training with the goal of Olympic selection in mind.” That was then that Bridie met retired elite road cyclist and coach Donna Rae-Szalinski, “and we began a dynamic and terrific coach/athlete relationship”.

World class results followed. But in the 2008/2009 season Bridie was splitting her time between working as a doctor – five years as an intensive care registrar at the Cabrini and then at the Avenue – and as an elite cyclist.

“I wasn’t fully committed to either profession,” she said. She wasn’t getting any younger either. It was time, she decided, to give cycling everything she could. “I feel compelled to be the best I can, and the time was right to become a professional cyclist”.

Now based near Varese, in northern Italy, Bridie is still able to train with girls from the AIS squad based nearby, between flying around Europe to compete for Team Valdarno. Inbetween, she’s on a steep learning curve to learn Italian, as the only English-speaker in the team. Next time you see her doing off-season training on Beach Road she will have competed in some of Europe’s toughest cycling events, including the female Giro d’Italia. And just maybe she will have done something special at the 2010 World Championships down the road in Geelong.

More about Bridie O’Donnell at: www.bridie.com.au