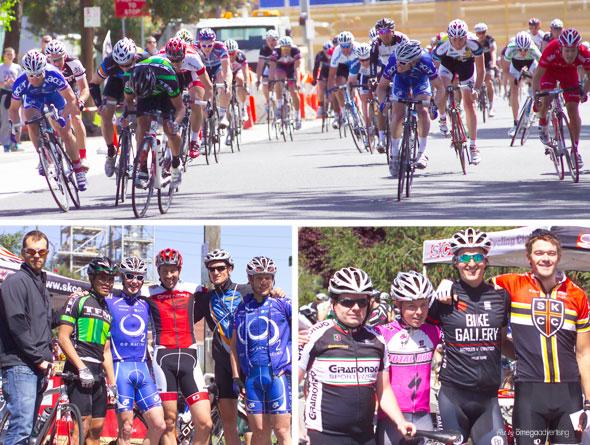 The clouds opened up to see blue skies and bright sunshine for Race 1 of the “Total Rush/SBR” 4 Race Point series. With $3,500 prize money up for grabs, courtesy of Total Rush/SBR, this is a fiercely contested series. The circuit was in great condition, mild temperatures and a slight southerly breeze greeted the riders for Race 1. A total of 222 riders came out to play on this magnificent October’s day.

“A” Grade had the biggest of any of the fields today with 76 riders and all the familiar local teams were out to race. The attacks were coming quick and fast with multiple riders all trying to break clear. No breaks really threatened with the best break getting out to about 25 seconds.

Nick Bensley (Nacional) was into everything, as too was the form man and Week 1 winner Aaron Salisbury (Bike Now). But they were always shadowed by O2 Networks David Loakes and Chris Tymms with Will Tehan (Total Rush), fresh from overseas and looking super fit. After 60 minutes of leg sapping attacks it was all going to come down to a bunch sprint with  the famous blue O2 Networks train making their way to the front to lead out their new superstar signing and former Australian Road Champion Allan Iacuone.

It was a fantastic sprint finish with Aaron Salisbury’s (Bike Now) lead out man Chris “Snakeareli” Salisbury getting caught up in traffic (Chris was riding Michael Rogers bike from the Worlds). It was a super-fast finish with Mond Harrif (TFM), fresh from the Commonwealth Games, eating the sprint up for first, with dynamic David Loakes and Chris Tymms (both O2 Networks) second and third respectively, closely followed by powerhouse Aaron Salisbury (Bike Now) with Mikkeli Godfree 5th.

“B” Grade saw 46 riders go around at good speed with an early blistering attack by Adam Kliska (Becoz) but with only Tom Hallam able to follow and no one to provide the support needed the break was brought back in after 10 minutes. Then came another monster attack this time from Brent Woodlock looking a million dollars in the new SKCC kit and Michael Samris (Degani). This break looked very dangerous but as 3 laps to go approached, the break, after much effort was reeled back in.

A sprint finish looked certain despite multiple attacks with some really strong work by Brad Speller to bring back break after break. On the bell lap the field exploded and the fast got faster with Jay Heather (Hampton Cycles) looking good as he crossed a mini gap only to have his front wheel clipped and his race finish. The final sprint was won by Matthew Hol followed closely by workhorse Brent Woodlock with Leigh Parson finishing 3rd.

“C” Grade saw 38 riders have a fairly one sided race with a break of 5 riders away and never really challenged. Matt Gordon (Bike Force) tried in vain to get help from other riders in bridging the gap across. In the end Chris Smith (new SKCC member hailing from the UK) won by 3 bike lengths in a powerful display ahead of Simon Frost and Glen Wright.

“D” Grade had 37 riders fight to the end with Max Proven outsprinting a fast finishing Sam Madden and Jacob Sumson.

“E” Grade saw 14 riders experience the fun and thrills of racing under the watchful guidance of the “Total Rush” marshals but in the end it was Ewen Stuart over Mark Reynolds.

The Women saw a field of a dozen riders thrash it out. With the late arrival of Jenny McPherson (Prime Estate) a sigh came across the girls as they lined up to race. Jenny paying $1.01 for the win at Sportsbet was the hot favourite and she did not disappoint, easily taking out the sprint ahead of Jane McInnes.  In B Grade it was down to a 3 horse race with Lindy Hayward looking strong as she outsprinted Briony Cole and a fast finishing Susan Cox.

Thanks to all the marshals and reg desk volunteers today (Race Director Simon Meagher, Assistant RD Shauna Tupper, Marshals Jessie Fergie, Steven Waite, Joshua Parisotto and Lee Turner, Julie, Fiona & Marita on the desk) and to everyone who came down and supported this great day. A special mention to Total Rush/SBR for again supporting this great series. Points are allocated to the top 5 finishers in each grade. We’ll have the points tally up on the website shortly with a link from this article.