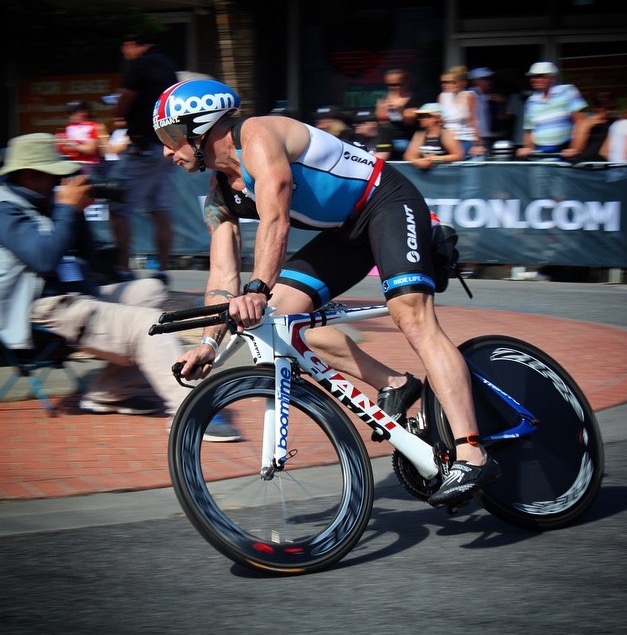 Definitions of “extreme” include “exceeding the ordinary, usual, or expected.”  For most people… the idea of completing a triathlon fits that definition.  However for a certain, shall we say “unique” (crazy) demographic in our midst, such a task is nothing more than a challenge that needs to be conquered.  And, for an even smaller group, that challenge must be taken to the limits of the human body.  For them, there is the Ironman Triathlon.

The Ironman Triathlon takes three events: 3.8km Swim, 180km Bike, 42.2km Run.  Just one of these events on its own might be too much for most mortals, but then again… the Ironman triathlete is no mere mortal.

Adrian Booth aka Boothy or @clikt is quite well known for his Paris end of cycling commitment to fashion #sockdoping #swooshlife #tickaddict and mad, keen family love.  On the flip side there is a supremely competitive athlete that backs it all with sheer determination.  Last Sunday completed Melbourne Ironman- Asia Pacific Championships.in just under 11 hours and 30 mins…with a broken ankle to keep him company.  Boothy casually dropped 50 push ups at the Giant Ironman party 1km from the finish, knocked back a beer and continued on his merry way to complete his second full Ironman to add to the many half and Olympic Distance events.

Every story has a beginning.

When did you start competing in triathlons and why?

Early 2000’s to break the monotony of full time riding. It just seemed really hard and I found that challenge attractive. I knew many Triathletes who would joke about how riding fast was all well and good, but could I run after doing it…… and then the Ego dropped in. After my first I was hooked. I got so “owned” and I took a genuine appreciation to the Sport.

Do you feel that there is a particular personality that is drawn to the Ironman Triathlon? If so, how does your personality fit that mould?

I think that Triathlon is so broadly appealing that it attracts many, rather than a particular personality. There are those that curiosity sparks an interest and then there’s the work colleague that wants to understand just what the hell their peer does at 5am and then again after the work day is done. Triathlon, much like Cycling, (my greatest passion) is a great leveller- CEO to Trades people, we all combine to form a community. I would say this is the Sport’s greatest appeal- the coming together, the combined fight, the shared experience.

Similar to Cycling- under pressure you find out a lot about yourself, you show an immense insight into who you are. This is to yourself and your peers. That is incredibly magnetic, its attractive and like with Cycling- why thousands of people do it globally.

My personality …. Well I consider the Sport a bike ride that starts with a perverse warm up (Swim) and ends with a soul crushing warm down (Run) and I understand many people agree J Truth be told I fit in because for many it’s the personal challenge of answering a simple question: Can I? This touches on self-belief, reaching out for support, being open to suggestions….. I think for a lot of people, whether it be professionally or personally, the desire to answer a question like that will automatically create community, a sense of belonging. I really like that and hence why I do it- repeatedly.

What is the story behind the 50 push ups?

A good friend of mine Craig broke his back in 2 places. He was a 1 in 4 chance of being paralysed but through good care and some good fortune he was operated on and starts to heal.

He says that as an indication of him being back on track, being able to defeat this immense challenge that he wants to do just 1 push up……just the one so he can affirm in himself that “he’s back”

So I say, well from the day you did it, to the day of the race I’ll give you 1 for each day. I love this Man, he gives a lot, he’s a larrikin, he contributes heavily to his community…….. so this was a small demonstration of that. Just a small kind of…. We care for you, keep healing……. That’s about that really. People like that stuff, they like knowing people give a dam. So I gave him a big hug in my lycra 1-zee (so Manly) and got on with doing them. 50, man it was tough at kilometre 41…..

Many people only think about the physical aspect of competing in an extreme event, but don’t take into account the mental part. Which is the more difficult aspect of preparing for the competition, the physical or the mental? Or are they equal in difficulty?

The physical component is hugely significant- you are asking a lot of your body. That said, the mind drives the body. Every session is a decision. A decision to get as good a job done with the time you have. It is also about being OK with what you can do. Sure, you hear about others that have 4-5 hours to do sessions, but not everyone has that.

Finding a level of content that lines up with your expectations of yourself, which can sometimes be misaligned is a real challenge. Again it’s a process of learning about yourself. If I was to say which aspect, for me, is more significant- definitely the mental. I just feel everything flows from each one decision you make. Ultimately you have to choose to be in the environment you are in………so once youre there, what do you do about that?

Time to do a self critique: Which part of a triathlon is your strongest? Your weakest? Why?

My bike. Like I said, I’m a rider that does Triathlon and Cycling is my preferred Sport. I have spent most of my life on a bike and will continue to do so until the end of it- Simply…. I love it. My weakest….well I’d say Swimming but I do not swim, I splash and somehow move forward.

Preparation is obviously the key to success.  What is your training regimen?

Swimming- I go to GESAC and cut a few laps. 1 session with a squad and then another by myself replicating the squad protocols. I do circuit training that recruits Swimming type muscles but it is time thing.

Riding- I use a Wahoo trainer a lot. Just the way my life is, thats what I do to derive the results I want. This also helps reinforce the mental aspect of training because for anyone that’s ridden a trainer before, YOU KNOW that feeling…… yep…..that Trainer ONLY feeling.

Running. I genuinely love running. This is not to imply I am good at it but I love the honesty of it. Unlike on a bike if you seek to rest you can coast…with Running that means you’ve stopped, so it is a constant effort. It is also a time I spend with my 2 kids (9 and 3) I run with the Pram (strength training J)  while my 9 year old rides. We can go for a while and the longest I have done with them is 38 km. My Daughter often states this with great pride that she rode that far. What a champ!!

I love circuit training. I boxed when I was younger a fair bit and essentially use those plans. Kettle Bells are a thing now and I use those

For professional triathletes, competing is a job, so finding time to train isn’t as difficult as it is for the amateur triathlete with other priorities. How do you fit training into raising a family, a career, etc.?

That is an easy one. Finding this time is easy because I truly want to do it- like it is “in” me to get it done. When things are of this level of significance then very simply it happens. It might be early, like 4am or it happens through lunch. Sessions happen later in the night when I have put my guys to bed. It just gets down to wanting a certain level of result and being prepared to do the things necessary to achieve that.

Are there times when you think “Why am I doing this?”

Often. Like at 4am, at Lunch or after I put my guys to bed. J

Give us a bit of insight as to what goes on inside your head during a competition and how you keep yourself going.

Ironman is a long day that goes quick, if that makes any sense. I just try to remember that. So I try to “store” that ego and just let the day play out. Arm over Arm, foot over foot- simple Mantra’s that allow a calm to stay with you. There is so much going on. Thousands of other athletes, some super stressed, other not. Some manic while others planned… I like to be in the relaxed state as the result of being planned. It is a long day- I always hold to the idea if I have something left with 10k on the run to go- then I’ll go for it-

How long do you see yourself competing?

As long as I can- there were athletes out on the weekend that were 75+, how inspiring………

What’s your advice for someone just starting?

Find people that you trust and be open to their suggestions. There is so much Café banter about everything and it can be truly overwhelming. Be comfortable with your decisions and if it works out, great, and if not you are wiser for it.

Enjoy what it is you are doing and continue to enjoy learning about yourself, the sport has a real habit of showing you who you are and just how amazing you, and people, can be.