5 Questions with Michael Leung 29 May 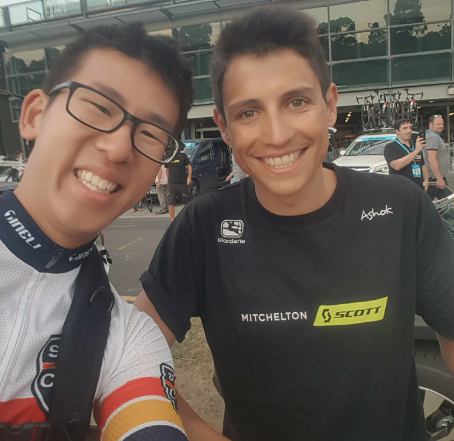 Michael first dipped his toes into road cycling when he bought a road bike second-hand early last year. Before that, he was commuting to uni on an old touring bike. Michael joined SKCC in June 2017 because he wanted to meet more people in cycling, and St Kilda was a club that offered beginner bunch rides to teach riding techniques and etiquette. After his first Friday ride, he fell instantly in love with the sport; and hardly a day passes where he’s not on a ride, or making plans for one.

The thing Michael loves about SKCC more than the cycling is the people – SKCC members are the kindest and most supportive people Michael has ever met in his life and he’s lost track of the generosity he’s experienced. Recently he was asked if he wanted to train as a ride leader, to help lead a ride or two if needed; and he was more than happy to help out and give back. Michael says the club can think of him as a ride leader in training – being relatively new to the sport and the club, he definitely has a lot more to learn!

Nowadays, you will find Michael on most morning rides as ‘that guy who lives Northside but still rides all the way down to the cafe each morning (it’s worth it!). Outside of cycling, Michael is completing a full-time internship with IBM Australia, and will finish his bachelor’s degree in actuarial studies and statistics in 2019. Michael has signed up for the 300km Around the Bay, and is committed to keeping up the kilometres over winter. He’s also interested in trying out track cycling sometime (John Wyatt??). The 640km Lake Taupo Enduro challenge does tickle his fancy to…keep us posted on that Michael!!! SKCC learnt a little more about Michael…