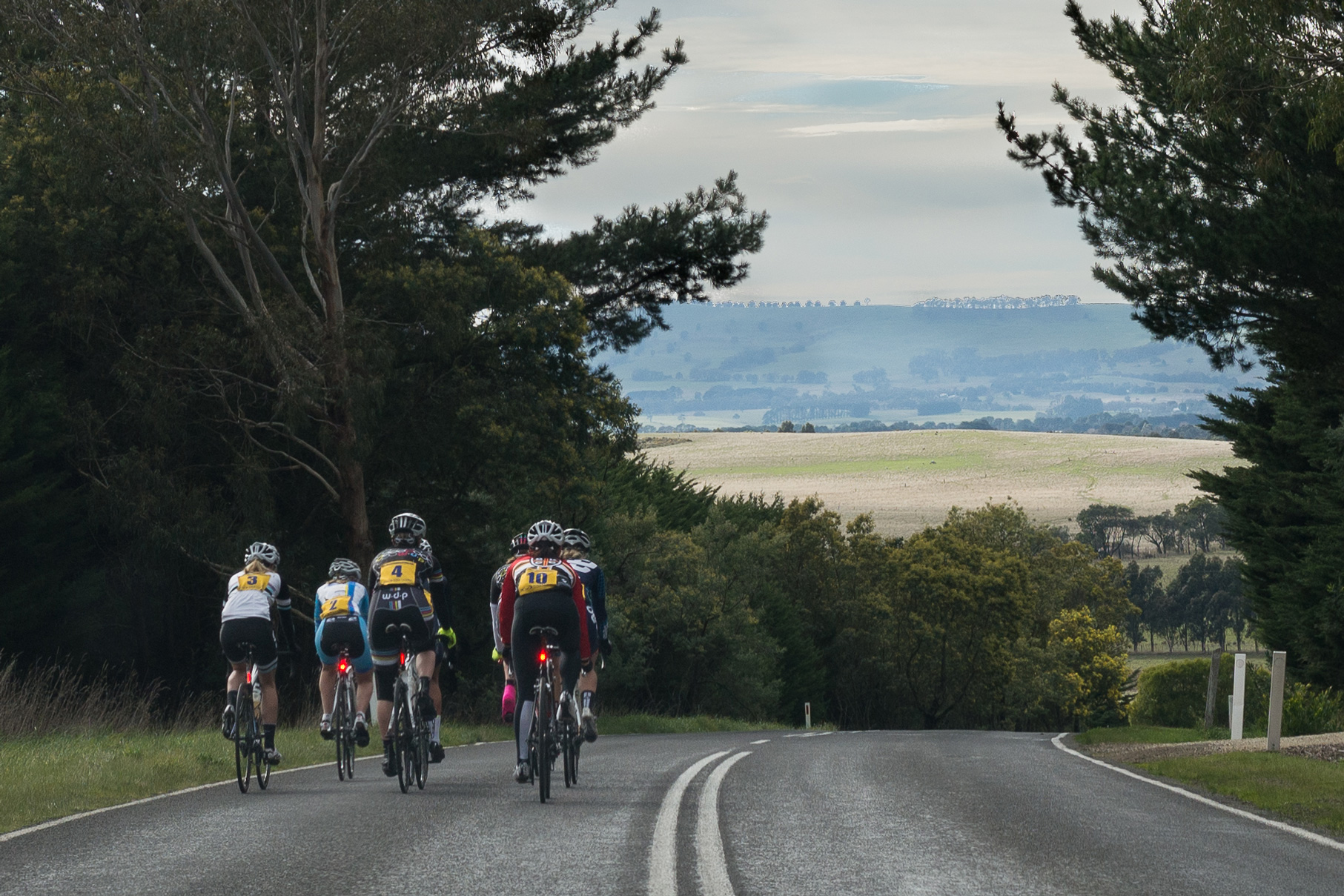 Saturday saw the sun venture out and the wind drive the clouds away to create perfect conditions for the 140-odd tough competitors at Newham for the 2014 SKCC Trophy Race. It was good to see clear skies and dry roads after what seems to have been a ‘proper’ Melbourne winter! The Newham course is a favourite with many Northern Combine riders, providing an interesting mix of flats and hills on a thirty kilometre circuit with wonderful hot mix bitumen, relatively free of traffic. The day saw exciting racing in all grades, and especially in both the top men’s and women’s fields. The final climb to the finish line provided an exciting conclusion to the day’s racing!

A trio of Pat’s Veg riders took the honours in men’s A Grade; with Alistair Crameri Drew Morey and Damian Drapac on the podium, resplendent in their orange Rapha après-vélo jackets. The A Grade women’s race saw a two-rider break in women’s A Grade disappearing up the road from their bunch at the 23km mark to take a clear win by over a minute. SKCC’s Clare Morgan demonstrated perfect race-craft, waiting until the last moments on the final climb to outsprint Georgina Beech. The partnership worked extremely well to stay away from the bunch, as well as third-place finisher Cristine Foster, who found herself in no-woman’s land half-way into the race, unable to bridge the gap, but with enough firepower to stay clear of the bunch to deliver a SKCC 1-2-3.

The final placings across the grades were as follows:

The following is a brief wrap-up of the race, as seen through the eyes of one of the 2014 SKCC Women’s Development Squad, Amy Tan:

I don’t think today was as cold, but then, we did go a bit faster than on Sunday’s training ride. It was my first women’s race, which was MUCH more pleasant than mixed! Amazing!

I managed to hang on til the first/second hill of the second lap, losing contact around the first left turn. The marshal stayed with Julie Jackson and I, who were the last to drop off. He towed us back for a bit and got us working together (sitting on his wheel!) around McMasters Rd. I dropped Julie before Three Chain Rd and thought I had a certain time trial to 4th, then I saw them approaching behind me somewhere along Three Chain Rd. I sat up and waited for them, and then our ride marshal pretty much towed us back to the finish!

I started to crack physically & mentally around Cobaw Road and Julie was long gone by the time we turned onto Dons Road.

Simon the marshal sat with me and towed me back, encouraging me to catch Julie to get 4th. It was hilariously painful! I eventually caught her just at the uphill finish; never thinking I’d see her til the race was over! He was pushing me to stand up and sprint to catch her, I tried but my legs had packed it in! She kept looking back because she could hear me coming, I was breathing so hard! She just beat me on the line and I was spent. So close, but so far – mixed feelings on that!

Overall it was a good race, lots of other comments about how it could’ve and should’ve panned out, with the marshals not really controlling the race and all. I was very grateful to have Simon pushing me and helping us. The women’s races are definitely much more enjoyable than the other 2 mixed races I’d done, getting dropped early on and ITT-ing to the finish! Definitely keen to do some more races!!

It was definitely a fun day because it was the SKCC trophy and lots of SKCC people there. I think I enjoy the bits before and after the race much more than the race itself. Seeing everyone and chatting to everyone, taking pics! It’s great fun!!

Thank you, Amy, and thank you, as always, to all the volunteers, without whom we could not run these races!

Special thanks to Chief Commissaire Luke and Commissaire Abby who gave up yet another Saturday to run a Combine race. Thanks to Ernie and Jeff who answered Gaelene’s call for SKCC Commissaires to help out.

(Image of women’s B Grade courtesy of Ernesto Arriagada)